A night under the stars

On my most recent trip home to Houston, my parents and I went to Clear Lake for an evening sail on our boat. The weather was good, the waters calm. After a busy day, we were looking forward to the relaxing rhythm of the waves and the fresh, salty air.

Unfortunately, when we got to the marina, we found several inches of water inside the cabin. Somehow our sailboat had partially flooded! So instead of a leisurely night enjoying the surf and the breeze, we spent two hours with a plastic bucket and a leaky pump, bailing out the stale and murky water.

By the time we finished, we had mosquito bites on our ankles, our clothes were spattered with dirt, and our skin was covered in a fine layer of seawater and sweat. Anyone in their right mind would have been miserable. And yet, my parents and I smiled and joked as we headed to the bathrooms to clean up.

Upon reflection, I realized that in a weird way, I actually enjoyed that night of gross, sweaty work. Because my parents and I were spending time together. Because I was helpful to them.

As an only child, Ive always had a close relationship with my parents. But now that I live so far away, I see just how much we did as a family, and how hard it is to do that kind of stuff now. Thanks to technology, my parents are never more than a phone call or an email away, but its not the same as hopping in the car for ice cream at Dairy Queen, or going to see a movie on a whim, or just hanging out at home with the TV on, all of us sitting in our reserved seats on the couch. Things that I used to take for granted. Things that arent so easy anymore.

Whenever I visit home, my mom asks if I want to do anything, and my dad asks if I want to go anywhere. Favorite restaurants, new museum exhibits, the beach at Galveston, even Austin or San Antonio. I know they just want me to have fun, but I always tell them not to go to any trouble. They cant understand why.

That night, after our decidedly not-relaxing evening on the boat, we put our swimsuits on, rinsed off, and then hopped into the community pool at the marina. Beneath a dark sky filled with stars, we floated on our backs and kicked our legs. We sat on the deck chairs and ate cherries. We talked and laughed and talked some more.

I guess thats the real reason that night didnt feel miserable to me. Thats why we dont need to go anywhere or do anything special. Because were together, spending time as a family again. And thats enough.

END_OF_DOCUMENT_TOKEN_TO_BE_REPLACED 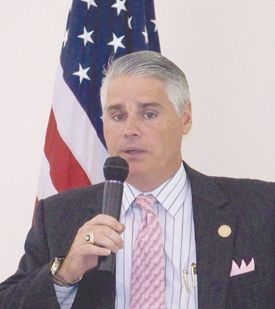 HIGHLANDS State Representative Dan Huberty paid a visit to a district that he will probably not represent after the courts certify the redistricting lines. Huberty said he expected that decision in November, but was glad to visit with the Highlands-Lynchburg Chamber in the meantime.

His talk at the regular luncheon meeting of the Chamber was about the bills that passed or did not, in the 82nd Legislature that finished in April. Huberty was a freshman legislator, representing District 127, everywhere from his home in Kingwood to Highlands.

Because he had served on the school board in the Humble ISD, he was appointed to two committees: Public Education, and State Affairs. He said that he was comfortable and knowledgeable in both areas, and thought these were good appointments.

The legislature originally considered over 6000 bills, and finally passed 1387, but it spent much of its time working to balance the budget and avoid a shortfall in the two-year budget. Originally the shortfall seemed to be about $27 billion bienally, but after cost reductions and the comptroller certifying additional revenue, the shortfall came down to $4 billion. The total budget for two years ended up at $172 billion. Some costs were met by tapping in to the Economic Stabilization Fund, or so-called rainy day fund. This was originally $9 billion, but only $5 billion now remains for future emergency needs.

Huberty said that some of the important legislation that passed included the following:

— Voter ID bill, which will require voters to show a photo ID

— Loser Pay bill, meaning that a loser in a court lawsuit will have to pay the legal fees of both parties. This is meant to discourage frivolous suits

— Fracking bill, requiring Oil Company E & P divisions to disclose what is being injected into the soil to recover shale oil

— Silt bill, restricting illegal sand mining on the San Jacinto River, which is filling up our reservoirs

Huberty noted that a number of bills passed that were not as serious as the previously mentioned laws. In particular, he said the following were necessary but in many cases humorous:

— HB2189, Catfish bill, allows noodling or fishing for catfish with only your hands

— HB713, Ferol hogs may now be shot from helicopters

— Dominoes bill, making this the official State Game of Texas

— HB250, permitting the continued manufacture and sale of conventional light bulbs inside the state of Texas, in spite of a federal regulation that will outlaw them nationally in a few years.