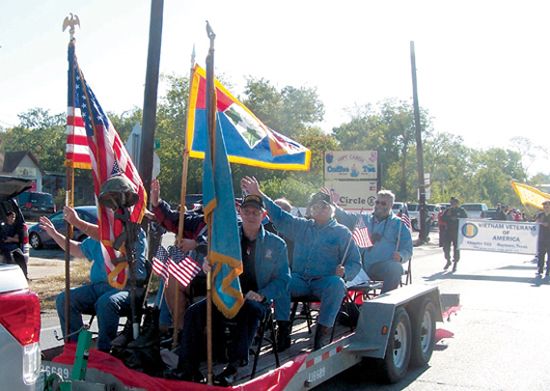 CROSBY  Few here were not aware that freedom isnt free, yet the toll paid for just one conflict in the Twentieth Century is told on the Vietnam Veterans Memorial Wall and the Traveling Vietnam Memorial Wall brought the visualization of how great that sum to this community.

Last weekend Son Harvest Church and D.O.V.E. Ministries enlisted the aid of this extended community to accomplish the realization of honors not yet bestowed on those that answered the call to arms to stop Communism half a world away in a tiny country few had heard of prior to that call.

The personal experience of finding one name of someone experienced as a living person and then realizing that all those names were of real people brings the soul to a stunned morning.

There were numerous ceremonies to honor those that served and serve. Escorting the wall to Crosby was accomplished with about 160 motorcycles and several classic cars on Thursday at about 9:25 a.m. Then veterans from around the country congregated and fellowshipped inside Crosby American Legion Post 658. Within an hour volunteers began to erect the Vietnam Traveling Memorial Wall.

On Friday at about 5:15 p.m. Crosby American Legion David H. McNerney Post 658 became the official name with a dedication ceremony that lasted until about 5:45 p.m. About a dozen men of Company A, 1st Battalion, 8th Infantry Division that served with Sgt. McNerney in Polie Doc, Republic of Vietnam on March 22, 1967 and members of his family attended and paid tribute in speech to the Medal of Honor recipient. Rev. Robin Butler of Crosby First Baptist Church led the invocation.

Other men that served with McNerney expounded that A Company was in effect rescued by B Company on that day but that remainder of A Company would come to the rescue of B Company a few days later during a night action after B Company was overrun. In both cases the companies had been surrounded by larger numbers of North Vietnamese Regulars.

The Crosby-Huffman Chamber of Commerce held a Fish Fry and Bingo Dinner at the Crosby High School Commons at 5:30 p.m. that day.

Conversations at the Wall tell interesting facts. Bill Hearn, a Crosby resident and Marine that served in Vietnam said, There was a Houston Post article that was sent to me that said that per capita more men served in Vietnam from Crosby, Texas than any other small town in the United States.

The first person to die listed on the Wall is Dale R. Buis in 1959 at Biehoa, Republic of Vietnam.

Opening Ceremonies for the Wall followed a parade at 10:00 a.m. Jeff Moore of Sterling White Cemetery gave the opening remarks. Lynnette Crainer of D.O.V.E. Ministries was master of ceremonies with Don Guillory of the Legion.

A Sunday service was presented by Rev. Richard Amador of Son Harvest Church with the largest crowd attending any of the events save possibly the parade.