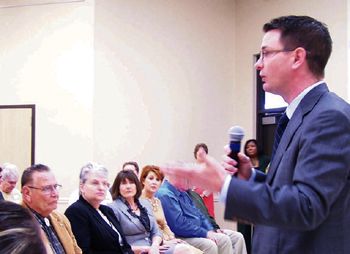 CROSBY  Precinct 2 Commissioner Jack Morman was received with a packed house at the Crosby Community Center on Wednesday morning, Feb. 22 and he was there to listen.

If there is anything to take from this meeting it is that we are working for a smooth transition, we are going to work our tails off to see that that happens. said Mormon of taking over from Jack Cagle after Harris County Precincts changed with redistricting and now most of East Harris County including Crosby and Huffman are part of Precinct 2.

He introduced Precinct 3 Constable Ken Jones to speak briefly and Jones pointed out that he has been working with the commissioner on issues that effect the public in local neighborhoods. Jones pointed to the initiative shown by the commissioners four visits to his office and the high quality of people he has brought to work for him.

The first problem brought to the commissioners attention was for permanent voting locations for neighborhoods. That may be a matter of redistricting of the School Boards but Morman answered clearly, To be perfectly honest right now with redistricting up in the air, we dont know what the State process is going to be, said Mormon.

As of March 1, we will be taking over this Community Center. One of the things Im going to need your help on is identifying where the hot spots are. One of the things I have been working with the Precinct 4 Commissioner is: where his programs have left off.

Residents were told that the Lynchburg Ferry has come under Federal Control and new regulations require that the number of passengers and vehicles must be counted. Right now there can only be six passengers aboard. The Ferry is under Coast Guard regulations.

A new initiative called Better Streets 2 Neighborhoods was announced as an outreach to solve road problems that came up following the drought and then increased downpour as well as the on-going struggle against increasing populations and ever decaying roads.

We are going into neighborhoods finding roads that need work and they may not even be county roads and we are redoing the roads, said Mormon.

According to the Chairman of the Crosby-Huffman Chamber of Commerce Glen Cole, This is a great opportunity to meet the new commissioner. He listened to a lot of questions and had some fine answers. He seemed like he wanted to hear what the needs of the community were and was ready to work with us.

END_OF_DOCUMENT_TOKEN_TO_BE_REPLACED 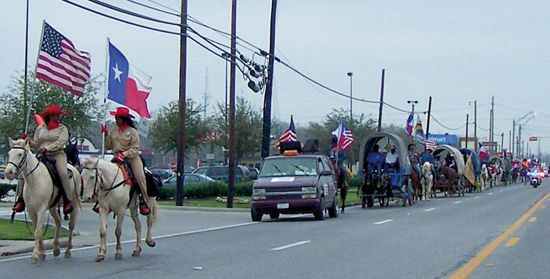