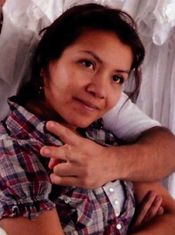 HIGHLANDS  A womans body found in the San Jacinto River early last Saturday has tested to be that of a Beaumont woman last seen on Feb. 27.

A fisherman near Monmouth Road under Interstate 10s bridge called authorities concerning having spotted a body in the river mud at about 7:40 in the morning on March 3.

Reina Cornejo-Triqueros, 37, was last seen on Feb. 27 when at about 8:00 a.m. she left home to go to work at Willy Burger in Beaumont. At about 9:00 a.m. she telephoned her supervisor from a Sour Lake pay-phone to say she was running late.

Harris County Sheriffs Deputies arrived at the river at about 8:00 a.m. March 3 and saw that the remains were shrouded in a shirt like the one described that Triqueros was wearing the last time she was seen by her family.

Acting on a tip, Jefferson County Sheriffs Office Investigators discovered her partially burned truck under U.S 59 at Hamblin Rd. in Kingwood two days before the body was found. There was physical evidence within the truck that indicated there had been a violent struggle inside.

A warrant has been issued for Jesus Roman-Castrejon, 52, of Conroe. Montgomery County Detectives allege that Reina was seen in Castrejons neighborhood days before the truck was found and that office sought the warrant. Some members of Reinas family had stated that Castrejon had befriended Reina when they worked together in Houston. He wanted the friendship to be more but was rebuffed by Reina. Jefferson County Sheriffs Investigators had called Castrejon when she went missing but were told he had not seen her.

The Texas Rangers, the Drug Enforcement Agency Air Wing, Houston Police Marine Division and the U.S. Marshals office have now joined the search for Castrejon. Authorities say the undocumented fugitive has probably fled back to Mexico but another source says he has gone to California in cooperation with a gang in that state.

Crimestoppers is offering $1000 for information leading to an arrest of Castrejon, call 713-222-tips. Your information remains anonymous.

Reina Cornejo-Triqueros had lived in this country for 12 years with 3 sisters and was mother to a six year old. Her body has been released to her family.