Students Helping Local Businesss One Breakfast Taco at a Time

SAN MARCOS, Texas  Every Monday through Thursday members of Students in Free Enterprise sell Lolitas breakfast tacos in the quad at Texas State University. They sell 200 tacos everyday for $2 a piece.

Lolitas Café is a popular breakfast restaurant in San Marcos. SIFE wanted to increase their revenues by selling the tacos in multiple locations, so this is what they did. They recently bought a freezer, fridge, and two grills for Lolitas shop. SIFE student Jared Trimm says, I love the smiles on peoples faces when they receive their breakfast taco. This project has been very successful, and it is all because of the hard working students in SIFE.

SIFE is a global, non-profit organization that is literally changing the world through highly dedicated student teams on more than 1600 university campuses in 40 countries. SIFE offers these students the opportunity to develop leadership, teamwork, and communication skills through learning, practicing and teaching the principles of free enterprise, thereby improving the standard of living for millions in the process.

Texas State SIFE is one of the leading collegiate teams within the United States. SIFE has been helping others achieve their dreams through free enterprise education for more than 25 years. Today, SIFE is the worlds prominent and largest university-based free enterprise organization.

END_OF_DOCUMENT_TOKEN_TO_BE_REPLACED 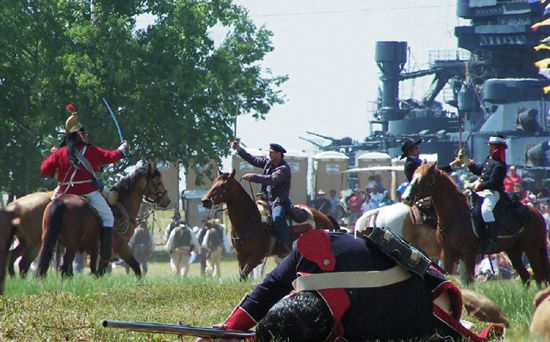 This dramatic battle reenactment is the centerpiece of the admission-free San Jacinto Day Festival, held on Saturday, April 21, 2012 from 10 a.m. to 6 p.m. on the grounds surrounding the San Jacinto Monument.  Highlights of the Festival include family entertainment, living history demonstrations, a childrens area and vendors reflecting all things Texas.

The largest battle reenactment in the state celebrates the 1836 Battle of San Jacinto, and its the most popular event of the day, it begins at 3 p.m.  Presented by hundreds of members of the San Jacinto Volunteers and other living history organizations from across the state, the reenactment dramatizes the decisive battle where General Sam Houston led his Texian soldiers to victory over the Mexican Army eventually leading to almost one million square miles of Mexican territory becoming a part of the United States.  The reenactors will dramatically interpret the Runaway Scrape (Texians fleeing from the advancing forces of Santa Anna), the cannon duel and the final battle between the two forces.

Some entertaining and educational activities scheduled as of March 27, 2012 include:

New this year: The Coleman Brothers:  The Coleman brothers are true road warriors from Texas who have toured with Willie Nelson, Ray Price and many other Texas legends.  They had two #1 independent hits last year with Beer Thirty and Down by the Fishin Hole, and are known for their pure true-to-life country music and trademark layerd vocals.

New this year: J. R. Ancira: J. R. Ancira is a solo acoustic, singer/songwriter that specializes in country, with a variety of cover songs plus his own originals.  J.R. has been singing and playing guitar for the past 20 years and has a one-of-a-kind voice.

Dr. Jesús F. de la Teja – the former State Historian of Texas, and presently the Distinguished Professor of History at Texas State Univ. and a board member of the San Jacinto Museum – will present a talk on Antonioo Menchaca and Santa Anna: An Unlikely Encounter at 12:30 and 1:30 in the Monuments theatre.  Menchaca is one of the Tejano heroes of San Jacinto who had an encounter with Santa Anna following the generals capture the day after the battle.

Visitors can wander freely among the Mexican and Texian camps of the reenactors to learn what the soldiers of that day were doing prior to the battle in 1836.

Monument visitors can take the famous 489-foot elevator ride to the top of the Monument; enjoy the digital presentation Texas Forever!! The Battle of San Jacinto; and view the museums latest exhibit Making a Mark, Leaving a Legacy.  Combo tickets for the elevator ride, the exhibit and movie can be purchased for $12 for adults, $10.50 for seniors, $8 for children.

For the Texans, their victory at San Jacinto led to Texas annexation into the United States, says Robert B. Hixon, Chairman of the Board, San Jacinto Museum.  In the end, the United States would gain not only Texas but also New Mexico, Nevada, Arizona, California, Utah and parts of Oklahoma, Kansas, Colorado and Wyoming.

Tips to further enjoy the 2012 festival:

Do not take the ferry on I-10; because there is only one ferry working right now, the wait is long.

Visitors are encouraged to bring lawn chairs and/or blankets for comfortable viewing of the battle reenactment.

END_OF_DOCUMENT_TOKEN_TO_BE_REPLACED 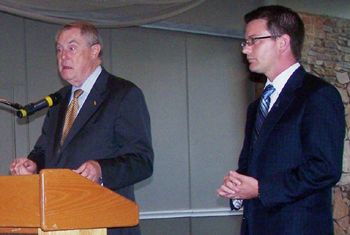 On March 29, the courts determined that District 127 had too many people and Dan Huberty had to give Crosby to Smith and Huberty retained most of Huffman, and west through Humble. Smith a Vietnam Veteran has been given the Outstanding Public Servant award by the Texas Association of Businessmen and is named a Conservative Leader by the Heritage Alliance.

Jack Morman, R, gained the largest land area of Harris County for his Precinct 2 in redistricting. But Precinct 4 now condensed in acreage and expanded in per capita income retained all the mowing and other service equipment it held under Jerry Eversole. Morman now controls 380 employees, 50 parks, 11 community centers and 1050 miles of county road.

There are two infrastructure projects that Commissioner Morman has initiated in the last 30 days within the Crosby/Newport area.

It is our intent to bid this project the first quarter of 2013. The estimated project cost is $2 million. said Morman

BetterStreets2Neighborhood is the base repair and resurfacing of asphalt street in the Crosby, Nelson Subdivision, Jackson Bayou Community and outlining areas. This project is already in design and will start construction mid-summer to be complete in 45-60 days. The estimated project cost is $2 million. Maps of the street locations will be available at the Chamber of Commerce luncheon Thursday.

Mowing in Crosby has already begun with complete mobilization of 8 mowing crews starting in May.

Commissioner Morman spoke directly to each question asked about managing streets and improvements. His challenge for the future will be to purchase the right of way for the proposed widening of FM 2100 from Crosby to Huffman to give to the TXDoT to build the highway.

Smith although stating flatly that he was at the meeting to hear questions from the audience explained some of the functions of the State Legislature.

We meet officially for 140 days every odd number of years. The states big battle is 125 million people with a $180 billion annual budget and last year it was $170 billion because we cut much of it out. It is a big state and we need more than 140 days set by the constitution so we continue to meet, I was over there last weekend. Im chairman of a committee, environmental regulations, that is the committee that has oversight into TCEQ that issues the permits for all of the industry in this District, you can see my district includes from the industry from Pasadena, out to Baytown all the way up to part of Huffman. The speaker was gracious enough to appoint me to the committee I wanted to be on, so Im working to see if we can create jobs for folks in our area. The last cycle was the sunset of environmental regulations, in Texas every agency ceases to exist if not reauthorized approximately every 12 years sometimes it is shorter. This was TCEQs time to be sunsetted, so I then as chairman of the committee was asked to carry the bill for the sunset and we have sunsetted. I am extremely glad that I get to represent Crosby.

Smith spoke of the proposed widening of FM 2100 from Crosby to Huffman as on the charts to begin within the next three years. He is awaiting TXDoT to inform him of when the proposed exit off of U.S. 90 Westbound to FM 2100 will be completed. He asked to be informed of guardrail problems by the public.

END_OF_DOCUMENT_TOKEN_TO_BE_REPLACED

CROSBY  This Saturday April 21, according to the construction supervisor of the overpass at FM 2100, through lanes will be narrowed to one lane in each direction.

The upcoming bottleneck is sure to slow traffic as the new roadway for FM 2100 is being built. The website: www.visitcrosby.com promises to keep web saavy commuters up on changes to the surface street conditions.

Two sections are to undergo changes as construction of new roadways begin in earnest to complete the proposed overpass and roadway improvements including softening the curve near the Chevron Station North to South Diamondhead.

A section of South Diamondhead before FM 2100 is to undergo widening. This Saturday it will narrow to one lane as it will receive State construction from the first turn out to FM 2100 and continue as one lane in both directions all the way up onto Edna Road.

This Saturday from the traffic light at Wahl Street all the way to the curve on the other side of the FM 2100 roadway from the beginning of First Street the roadway will narrow to one lane in each direction.

Traffic is expected to remain in this configuration for several months. It is expected to be finished by Summer. At that time a new frontage roadway, currently under construction that is to become ultimately the northbound lanes, is expected to have been completed.

Final completion of the overpass project is expected to be in the Summer of 2013.