On resolutions and the new year

Sometimes turning the calendar to a new page isn’t enough. For a fresh mindset, I need a bigger, bolder signal of change. So I pick a different desktop picture for my computer; I rearrange the furniture in my living room; I cut my hair.

Still, the world is not new, and I don’t have a clean slate.

Every January, I have to come to terms with this all over again. I have to remind myself that the new year isn’t about a new me. It’s about a better me. Resolutions are meant to build upon the foundation we already have — to improve it, not erase it.

I think the best resolutions are small and simple. Something like Become a millionaire sounds great in theory, but it’s too big, too vague. Resolutions should be achievable — with clear, actionable steps that are completely within your control.

I prefer to make just a couple resolutions each year, in order to set myself up for success. After all, if these things were so easy to do, wouldn’t I have done them already?

This year, one of my resolutions is to make better use of my to-do list. I read somewhere that the best to-do lists have no more than 5-6 items per day. More than that and people start to feel overwhelmed. If/when they can’t cross everything off, they feel like they have failed. Plus the unfinished items carry over into the next day, along with their negative outlook.

So I plan to assign only a handful of tasks to each day, and to tackle them one at a time in an efficient and timely manner. It may sound small, but I think the ripple effects will be far-reaching.

Since moving to New York, I started recording my new years resolution as a pithy statement on my cell phone. The first year I moved here it was Dont forget about you, to remind myself that I should stand up for my own decisions. Last year it was Help others. For 2012, I chose Dream big. Act bigger.

There are many things I would like to learn this year, from expanding my skills at work, to learning how to surf and ski. I also would like to continue traveling to other countries, seeing new sights and experiencing different cultures. Do I need a resolution to accomplish these goals? Of course not. But it helps.

Unlike Kristan, I find the point of a resolution is not to set measurable goals, but instead to shape your values and beliefs into something important. Resolutions create a focal point, and they represent your commitment to accomplish something you never thought you would. Seeing my new mantra on my cell phone every day helps frame my thinking and influence my actions in the right direction.

For example, there is a particular goal that Ive had in mind since last year. Dream big and act bigger is a promise to myself that I will work hard to achieve it, continuously pushing myself out of my comfort zone without comprising who I am. That may mean I accomplish the goal, or it could mean along the way I change my course. But as long as I try, then I know Ill be happy.

It also means I will look beyond myself and understand my impact on my peers. My decisions may be for myself, but we only reach them with the help of others.

This past year I have been very grateful for the faith that my family, friends and colleagues have in me, along with the opportunities Ive been given. But I know there is more that I can learn as well as contribute. So I cant settle for the status quo. I have to dream big and act bigger.

END_OF_DOCUMENT_TOKEN_TO_BE_REPLACED 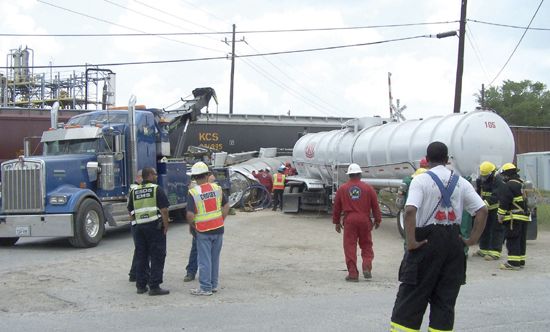 CROSBY  At about 11:50 on Monday, May 7, this area learned again why the expression, train wreck. applies to many forms of mayhem.

A truck turning from Crosby-Dayton Rd. onto Ramsey Rd. had the right wheel run off the pavement and it stopped with the cab still on the train tracks. The truck crew of two men were in the process of calling for help when they saw the train coming. It was a Kansas City Southern Railroad freight train and it tried to stop at about a quarter mile from impact with the truck.

The crew abandoned the cab a few seconds before impact in the East direction, the direction from which that train was coming. They were not injured and the train engineer was not injured either.

The accident pushed the cab of the vehicle in crumpled state down the tracks ahead of it. The tanker trailer detached from the impact.

A witness says he was watching, did not want to see it but could not turn away.

According to R.W. Bob Royall, Chief of Response and Recovery for the Harris County Fire Marshals Office and the Harris County Hazmat Team, the substance within the truck was polyethylene glycol, similar to the coolant used in internal combustion engines.

It dissolves in water, it has a low toxicity. The good news is it is going to be a limited clean up. We were told there was 4750 gallons in the tank. It has been compromised on the end near the train. At the head of the tank there is a gash. Estimates are probably 10 gallons or less leaked when it happened.

Royalls team is part of the agency that is responsible for unincorporated Harris County.

Royall responded to questions about human damage, I understand from having talked to the engineer that the truck tractor is still attached to the engine. There were two people in the engine of the train, both the engineer and the conductor and they both are safe.

The owners of the truck was Bryants Transport Inc.

First on the scene following the incident was ESD#5. Also responding were the ambulance crews for Crosby, the Crosby Volunteer Fire Department, Harris County Sheriffs Department, the railroad was present on both ends of the accident, Harris County Pollution Control was present because there was a small release. The trucking company representatives came to the scene.

It is a multiple agency response. said Royall.

END_OF_DOCUMENT_TOKEN_TO_BE_REPLACED 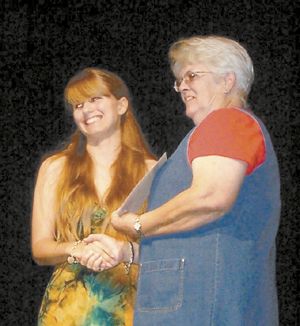 Crosby High School held their Scholarship Awards program on Monday night, with Seniors receiving over $1,000,000 in money for further education. In addition, a number of named scholarships, and awards from local organizations were presented during the evening.

The ceremonies were emceed by Dr. Marley Morris, CHS principal. Many outstanding students were honored, and these included the top athletic scholarship to Donny Starks, of $97,492 for football at Kansas State University, and the top Academic Scholarship to the #1 graduating student, Valedictorian Erin Valentine. Ms. Valentine was awarded a total of over $651,000 in scholarships, and has her choice of Georgetown, Harvard, Princeton, and University of Texas Austin.

One sad note to the evening was the fact that several of the awards went to Cody Stephens, who had unfortunately died the day before the ceremonies.

Beta Sigma Scholarship, to Heather Dorrance, who was #2 Salutatorian in the class. Ms. Dorrance received a total of $79,600 in scholarships.

There were many other awards, too numerous to list this week, but there will be further coverage and photos in next weeks edition.

Academic Honor Awards were presented by various departments of the high school, and other scholarships given by the American Legion, UIL Scholars, and awards for Honor Roll and Attendance.

Dayne Robins gave special recognition to the Top 10% in the graduating class, and Dr. Cap Roder called out the names of the Top 10 graduating Seniors.

The auditorium was filled with parents and students honoring the accomplishments of these seniors.