Back in March, I fell and injured my knee. There was no bruising or swelling, but I couldn’t straighten or bend my leg all the way, and everyday movements caused me significant pain. At first I feared that I would need surgery, and I spent a lot of time and tears worrying about that possibility. But after several hospital visits — and even an MRI — my doctor could find nothing to operate on.

To my surprise, I was disappointed by that news. As much as I had dreaded surgery, I appreciated the concrete-ness of it. It was a solution. Once it happened, I could heal. Instead, my injury remained a mystery, and the only remedy my doctor could prescribe was time.

My doctor did suggest that I try some physical therapy to strengthen the muscles in my leg and ease the burden on my knee. Half a dozen basic exercises to be done for 30 minutes twice a day. How could this possibly help? I wondered. But after just two weeks, my range of motion improved, and the frequency of my pain decreased. On the outside everything looked the same, but on the inside things were happening.

It occurs to me now that much of life passes in this way: below the surface, making progress that can hardly be noticed, much less quantified. How close are you to getting that promotion? How much longer until youre over that breakup? When will your panic and your joy over having a newborn settle into a comfortable rhythm?

Of course it would be great if there were clear, concrete actions that we could take to speed up these processes, but in most cases all we can do is press on and hope for the best. We may feel like nothing is changing, because we have no proof, no measurements. But even the tiniest of improvements add up, like grains of sand, building upon each other gradually, until one day youre on a beach.

Even though I cant see it on an X-ray or calculate it in numbers, I know Im headed toward that beach. Someday Ill be running across the sand full-speed, with no pain in my knee. I just have to trust that Im making progress each day. I just have to give it time.

END_OF_DOCUMENT_TOKEN_TO_BE_REPLACED 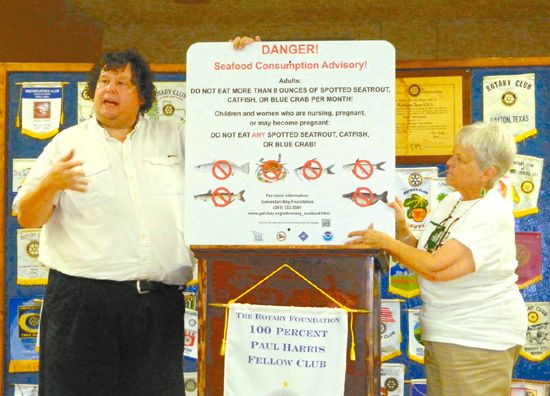 HIGHLANDS – Rotarians at their weekly luncheon heard a preview of a public meeting to be held this Thursday, June 14th at the Methodist Church, regarding new tests that indicate poisons leaching from the Toxic Waste Site in the river continue to be a public health threat, and may have even increased from earlier levels of toxicity.

TexansTogether, and the San Jacinto River Coalition have teamed together to bring this information to local residents. They will host representatives of the Texas Commission on Environmental Quality, and the federal Environmental Protection Agency, at the meeting on Thursday night, according to Sarah Davis and Jim Strouhal of the Coaliltion. The public is invited to attend, and hear the latest test results and an update on planned actions of several involved parties.

In a statement issued by the TexansTogether organization, they said:

Dr. Stephen King, the Houston toxicologist who wrote the report, states that near the San Jacinto River Waste Pits (SJRWP) Superfund Site that wading, swimming, fishing, crabbing, and collecting oysters and clams should be banned. It is strongly recommended that the consumption of fish, crabs, oysters, and clams caught in proximity to the SJRWP among vulnerable or at-risk individuals, such as pregnant women, infants, children, the elderly, persons with impaired liver function, and among individuals with an impaired immune system be prohibited.

Dr. King took sediment and seafood samples in proximity to the SJRWP in September 2011 after completion of a 2011 temporary remediation capping the Waste Pits. Laboratory analysis show that current levels of toxic dioxins and furans are similar to levels found by governmental authorities in 1990 and 2005 indicating serious contamination remains in the San Jacinto River that flows into Galveston Bay. These toxic wastes came from the Champion/International Paper mill in Pasadena. They were dumped in the 1960’s at a 25 acre waste pit site (now owned by Waste Management), on the banks of the San Jacinto River, where it crosses I-10 East. Subsequently submerged, these toxic wastes have been spread for years by the current throughout the River. Sarah Davis, a resident of nearby Highlands and a San Jacinto Coalition member, said, We deserve a clean and safe river. Waste Management and International Paper should remove all their dioxin and other contaminants from the River.

The report and laboratory analysis was funded by a grant received by Texans Together Education Fund, a 501c3 civic engagement non-profit organization, from the Kirk Mitchell Environmental Law Fund.

END_OF_DOCUMENT_TOKEN_TO_BE_REPLACED 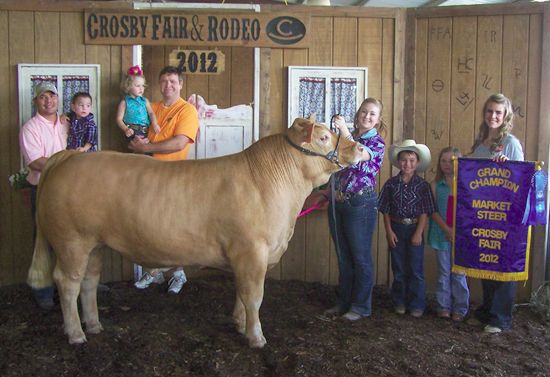 CROSBY  The Crosby Fair & Rodeo hosted their annual Livestock Auction and amassed an impressive $284,450 after the updates and resales.

This year, unlike others, the Grand Champion Steer was not the top sale although it went for $11,500 to Ashton Walker for CertiFab Inc. it looked as if the steer would not gross above $6,000 but the auctioneer, Ed Phillips, reminded the audience of the importance in community recognition and elevated the sale beyond last year. Phillips has been with the Crosby Fair & Rodeo for the last 25 years.

According to Doug Hall, Chairman of the Crosby Fair & Rodeo, We appreciate the communitys support. One of the things I especially appreciated was that the prices stayed somewhat mutual throughout the sale. One of our traditions is that we try to take care of kids participating without prices falling off towards the end of the sale.

This year Cody Stephens Grand Champion Hog was sold for $13,750. There were three fajita barbecue pits made by Cody Stephens F.F.A. class sold as the auction was going on and the net results of this sale according to Scott Stephens is intended to go to making a scholarship fund in the name of Cody Stephens for Crosby High School Graduates.

Hall said, It was a really good pig. We appreciate the fact that some of the other kids stepped up and got his animals exhibited, his pig, steer and his lamb. The Stephens family and the Fair board did not want this one aspect to eclipse the rest of the auction. The Stephens family has been great supporters of all aspects of the Crosby Fair & Rodeo and continue to support us. We wanted everybody to get a chance to benefit while making it possible to respond to the needs of the entire community grieving over the loss of a good participant. I feel like that everything worked out the way God intended and we accomplished that in my opinion.

Scott Stephens said, This year Cody made that game winch that about 50 of my friends went in together and bought it for about $8,000 and gave it to me. The big smoker pit was donated. The Cody Stephens Memorial Scholarship Fund is at Community Bank of Texas and donations are still being received to make it a permanent scholarship fund. We are trying to get it to a level where it is going to be perpetual. Right now it is somewhere between $67,000 and $70,000. We are going to set it up where it is a foundation either at the North Shore Rotary Club or its own foundation, I have not worked out all the details yet. I have to meet with some attorneys to get all the details worked out. The goal is that the income from that fund will net somewhere between $2,500 and $3, 000 scholarship. Today, I had a gentleman offer his place for a skeet shoot for next spring for another fund-raiser. We are calling it the Go Big or Go Home Scholarship so we are trying to build it and make it a lot bigger. It is not currently enough to do what we want to do with it

Next weeks Star-Courier will display the auction buyers, the beneficiaries and the livestock sold.