After what seemed like one unfortunate event after another after another, officials at the City of Anahuac are working tirelessly to dig themselves out of a debt crisis.

Although the city’s financial situation is a result of a number of factors, the crisis itself started when Anahuac’s water plant broke down in October 2010, mayor Cheryl Sanders said.

To provide water for its residents the city then signed a contract with Trinity Bay Conservation District. Sanders said Trinity Bay served the city at a reduced rate for months but later raised the charge to the normal bulk cost, which came out to almost four times the previous rate.

After looking into other options, the city then decided to go with a company called “Rain for Rent” to handle the city’s water.

“We were presented with a proposal that would cost us $30,000 a month,” Sanders said. “That was something we could afford.”

Unfortunately, the water ended up costing them twice as much as the initial estimate, and now the city has returned to Trinity Bay. But during this, the city was still charging customers less than what the water cost the city.

Sanders said this had gone unnoticed for so long because then-administrator Lance Nauman had been providing “misinformation” to the council. Nauman resigned in July and the Barbers Hill Dayton Press was unable to get in touch with him Tuesday.

Now, council members do not know how exactly how deep city’s debts are, but are scrutinizing its financial records and will hold several budget and public hearings in the next months to determine where to take action.

Problems with water and infrastructure

Although the city has yet to increase its water rates, Anahuac residents have complained about high water bills.

“Water was expensive as heck,” said former Anahuac resident William Bennevendo, who moved out of the city a year ago. “But the price didn’t bother me as much as the quality. I’ll put it this way. I didn’t drink it. Everyone I know personally [in Anahuac] either buys it or has it delivered.”

Sanders says this is because of the city’s rusty pipes, some of which have been in the ground for decades.

“The big issue is the sluffing off of minerals in the pipe,” she said. “With Trinity Bay, the flow is going in the other direction in the pipes [of how it used to go.]”

However, the Anahuac’s pipes are only indicative of a larger issue, that being the city’s infrastructure in general. Aside from debts the city has recently incurred, Sanders said the council still has to set aside money for capital improvements — including replacing the city’s 50-year-old water meters — as well as debt obligations from 1999 and 2003.

Despite this, Sanders said she is confident that the city can make up its debts, and if all goes well, hopes the city can be in good financial shape by as soon as December.

The city has secured a $1.2 million grant to fix its water plant, although it has not been released yet.

Sanders says because of diligent work on the part of city officials, residents haven’t felt the brunt of the debt burden. The city has reduced its positions through attrition, meaning employees who resigned or retired have not been replaced. There are currently only 10 city employees.

“This is all volunteer work,” Sanders says. Council members, most of whom have other jobs, have waved their checks, and many city employees are doing more than in the job description. Sanders herself said she has not seen a paycheck since she took office in May.

“We’ve got a full plate, but we’ve got a great council [who are] wonderful citizens committed to helping the city.” Sanders said. “This is our city too. We want it to be a great place to live, and we want it to be affordable.”

Correction: An earlier version of this article stated that the City of Anahuac had received a $350,000 grant for the repair of the city’s water plant. That grant is actually $1.2 million. The $350,000 is for a project to replace old sewer lines.

END_OF_DOCUMENT_TOKEN_TO_BE_REPLACED 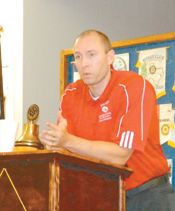 Many eyes were on the London 2012 Olympics this last two weeks, including Rotarians in Highlands that had a special insight into the event, thanks to a presentation from their club member and Olympic hopeful swimmer, Aaron Cole.

Cole trained for almost a year with the idea that he could reach the trials, and perhaps make the USA olympic swim team. But Cole said that his time just wasnt good enough, by about a second, to get to the final trials in Kansas City in June.

The Olympics, known as London 2012, will last from July 27th, the Opening Ceremony, until the final day August 12. Cole said there will be 26 sports featured, with some more popular or well known than others.

He thought the event that most people watched and were most familiar with was swimming, with gymnastics also a popular event. In swim events, well known competitors are Michael Phelps, and Ryan Lochte. Other popular sports with spectators include basketball, soccer, diving, Taekwondo and volleyball.

Many of the competitors are from the Houston area or trained here, and a detailed list of these follows at the end of the article. In Taekwondo especially, Cole said, one family from Sugarland has captured the public imagination. Stephen and Diana Lopez are due to compete and are favored to win medals for the USA.