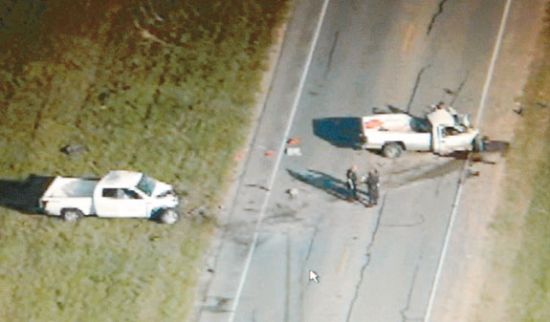 A baby-girl, daughter of Strnadel, was in his dads truck and was airlifted to Memorial Herman Hospital in stable condition and is expected to survive.

Strnadel was taking his daughter to a day care, authorities said.

The accident is under investigation, speed may have been the factor, but authorities are also testing for any alcohol or drugs.

END_OF_DOCUMENT_TOKEN_TO_BE_REPLACED

CROSBY  Phases of construction for the overpass here are coming that will make changes in traffic flow, eventually leading late next Summer to a four lane overpass with frontage roads on both sides and access in both North and South for intersecting roads.

Ultimately, an overpass will stand at the railroad tracks with square columns with an arch at the top, with reveals and striations like a limestone surface. The facade at the middle will look much like the design commonly associated with the Alamo.

In spite of numerous utility issues, finding three undocumented gasoline tanks, and a wet month of June  NBG Constructors, Inc. is hoping to move ahead with switching northbound traffic to the new East side frontage road of FM 2100 later this month.

Plans indicate that this switch, called Phase 2 of Step 1, is to begin the weekend of August 25. That plan is based on being able to complete the change of the intersection of Wahl St., (where the traffic light is at Crosby ACE Hardware) and put in some paving on Riedland Ave., plus sidewalks and driveways.

That seems a lot to get done in the next couple of weeks and it could lapse over into the following weekend, according to David Boehm. Boehm is over the entire project for N.B.G Contractors, Inc. General/Highway Contractor and works with the Texas Department of Transportation (TXDoT) to fulfill the design specifications for an overpass of the railroad tracks across FM 2100 between Kernohan St. and Jackson Bayou.

One factor that came as a dull surprise was that the completion of the project may be in August or September of next year depending on the number of surprises the construction encounters during the process.

We have found all of the utilities on the East side, I can tell you that for a fact. Boehm joked in reference to surprises encountered with utilities including the natural gas lines being next to power poles, three unexpected gasoline tanks and other utilities not being where they were expected to be. Power pole had to be braced last weekend for work to continue on the storm sewer that runs the length of the project all the way to South Diamondhead.

Sometime in September of this year, the roadway will consist of two lanes North on the East sides new frontage roads and one lane South, all new roadway on the East side.

After that time, the extant FM 2100 will be torn up, the company will then start laying all the sewer leads and new water leads that will ultimately replace a two inch water line with a new 8 inch plastic water line.

The project is being built on TXDoT specifications and there is to be 5 foot wide sidewalks running the length of the project.

Once the leads have been established, a huge new box culvert will join one already in place on the East side (since January) and work on the West side will begin making the center and southbound frontage road. The 1/2 of that big culvert that crosses FM 2100 between Kernohan St. and Wahl St. is one of the major complications to the project. It will begin late September to October.

It will be tight, answered Boehm, By the time we are finished all the utilities are going to know exactly where everything is, because we will have dug everything up at least twice.

Once these phases have been accomplished, there will be a time in which the constructors will have to switch the water and sewer systems to the new lines and each individual household will be asked to cooperate for a few hours as the switch is put in place.

Residents will be notified in writing and other methods of the approach of this time.

Construction of two sides of the new frontage road is going to be completed near late Spring or early Summer of next year. When that feat is accomplished there will be for some time two lanes running North and South but those lanes will be periodically interrupted for construction of pillars and walls for the overpass as the project nears completion.

One can see the beginning of the overpass constructed now in one wall going up. The overpass itself is to run from Wahl Street up over the tracks to its height and then comeback down on the North side at about equal distance from the track in both directions.

The increasingly frequent trains running through Crosby will cease to stop all traffic at that time. Moving through the center of FM 2100 will be much easier. Precinct 2 will be re-building South Diamondhead Boulevard also.

Incidentally, the completion of the expansion of the Panama Canal Project is thought to be finished in 2014, many wonder if that could mean even more goods and services coming to the Houston Ship Channel via trains, increasing the frequency through our area?

END_OF_DOCUMENT_TOKEN_TO_BE_REPLACED

CROSBY  The new budget for the 2012 -2013 school year passed August 13 and the Superintendent is glad the emphasis is more on instructing students.

The school board also decided to continue with CRE8 Architects from eleven bidders to handle projects for the district. The word is that this firm has been very responsive to the needs of the district.

This is our 4th year of a $0.17 per $100 valuation tax increase in Crosby. There is a 1% salary increase for employees this year and yet a number of teachers have left for retirement and some for higher wages. About 310 teachers work in Crosby ISD, depending on how you define teachers.

Eighty three new educators for Crosby ISD will be welcomed at Thursdays New Educators Luncheon by the Crosby-Huffman Chamber of Commerce. Thirteen and a half new teacher units will be added this year.

In addition to the new high school principal, a new Mr. Walter Barringer will principal at Drew Elementary School. Ms. Warpole is New Assistant Principal at Barrett Primary, she has been promoted from teacher. Karla McGee is the new Director of Special Education.

Overall comparing to other nearby districts this is a very efficient budget per student.

Superintendent Kieth Moore echoed this observation by saying The numbers on operations of district administration for example are at a low for several years which leaves more for student instruction.

Next year the instructional aggregate budget is $21,976,220 at $4,604 per student. A higher percent is to be spent teaching than new transports, shifting around, supplies, services, and fixing situations.

We have to work in partnership with our community when we find things that our school needs. We have to be budget conscience to our community. You know the Catch 22 is knowing that we are growing and our buildings are full. We just have to work in partnership with our present buildings and get us some good buildings that our community will support. The challenge for us in the district is that we need to hit the nail on the head for what our needs are but we are not going to go for all the bells and whistles and the Taj Mahal effects that some may want. said Moore, There is still a lot of work to be done on our budget. We are looking at everything and we may come out of this and determine that we dont want to go out for anything at this time. It appears to me that we are in a position that we need to offer to the community an opportunity to make that decision.

I feel like we are just at the tipping point.

Moore continued later, If you were able to freeze time and say Crosby is going to be just like it is in two years, five years or ten years – you would still have to ask Do we need to expand our facilities? because they went out for a bond issue four years ago because the buildings were full then. We are still growing thats why the buildings are even more full. What we accomplished with the tax increase was we renovated Crosby Elementary School and that took 200 and something kids off of the elementary campuses. Which gave then one or two classrooms per campus. It got them back to appropriate levels.