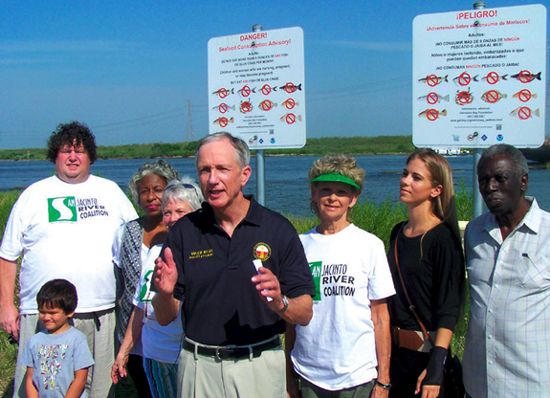 The upcoming holiday weekend attracts more recreational fishing over the long weekend, even as Harris County continues its efforts to address the public health threat to residents by warning them against consuming seafood from the vicinity of the San Jacinto Site.

Although Texas Department of Health has issued a Fish and Shellfish Consumption Advisory for the area near the San Jacinto River Waste Pits, said Ryan, recreational and commercial fishing continues in this area. I am very, very concerned that dioxin-laden seafood is still finding its way to Harris County dinner tables.

Because of the health risks caused by the dioxin, the Texas Department of Health has issued a consumption advisory for crab and all species of fish from the San Jacinto River and warned women who are nursing, pregnant or who might be pregnant and children under the age of 12 not to consume any fish or blue crab from the area. The Health Department also advised adults and children to avoid the risk of exposure to dioxin through skin by not camping, fishing, swimming or picnicking near the San Jacinto River where the toxic waste ponds were located. According to the County, the health of both humans and the local ecology are threatened by releases of dioxin from the waste pond sites.

Advisory signs have been posted but Ryan worries that people are still fishing in dangerous waters. Ryan also points out that lower water levels due to lack of rain in Harris County are making dioxin more concentrated in the river.

What are called Chlorinated Dibenzo-p-dioxins or CDDs may be formed during the chlorine bleaching process at pulp and paper mills, especially the most toxic form2,3,7,8- TCDD. According to the Centers for Disease Control, most dioxins attach to soil and settle to the bottom sediment in water, where they build up in the food chain. Eating food contaminated with dioxin accounts for 90% of the intake of CDDs in humans.

hormonal changes. In addition, the U.S. Department of Health and Human Services and the

World Health Organization have determined that 2,3,7,8-TCDD is a human carcinogen.Ryan filed a lawsuit in December 2011 against Defendants International Paper Company, Waste Management, Inc., Waste Management of Texas, Inc. and McGinnes Industrial Maintenance Corporation (MIMC) for allowing these toxins into the San Jacinto River. An amended suit filed August 15, 2012, sheds new light on the causes of the public health threat emanating from the Site and identifies new evidence detailing the Defendants actions, inactions and silence that have led to decades of dioxin exposure to the public and at every level of the food chain.

As Ryans Office has discovered, the presence of dioxin in the San Jacinto River and community was no accident. Documents have revealed that the abandonment of the deteriorating and leaking dioxin waste pits was actually planned, purposeful and intentional. Disturbingly, internal documents of Defendants MIMC and Waste Management of Texas show that the company in control of the San Jacinto Waste Pits intentionally voted to abandon their pits full of dioxin waste, while company executives voted at the same time to reward themselves with huge bonuses.

The people of Harris County do not think it is acceptable for the companies responsible for the dioxin to reward themselves financially for their misdeeds, devise and execute a plan to wash their hands of their pollution, and allow it to wash instead into Harris Countys waterways to become the responsibility of the taxpayers and a danger to the community, Ryan said.

Defendants placed their waste on the shores of the San Jacinto River, left it there, did not tell anyone that they were going to abandon it, and then took the position that they have no responsibility to the citizens of Harris County for polluting the river and that there is nothing harmful about eating dioxin, Ryan continued. Thats not right and we are doing something about it.

The Countys suit seeks monetary penalties against Defendants under state civil law statutes to reimburse the County for the taxpayer dollars spent addressing Defendants toxic wastes  including the dioxin known as 2,3,7,8-TCDD  a type of dioxin widely regarded as the most toxic chemical ever made by man. Penalties recovered will be shared with the TCEQ, with portions being earmarked to provide resources for the citizens of Harris County to learn about and respond to the dioxin in their river, among other programs. Harris County is represented by Vince Ryan, Harris County Attorney, Terry ORourke, and Rock Owens of the Office of the Harris County Attorney, and the law firm of Connelly · Baker · Wotring LLP.