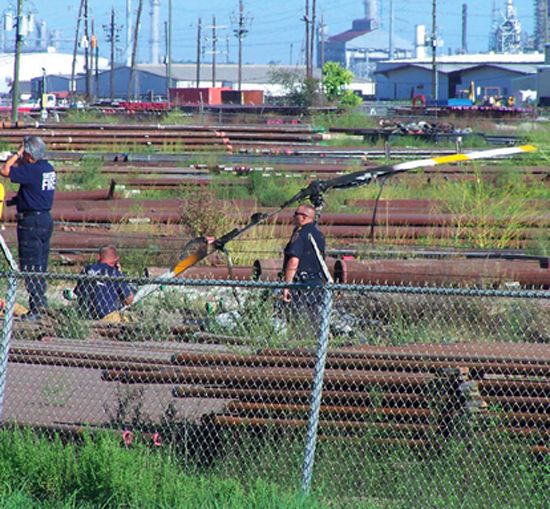 EAST HOUSTON  Rescue efforts by local men at about 3:40 p.m. on Monday were unable to save the lives of two people in a helicopter that crashed in the industrial pipeyard cornering Miller Road #3 and the Crosby Freeway.

State Troopers indicate it was a Robinson R-22 Helicopter with a man and woman on board. Witnesses say they saw it begin to tailspin horizontally then fall straight down and hit the ground inside the fence a few feet from the U.S. 90 access road on the afternoon of Sept. 10.

The victims have been identified by the Department of Public Safety as Christopher John Yeager, 40, the pilot of Houston and Joyce Ann Ates, 60, a photographer from Midwest City, Oklahoma.

According to Jerrod Danaher, I saw the helicopter start spinning and falling. I drove to try and get to where it looked like it was coming down. It hit about the time I pulled up. It looked like there were two people inside I could see their hands move and believe they were alive. I was running and it took some time to get past the fence, when it burst into flames. You could see the people in it wearing harnesses and moving their hands. It looked like two men to me but someone said it was a man and a woman. A group of about three of us tried to get to them but the flames kept us back.

Danaher said he had just left work when he saw the helicopter descent and explained he took the risk because, Id like to think that anyone would try to help in a situation like that.

The National Transportation and Safety Board (NTSB) examined the scene and the location was secured by State Law Enforcement troopers including Highway Patrol and the Harris County Sheriffs Department was present.

The Department of Public Safety indicates the craft had refuelled in Baytown about 1:30 p.m. The Federal Aviation Administration has joined the investigation.