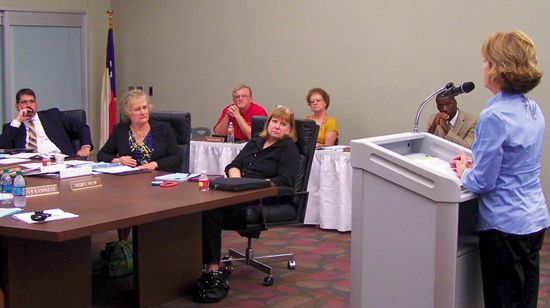 CROSBY  In two closed door meetings last Monday night, that lasted from 6:45 until 11:00 p.m. there was talk by Crosby ISD Board of Trustees of forming a committee to look at the needs of the school district and determine, as the Board has, that there is a need for a new high school that is to cost about $75 M.

The board discussed the parameters for a potential building program and getting together a Citizens Advisory Committee to begin the process of reviewing where the district is and how many students the district needs to prepare for to meet future needs.

It depends on how you look at the bucket, Superintendent Keith Moore answered Trustee Jo-Anne Crawford asking why we need a new school, Right now the bucket is full, if you can tell me it isnt going to rain again – then we dont need it. But if it rains again we have no more room to hold the rain in this bucket.

It was a night in which there was public and closed session deliberation about real property and the board hired Fred and Jarrod Fargo, appraisers with over 50 years experience, to represent the district investigating land for acquisition. Then they brought the pair into closed session to discuss something about property.

There will be elections conjoint with Harris County for Crosby ISD School Board of Trustees on November 6. Also of note, of the candidates to be on the Crosby ISD Board of Trustees, only board of trustee members attended the meeting. No candidate showed up for the meeting that was not already on the board with one meeting left before the election.

Discussion lasted several minutes on how to replace the 30 year old high school that was renovated first in 2004 to add 28,500 square feet for science and extra class size on the East side plus 9,653 square feet of library for about $10M.

Also not discussed was that 30 years is very old for a Texas high school building but 100 years is not old at all for schools in America that send up to 80% of their high school graduates to Ivy League Universities. Perchance the building isnt teaching.

Jerry Bevill of CRE8 architects advised the board that if anyone decided that a new Middle School was the way to go then the extant high school would still need a number of changes as well. The board asked how much taxes would have to go up if a new $75M. high school was built and a review to determine that amount would have to be done by the Superintendents office. One off the cuff estimate was 12¢ per $100 valuation.

The board approved another Pre-School Program for Children with Disabilities at the kindergarten. A Special Education Lifeskills Unit was approved for Crosby Middle School was approved.

All of these discussions were atop the on-going dispute with JoAnne Crawford over the budget. There seems to be an ongoing argument between most of the board that sees the budget as a framework for expenditures to be managed and a requirement that all matters be resolved for expenditures in advance. Wherein the public discovered that $60,000 per year goes to Goose Creek Consolidated ISD to collect Crosby Taxes instead of the Crosby Tax Office at about $140,000.

The resolution approving the 2012 Crosby ISD Property Tax Roll passed 5-1 with JoAnne Crawford the negative. The approval of a resolution adopting an ordinance fixing and levying school district ad valorem taxes for the fiscal year 2112-2013 was voted 5-1 with Crawford being the only negative again. All foreclosures were approved unanimously.

Mr. Davis was called to the podium to testify about the state of student to teacher ratio which is now about 20 to one for most of the school but 25 to one for much of the fifth grade. The board devoted some time to discussing how to equalize classes for both Drew Intermediate and Crosby Elementary School.

Assistant Superintendent Patricia Kay addressed the board concerning all matters of Curriculum including Handwriting/Cursive taught in the 3rd through 6th grade unless the student opts for manuscript in the 4th grade. Much ado about Summer School, seriously about 1:45 hours, teachers were very proud of accomplishments of the 180 students in the Pre-K through 6th grade and the 206 that attended for the 7th through 12th grade.

There was a detailed explanation of B.Y.O.B. (Bring your own books) and the Netbooks program for much of the middle school.

END_OF_DOCUMENT_TOKEN_TO_BE_REPLACED 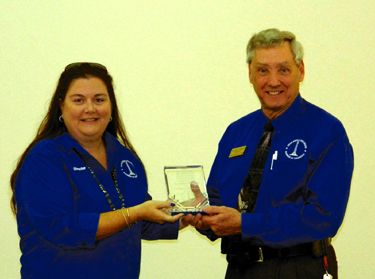 HIGHLANDS  The Chamber of Commerce held their annual Community Awards luncheon last Thursday, noting service by public servants to the good of the community.

The top award went to Pastor Phillip Morris for his service to the community. In making the presentation, last years winner Jessica Woods noted Morris service as pastor of Restoration House Church, chair of the Highlands Ministerial association, president of the chamber for two years, counselor and teacher in family matters, and other avenues of service. Morris accepted with a humble talk about his life, and how his faith had helped him overcome many problems in his early life. He also credited his wives and church members. The Chamber also awarded firefighter, constable, sheriffs deputy, and business awards.