CROSBY  A father and son died in a crash of an ultralight experiemental aircraft on the afternoon of Oct. 28 flying from Dunham Airfield to RJW Airport in Beach City.

According to local sources the plane took off at about 4:30 p.m. Aboard were Alan Gregory Vossler, 52, and his son Michael Alan Vossler, 20. It was a newly painted experimental ultralight Hornet. Alan Vossler is known as one of our Baytown buddies to many in the Crosby area. Vossler has been one of the key pilots for the Texas Equusearch Rescue for the last 6 years and founded Powerlines Solutions in Baytown. He is the father of five children.

According to Department of Public Safety Public Information Officer Richard Standifer emergency crews from Mont Belvieu, Department of Public Safety Troopers and Federal Avaition Administration were alerted by radio signals at 16:45 24 hour that Sunday that a sudden impact had taken place. The craft was found to have caught fire shortly after hitting the ground. Witnesses say the single engine propellor in reverse fixed wing aircraft had been seen flying low over treetops in the vicinity. The crash site proved to be near FM 1942 out in the 14,900 block of Hatcherville Rd. some 20 feet south of Liberty County line within Chambers County.

The National Transportation Safety Board was called to investigate the crash according to F.A.A. spokesman Tony Molinaro after it was determined that there were two fatalities.

END_OF_DOCUMENT_TOKEN_TO_BE_REPLACED 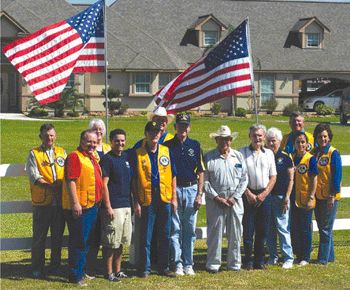 Barbers Hill Lions Club volunteers have place over 200 flags at neighbors yards on patriotic holidays; and this November 11, flags will be erected again to celebrate Veterans Day.

 Supporting children with disabilities to attend the Texas Lions Camp

The Barbers Hill Lions volunteers set up the flags before these patriotic holidays, remove them afterward, and store them all year for residents for $35.00 per flag per year.

END_OF_DOCUMENT_TOKEN_TO_BE_REPLACED

Mayor of Baytown speaks on growth 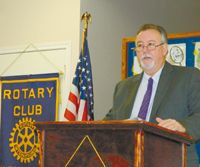 Mayor Stephen DonCarlos of Baytown spoke recently to the Rotary Club of Highlands, reviewing the upcoming economic development plans for the city, and other projects.

DonCarlos has been mayor of Baytown since his election in 2006, and has seen growth in population and the economy. But he says that plans for future projects promise much more.

The XL pipeline, and the shale oil it will bring from Canada, will drive the need for expansion projects at the four major refineries in Baytown, ExxonMobil, ChevonPhillips, Enterpise, and Bayer. What is unusual about the construction plans of these industries, he said, is that their growth will be simultaneous. He forsees that in the next 3 to 4 years, Baytown will need 22,000 construction workers, and will eventually have 1500-1700 permanent jobs related to this expansion. The need for housing will burgeon, and include Highlands as well as surrounding cities. Lee College is busy preparing new courses for these workers, he said. These jobs will be well paying, as much as $70,000 or more per year.

Related to this, Enterprise has purchased 2200 acres for expansion, and Chevron plans major expansion at Sjolander and I-10, with new buildings and roads.

END_OF_DOCUMENT_TOKEN_TO_BE_REPLACED

Elections range from school boards to president this Nov. 6th

Early Voting ends this Friday, Nov. 2nd at 7 p.m., and then regular voting will take place next Tuesday, Nov. 6th from 7 a.m. to 7 p.m. Voters in East Harris County will have some interesting choices at the ballot box, with school board elections in Huffman and Crosby, and 19 charter propositions in Baytown.

In Huffman, Position 4 Dean Tinnin and Position 5 Charles Bardwell and Position 6 Matt Dutton have no opposition, but Position 7 has Patrick Keith running against Guy Smith.

Another local race that has gained attention is the Pct. 3 constable race, with Republican Challenger David Cruzan, a sheriffs deputy, attempting to unseat Democrat Ken Jones, who has been the constable for 12 years.

For Texas Railroad Commissioner, unexpired term, Barry Smitherman is running against two opponents. Smitherman was originally from Highlands prior to his family moving.

Baytown residents will be asked to vote on 19 propositions that are basically meant to update their city charter in language and law.

Harris County Clerk Stan Stanart has reported very heavy activity in Early Voting, and with a full slate the electorate can expect some lines and delays next Tuesday, Election Day.

END_OF_DOCUMENT_TOKEN_TO_BE_REPLACED

Sampson Lodge thanks those who supported the Shriner’s Hospitals

To the Citizens of Highlands and Crosby,

We would like to convey the appreciation from the Sampson Masonic Lodge to the Citizens of Highlands and Crosby, for their recent donations to the Shriner’s Hospitals when we collected funds from drivers.

All of these funds go to help support the Shriners Children’s Hospitals in Galveston and Houston.

Again, thank you to all who contributed to the support of these charitable hospitals.

END_OF_DOCUMENT_TOKEN_TO_BE_REPLACED

In support of school board candidate

To the residents of Crosby School District,

November 6, 2012, is election day for everything, from President of the United States to your local school board members.

Whomever you choose to vote for is your choice. But I would like to encourage residents of District 7 of the Crosby School District to vote for James Hofmann. He is a very concerned parent who has 3 children in our school system. His fourth graduated last spring from CHS and now attends Texas A&M. His wife is one of our fourth grade teachers. So you see how his interest is in making sure our students have a great aducation.

I also feel that board members who have children attending school make the best trustees.