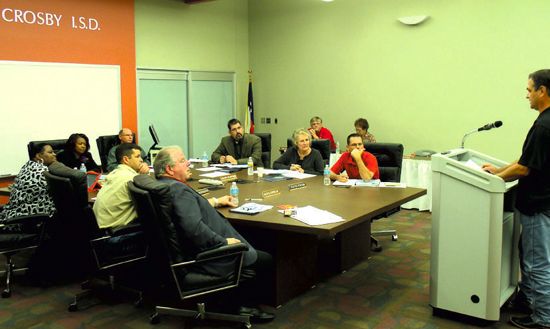 One of the greatest accomplishments a school board can make came into being last year when the board refinanced part of their last bond and saved 26%, now they have moved to refinance the rest of the outstanding sinking debt to (depending on how the market swings) save about $3 Million for the district. The bond refunding plan (begun by JoAnn Crawford) passed 7 to 0. It adopted an order authorizing the issuance of refunding bonds, establishing parameters for the refunding and delegating authority to the Superintendant.

The board promptly moved to begin consideration of buying 70 acres of land out of a 264 acre tract in the Humphrey Jackson League on the West side of FM 2100. They also approved related items. An expression, fixing to get ready, applies here  they did not approve buying the land, but to being looking at buying the land. They cleared the process to put a contract on the land to be purchased and due diligence will begin to examine the land soon. This began the 90 day opt out period. A company was hired by the board to examine land purchases. This land is being contracted to possibly be aquired for the districts future needs no matter what decision will be made about a high school bond or other decisions.

A finance expert discussed with the board the implications for proceeding with the bond now when interest rates are at their historic lowest. His report detailed the fiscal stability of the district to move to borrow the money at current rates and the historic stability and efficiency of the Crosby district related to funding schools.

The market was currently called The Bond Buyers Index is now extraordinary favorable.

The refinancing at a record low for the district will bring the district into a new low rate of 1.6% The district is currently at a financially strong position at the standard of having a ratio of tax base over student population because currently the district enjoys a 20% financing by the State of Texas.

The board accepted donations from various entities to finance school activities and goals. The Delta Sigma sorority donated $3500 to the district to help students with special needs. Wal-Mart donated $50 gift cards to twenty different classrooms to be used for educational supplies. A 1924 Cornerstone discovered inside a warehouse of the district was devaluated of resale capability and will donated to the Crosby Historical Society for the commemoration of a building that has served as a high school and middle school.

Again related to fixing to get ready the board allowed for possible re-imbursement of the general fund for capital outlay occurring prior to potential future bond financings. They are getting ready to spend money, if they borrow it to build something.

As the Citizens Advisory Committee continues to weigh options for the district and tour the schools to view potential needs and opportunities the historic slow rate of growth for the district may come upon changes related to development in the next few years. The questions of how much new development and how soon will make the district that is currently in a comfortable but tight student to classroom size to a potential situation in which there are too many students for the schools to house.

Dr. Hofmann on his debut on the board indicated that when he was on the Citizens Advisory Board the board took their suggestions and went a totally different way. 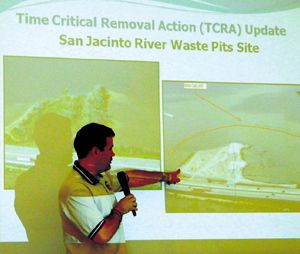 HIGHLANDS  Last Thursday evening, Nov. 15 the federal Environmental Protection Agency held the sixth in a series of Community meetings to update residents of the area on the status of the San Jacinto River Waste Pits, and to answer questions in this regard. The meeting was held at the Community Center, and although scheduled for 6:30 to 8:00, it actually ran longer because of interest from the audience to seek answers.

A presentation or status report was made by EPA coordinator Valmichael Leos, and meeting facilitator Donn Walters.

Leos reported that after a heavy rain in July 2012, and resulting high water in the river, some erosion of the containment cap on the west edge of the site had been discovered. The PRP (Potential Responsible Party) had been notified, and repairs were completed by August. An inspection of the cap indicated that there were no tears in the fabric over the waste pits, and no evidence of leaching or release of the dioxins underneath.

In addition to the EPA staff, there were representatives of the state health department present at the meeting. Michael Tennant made a presentation of testing for toxins in the vicinity of the pits, and the results that were incorporated in a report. 63 fish and crabs were caught and tested in 2010, 2011, and october 2012, and showed continued amounts of dioxins and PCBs.

Also present from the DSHS (Department of State Health Services) of the state of Texas was Dr. Richard Beauchamp, who had just completed a report entitled Public Health Assessment which took a large amount of data and analyzed it in regard to potential health risks from the toxins in the waste pits. Beauchamp was careful to explain that the assessment only studied effects of contaminants in the waste pits and the immediate earth and water adjacent to the site. Due to the unlikeliness that dioxins would travel through air or water tables, there was no evaluation of health effects in neighboring communities, based on the assumption that the dioxins in the waste pits would have no effect on these areas. He said that a health assessment of Highlands, Lynchburg or other communities could be made, but was not called for in this study. His Final Release of this Public Health Assessment will be used in the next steps of the EPA study, it was explained. Beauchamp studeied and reported on three basic scenarios that would threaten the public health. These were: one, direct ingestion in the mouth from transfer from a persons hands; two, dermal contact with a persons skin; and three, ingestion of fish or crabs from the river. His study indicated that long term exposure to these might cause cancers or other health risks. However, the report said that no adverse risks would be present from ground water, surface water, or air exposure from dioxins in the waste pits. It said that it could not judge effects of any off-site sand or sediment migration, due to lack of data.

The timeline was explained by EPA calls for a Remedial Investigation report by Feb. 2013, a Feasibility Study by Sep. 2013, public comment period in Oct. 2013, and a Record of Decision early in 2014, which will select the final remedy for the waste pits and the entire site.

It is expected that once these steps have been taken, dioxins and other hazardous materials would be removed from the site according to standard EPA protocol.

During the meeting, the cap or TRCA (Time Critical Removal Action) was discussed it length. It was admitted that the solution had to be temporary, that the life of the cap would only be 7 to 10 years at best. Because of the damage on the west edge, a re-assessment of the design and installation is being asked for from the Corps of Engineers. Questions to be studied will include whether the design took into account barge traffic on the river, and subsidence that continues. This report is due by the end of November (draft) and a final report by March 2013.

It was also reported that an inspection of the site on the south side of I-10, known now as the Southern Impoundment, has revealed that it is a separate dump from the Northern Impoundment site. A Risk Assessment for this site is due in several weeks, according to EPAs Gary Miller. Investigation so far has found that hydrocarbons (oil, enzene, etc) are present, and these are not from a paper mill, he said. However, the history of dumping and ownership of the site are still being investigated.

Concern over Health of Residents in Highlands

Members of the audience were given a chance to ask questions of the EPA and DSHS.

One concern voiced by several persons, including resident Pamela Bonta, was the high incidence of cancer related deaths in Highlands, and the possibility of a contaminated groundwater source affecting homes on well systems. She cited the poor health of 9 out of 12 of her neighbors, and her husband, too. She indicated that tests of their well water had indicated presence of heavy metals beyond acceptable levels. Dr. Beauchamp of DSHS said that there was no possibility dioxins or other contaminants in the waste pits travelling that far, and there was no relationship to their illnesses.

Concern over Lack of Action

One member of the audience expressed a frustration over the abundance of studies, and the lack of immediate action to remove the contaminants in the waste pits. Just dig the stuff up and haul it away he said. Dr Beauchamp explained that the study is required, in detail, to be sure of what toxins are involved, and how extensive they are. Then, a logistics problem has to be solved. You just cant move your problem somewhere else, he said. There are rules and concerns about where and how you dispose of toxic wastes.

Michael Ruger, of TexansTogether, an advocacy that has been following the waste pits problem, stated that too many people are sick, and dying in Highlands, and Why? We need to know. An epidimiology study is necessary.

Lisa Gosset, a University of Houston health professor, attending with some of her students, said that there seemed to be a Broad Health Based problem in Highlands and that what was needed was a comprehensive study approach, not just the waste pits.

Sarah Davis wondered where this help would come from. She said that the Harris County Health Department had indicated that there were many pollution sources in the Highlands area.

The Public Health Assessment by TX DSHS was made under contract to ATSDR, or Agency for Toxic Substances and Disease Registry, a federal agency that is part of the U. S. Department of Health and Human Services, headquartered in Atlanta, GA.

Most of the current reports are available for viewing at Stratford Branch Library in Highlands. They are also on the EPA website, at http://www.epa.gov/region6/6sf/texas/san_jacinto/.