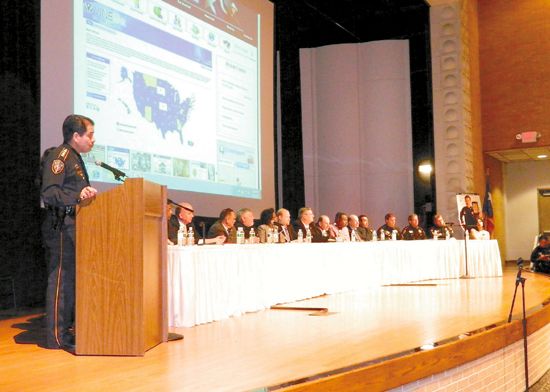 EAST HARRIS COUNTY  Sheriff Adrian Garcia called an all-county meeting last Thursday night, Jan. 24 to tell the public what his department is doing to provide enhanced school safety, to allow school districts to explain their safety procedures, and to hear comments and answer questions from parents and the public.

The meeting was held in the new Grant Fine Arts Center of San Jacinto Community College North. It was attended by several hundred interested parties, parents and the public.

In his opening welcome remarks, Sheriff Garcia said that this forum had originally been planned after the Newtown, Connecticut shooting at the elementary school, but that it was even more relevant because of the shooting at Lone Star College only two days before. He said the forum would attempt to answer the question for everyone, what are we doing to keep our children safe? What more can we do?

Sgt. Jimmy Cook, HCSO, showed the audience a training video used in many school and office jurisdictions, preparing people for a correct response when there is an active shooter. The message of the video was, take three steps: Run or Hide or Fight, depending upon the circumstances.

Dr. Steve Head, president of Lone Star College, updated the audience on the events of the shooting on his campus on Tuesday, and the subsequent arrests of two perpetrators.

Sheriff Garcia praised the response of his officers and other law enforcement. He said that within a few minutes, 150 of his deputies responded, and another 50 officers from other jurisdictions also arrived.

Next, several officers in charge of divisions of the Sheriffs office spoke on their responsibilities. Capt. Cordova heads the SWAT team or High Risk Unit, with deputies on call 24 hours. Christina Garza heads the information division, and spoke about methods of reaching the public and the media, with social media, webpage, and the website hcso.hctx.net, as well as traditional email for press releases. Sgt. Franks and the Sheriff urged the public to use the website: www.iwatchharriscounty.com for tips that report criminal activity. Sheriff Garcia said this has been very effective, with over 2 dozen behind bars from these tips. Lt. Robert Henry spoke about the development of the Mental Health unit, a necessary corollary to arrest and incarceration.

The public wanted to know what they could do to help school safety. A representative of the Houston Ministers Against Crime said they walk the halls of schools in Channelview, with a calming effect. Dr. Head agreed that a similar situation occurs in their campus at Victory Center. Pastor Gilmore said we need to bring God back into school.

Constable Ken Jones explained how his department contracts with 6 school districts to provide officers in the schools as needed, in 33 schools. These officers get special training every year, paid for by the districts, for gangs, first responders, and updating on basic policing.

Chief Clements of Galena Park ISD said they have used campus based officers since 1996, and they make a positive relationship with students. Drills are conducted on a regular basis. Some of the problems officers deal with are drugs, assaults, and counterfeiting.

Houston ISDs Sidney Zullinger said that Safe School are a marketing necessity, that parents want to send their children to a safe environment. He has 200 officers, and 261 schools. Every high school has a certified police officer.

Zullinger and most of the panelists spoke on the issue of guns for school personnel. The concensus was that armed police officers are okay in the schools, but not armed teachers. Dr. Head said that in a chaotic scene after a shooting, you cannot be sure who is a good guy after gunfire, if everyone has a gun.

When asked by an audience member whether more deputies are needed, Constable Jones related his experiences in Highlands, where they concentrate officers in high crime areas, and partner with the Sheriff on Task Forces for special situations. He noted that the County budget would allow him to hire 3 new officers this year, paid for by the three precincts his district covers. These comments were in general, not necessarily related to schools, he said.

Sheriff Garcia said that most schools are conducting Safety audits in cooperation with the Harris County Department of Education. He said that Harris County had authorized his office to hire more officers this year.

In closing, Garcia urged citizens to participate in the CPA or Citizens Police Academy to learn more about his department and crime fighting. He said that School Safety should be looked at as a County-wide strategy, not individual districts.

END_OF_DOCUMENT_TOKEN_TO_BE_REPLACED

The Galveston Bay Foundation (founded in 1987) hosted a public meeting last Thursday night at the J.D. Walker Community Center, to provide more information on the sites concerning how cleanup is going and what the future could hold.

The pits are located on the west bank of the San Jacinto River immediately upstream of the I-10 Bridge in Harris County. An additional pit, currently under investigation, is located south of I-10.

The U.S. Environmental Protection Agency (EPA) is overseeing the cleanup of the pits, which received wastes from the Champion Paper mill in the 1960s. These wastes contain dioxins, which are toxic and can cause increased risk of cancer and other threats to human health such as liver damage and birth defects.

Startling revelations involve the bio-containment cap, (that this reporter was told would not erode at a meeting in Highlands last Summer) has eroded and must be replaced in certain locations. Tuesday, crews were probing the armored cap to determine where leaks have been found. The caps were designed to hold contaminants up to the 200 year flood level and yet has in two locations already eroded, never having attained the 200 year flood level.

Both Sarah Davis and Jim Strouhal of the San Jacinto River Coalition attended the meeting and determined slightly different perspectives.

Davis learned there are 5 active Superfund Sites in Houston where construction does not comply, but felt there was little new and they still await the completion of additional studies.

Studies concerning the wildlife and migration of contamination have not been released but have been conducted. The new studies that should determine how extensive damage is to the environment, what the disposition of the sites are and therefore what is to be done about the sites is due out in March.

From this process feasibility studies will be conducted about what can be done to remediate the situations. The feasibility process is expected this Fall. Recommendation of a clean-up remedy by responsible parties is expected about December of this year.

Jim Strouhal found reason for hope in the broadening of allies and expertise on the subject.

I feel like Scott Jones and Bob Stokes have been closely associated and allied with trying to communicate with the public concerning the Superfund Site including the entire Galveston Bay Watershed. said Strouhal.

Linda Broach of the Texas Commission on Environmental Quality has been studying the dioxins in sediment extensively throughout the greater Bay area to determine where they originate.

Some of the public still lean on the signs warning of biohazards from eating fish and crabs from the locations not to fish.

Attendants learned that there are other concerns in the associated waters. One example is that PCB contamination is found from the Bridge of U.S. 90 all the way to the Trinity Bay and out as far as Galveston.

PCBs have been a concern since 2001, consumption advisories have been issued but unless you are paying attention, you are not hearing about those. Strouhal answered.

The Galveston Bay Foundation received a grant from the EPA to hire scientists from the Houston Advanced Research Center (HARC) to serve as the independent technical advisors and review site cleanup process reports, provide expert input and communicate their findings to the public.

END_OF_DOCUMENT_TOKEN_TO_BE_REPLACED

Hawthorne Crosby Firefighter of the Year 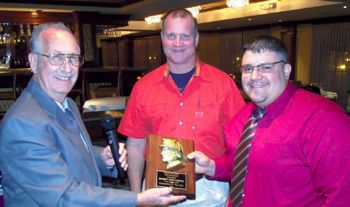 Within 2012, the local firefighters ran 837 calls for service of those building fire accounted for 92 calls, 36 of those calls were inside the Crosby District. A total of 129 of the calls were for motor vehicle accidents. The department is recovering from their most active year on record in 2011 where there were 964 calls. That year they were called out of district to deal with wildfires in distant counties.

According to Chief Alan Kulak, There were no injuries to speak of last year, our number one goal is to stay safe.

There were several 10 year recognitions this year Chris Reed, Jacque Barbonne, J.D. Giles and Mike Sims were presented with the awards. Chief Kulak was presented an award for over 30 years of service that was a firemans helmet in bronze. Shawn Robinson and James Brown were awarded recognition for 15 years of service.