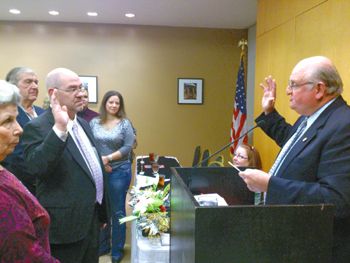 MONT BELVIEU  Eagle Pointe was the site for an installation banquet for the board and officers of the Highlands-Lynchburg Chamber of Commerce. The event took place last Friday night, Feb. 8.

Jessica Woods was the master of ceremonies, as the new president Jim Wadzinski took office and gave a talk about his goals for the coming year. Jessica thanked outgoing president Phillip Morris for his two years of service, and presented him with a plaque. Morris also was last years Terry Davis Award winner, she noted. ZXP Technologies was the 2012 Business of the Year, and that award was given to George Browning of the company.

Wadzinski then gave a speech about goals and activities for the coming year. The talk varied from personal commitment, to call for community involvement and support.

Wadzinski pointed out that the greater Baytown area, including Highlands, will experience the effects of huge growth in the refinery industry in the next few years. 22,000 construction jobs, and 3500 permanent refinery and support jobs are promised by Baytown refineries in the next 2 to 5 years. Wadzinski wants to make sure that the Highlands Chamber gets its fair share of this growth, he said.

Highlands will change, and the Chamber must grow. He noted that in the last 11 years, since he became involved in the chamber, membership has gone from 23 to 103. He projects continued growth. His goal is a 25% increase in members in the next two years.

Wadzinski also thought that the Chamber should sponsor a golf tournament, which could raise major funds for projects such as scholarships and a building fund. His goal was to raise $20,000 and use some of those funds for two major $5000 scholarships for Highlands students.

Wadzinski wanted more effective communication with local government and industry for mutual benefit. He announced that Chevron Phillips had joined the chamber, as a start.

Wadzinski said he is looking for help from each member of the chamber to achieve these goals. He quoted Peter Drucker, The best way to pre;dict your future is to create it.

END_OF_DOCUMENT_TOKEN_TO_BE_REPLACED 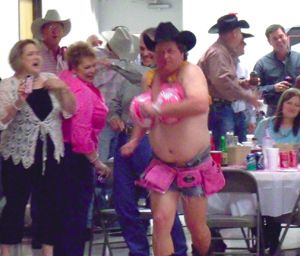 CROSBY  The Second Annual Bras for the Cause benefit held last Saturday was a stellar success raising about $38,000 before costs to combat breast cancer via the American Cancer Society.

The event was sponsored by the Tough Enough to Wear Pink Committee of the Crosby Fair and Rodeo in conjunction with and at the David H. McNerney American Legion Hut 658. All proceeds from this exciting event will to the American Cancer Society for breast cancer research and education. This event followed last years successful venture bring in $30,000 with all the proceeds going to the American Cancer Society.

No more poignant opening speaker could have matched Debbie Holmelin that knows first hand from having lost her husband to breast cancer the pain the disease can cause.

The Master of Ceremonies, Susie Garcia, announced a series of 22 local macho male models for bras designed by 19 artistic designers. Susie was taking the place of local television personality Don Nelson that was coping with rotor cup surgery. Susie is one of those regular Texas women that exude personality and her picture is next to the new dictionary definition of charisma. Garcias comments got laughs and audience participation in the fund-raising and was amplified by Chuck Richnows spinning out some coordinated music. The models strutted throughout the American Legion Taj Mahal displaying the designs and booting upward the take from tips by the ladies with a few surprises.

Following the display, auctioneer Bill Busby called for the top dollar from the crowd. He managed to get $5,000 for Royce Doskocils hard-hat cups becaue the man worked it. Doskocil was dubbed the Entertainer of the Evening partially due to bring in the most in tips  aided by a $100 bill slipped in his bra. Clay Stephens outfit by Jamie Fitzgerald, entitled Saddle Up for a Check Up not only raised $2,800 by Busbys auctioneering but then add ons brought it to $5,300 but then his father, Scott Stephens doubled the bids. Two more heroes of the night were Gary and Kim Smith that made sure that at least $1000 was given for each bra displayed.

After the Silent Auction winners were announced the ladies put on a boot scooting performance on the dance floor that brought down the lights.

Later, at Billys, the dancing and celebration of a great charity job well done continued.