Scott Stephens is Citizen of Year

DEER PARK  A gala Award Presentation at the Monument Inne highlighted a successful year for the Crosby-Huffman Chamber of Commerce that has lately launched new endeavors to keep pace with developments in the community.

Glenn Cole, Chairman of the Board gave an introduction and capped the event with comments about local infrastructure and curbing crime.

Dr. Keith Moore, Superintendent of Crosby ISD, introduced and presented Citizen of the Year to Scott Stephens. Stephens lost his son, Cody, to an enlarged heart last year. That loss lead him to the resolution that high school athletes should have an E.K.G. read by a cardiologist to identify symptoms in the cardiopulmonary functions of the body. Some school districts including Huffman ISD had already begun testing for those heart problems and now with the help of Stephens, Crosby ISD has launched a program backed by the Cody Stephens Go Big or Go Home Memorial Foundation, a 501(c) 3 charity. Stephens founded the Memorial at the Crosby Fair & Rodeo Livestock Auction last year.

Stephens has spoken several times to the Texas Legislature and the U.I.L Conference to prompt action on testing students for heart problems. His achievements include getting various school districts outside the local areas to begin testing including Lubbock. House Bill 1379 and Senate Bill 379 have been written but as yet not voted upon. The U.I.L. is reviewing but probably will not mandate the measure certainly this year as the medical infrastructure does not yet exist for the numbers that may be required. However, this year in the October Legislative Council a plan is can be approved such that athletes throughout the State of Texas will receive a letter to take home for their parents to review describing sudden heart arrest, the consequence of that failure and informing them of where they can get tested as locally as possible at a significantly reduced price. Effectively by Spring of 2014 parents can expect to see that form.

School districts throughout the state however, in light of Stephens speaking out on recent incidents, are beginning to take actions independently to begin the testing.

The first presentation of the night was to Chamber Second Vice President Kim Harris of KMCO for Employee of the Year by Justin League of United Community Credit Union, the man that took her place at that Credit Union last year. Harris has headed the Embassadors Committee and served on the board for several two year terms.

The David H. McNerney American Legion Post 658 was presented Non-Profit of the Year as presented by Board Vice President Macie Schubert of Community Resource Credit Union. The award was accepted by board member, Don Guillory on behalf of the Legion.

Volunteer of the Year was Don Guillory as presented by board Parliamentarian Bob Ward. The board recognized Guillory for his service from youth baseball to the American Legion and volunteer efforts for the Eastside Veterans Day Celebration.

Glenn Cole tapped a long standing member of the board and avid supporter for the Chairmans Award. Venita Smith admitted she had been involved with the Crosby-Huffman Chamber since she was 19 and joked that she was now 34. In a short and humble acceptance, Smith drew four crowd laughs and won the hearts of those that might not have the privilege of working with her. She has served KMCO Chemicals for 25 years.

Don Cox of Century 21 Life Changers lead the committee to put the banquet together.

END_OF_DOCUMENT_TOKEN_TO_BE_REPLACED 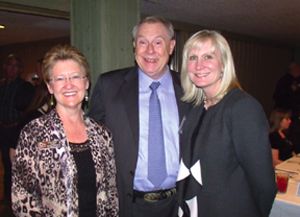 AUSTIN  State Rep. Wayne Smith (R-Highlands-Crosby) has filed House Bill 1127 aimed at cracking down on undercover Game Rooms in Harris County that have become a breeding ground for illegal activity and crime. Over the last ten years, game rooms have proliferated across much of incorporated Harris County due to increasing regulations under ordinance by the City of Houston.

To fly under the radar, many of these game rooms have changed their business model where restricted access has now become the norm, where game rooms only allow members or known referrals access behind darkly tinted windows and locked doors. This restricted access greatly inhibits even undercover investigations.

Undercover game rooms have become a breeding ground for illegal activity and crime, said Representative Smith. Its time to shine a light on this shady practice by giving the state and law enforcement regulatory authority to crack down on bad operators.

The cash rich businesses have become an increasing target of criminal activity. Since 2007, Harris County has seen ninety instances where robberies or aggravated assaults took place in game rooms in unincorporated areas. In that same time span, five homicides have also been attributed to these locations, including a pregnant woman who was killed when a worker at a game room discharged a shotgun while trying to stop a robbery. It is estimated that an additional twenty five percent of the crimes go unreported or reported away from the game room due to the refusal of game room operators to allow patrons to call police at their location.

Several years ago a crackdown by the Harris County Sheriffs Office and the Precinct 4 Constable on these locations resulted in large seizures of the coin-operated machines, often referred to as 8-liners, for failure to comply with tax laws. Eighty-five search warrants have been executed in game room investigations in the last five years. The enforcement actions resulted in the arrests of business operators for Promotion of Gambling as well as issuance of citations for failing to have current tax permits. These businesses operate under the pretense of providing entertainment only, but clearly continue to provide an unsafe environment.

I am proud to carry this bill on behalf of the families who have fallen victim to the illegal activity and crime, and the law enforcement agencies who need all the tools at their disposal to keep our citizens safe, said Smith.

House Bill 1127 seeks regulatory authority over Game Rooms to ensure they provide an environment safe for patrons and workers and are open to inspection by law enforcement and proper administrative authority.