CROSBY, (April 4, 2013)  The local school board is trying to keep pace with the an economy in transition as it voted unanimously to pass recommendations by the administration on March 25.

A 3% increase on midpoint salary for all employees has been approved for the 2013-2014 fiscal year. The measure passed 7 to 0.

The board voted to make external equity adjustment to current teacher salaries for next year.

The board approved stipend adjustments for next year.

The board voted to change policy to delegate the Superintendent the final authority to employ contractual employees for teaching positions.

The new employees recommended by the Superintendent were employed.

The depository contract with Community Bank of Texas was extended for a two year term beginning September of this year.

END_OF_DOCUMENT_TOKEN_TO_BE_REPLACED 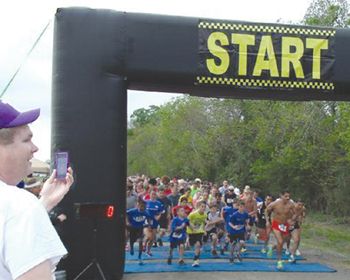 CROSBY  Jog for the Journey was packed with 325 participants and 20 sponsors last Saturday as the running group adopted the memorial foundation for Cody Stephens.

The Cody Stephens Go Big or Go Home Memorial Foundation in partnership with East Houston Regional Hospital has been dedicated to help get heart screenings for Texas students with results from Crosby students needing physicals for athletic endeavors receiving them free next year and free to those potential athletes from 7th grade to 9th grade the next year and new students moving into the district, also heart screenings offered to all students wanting them next year for just $15. But the results do not stop there, the efforts have reached all the way to House Bill 1319 Codys Bill in hearing next week in the Public Education Committee in the Texas House of Representatives. The House Bill 1319 has seven cosponsors. This week at the Awards Presentation inside Crosby High School, Scott Stephens received for the Foundation $450 raised by Crosby High School Cheerleaders for T-shirt sales and $1000 from P.A.C 10 A.M. to help fund the screenings over the next three years.