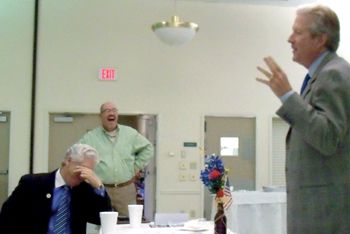 HIGHLANDS  Lee College is asking voters to approve a $40 million bond inside the Goose Creek Independent School District, plans were announced at the Highlands Chamber of Commerce luncheon last Thursday.

Dr. Dennis Brown, who became President of Lee College in February 2012, gave the facts about the bond.

The Lee College tax increase is to expand the simulation lab at the college, research the opening of a Health Clinic on campus, upgrade classrooms, laboratory facilities, create space for new Physical Therapy Program, Occupational Therapy Program and other allied health programs. Also included is an upgrade to Rundell Hall including a first floor one stop shop for student services, a second floor university center, testing center, administrative offices, and a business and conference center.

The cost of the bond for tax payers is a tax rate increase of $1.75. The homeowner with an appraised value of $100,000 is to pay $1.17 per month more property taxes. Future expansion of business and industry may take some of that burden away from taxpayers.

Senior Citizens will have no tax increase on the frozen level on the homestead of taxpayers who have applied for and received the age 65 freeze unless they have property values exceeding $93,750.

The Board of Regents reduced the 2012 tax rate by 1¢. The college has not had a bond referendum since 1999.

Election day for the Lee College Bond is May 11 with early voting beginning April 29 and lasting until May 7.

Precinct 3 Justice of the Peace Don Coffey gave a presentation of why the bond should be passed. He, his wife and his son graduated from Lee College. The modest bond passed in 1999 was a success and the college has been conservative on how the college has expanded. The McNair Center has been funded from grants and now is an industrial training area. After the bond it will become a medical training center. The focus of Lee College is workplace development and this is critical to development of business locally, with a goal of student success. The current tax rate is based on no growth in the tax base, while the Goose Creek Consolidated ISD tax base depends upon expected expansion in local petrochemical businesses within the district. If Lee College used the expected expansion model for projection, they would have no increase in the rate at all.

So we can borrow this $40 million at such a low rate that we can get a rate of $1.75 if there is no growth over the next 20 years. Our employees wanted $70 Million to do various things but we are very conservative. I feel certain it will come back in huge rewards. said Judge Coffey.

Highlands-Lynchburg Chamber President Jim Wadzinsky added that If we dont pass this bond this year it is going to cost twice as much next time it is offered.

END_OF_DOCUMENT_TOKEN_TO_BE_REPLACED

CROSBY  It is time to decide how much preparation the Crosby Independent School District needs in new buildings and facilities.

Early voting on the Crosby ISD bond begins April 29 and runs through election day May 11 except for Saturday and Sunday. The early voting will be at the administration building from April 29 through May 3, 706 Runneburg Road and election day at the same location for other locations and times see the Crosby ISD Bond Ad on Page 8 or call (281) 328-9200.

Friends of Crosby ISD P.A.C. committee chairman Scott Stephens says, This is a pivotal decision for Crosby. The time is right, interest rates are low and the need is obvious. Its time to embrace our future while respecting our past.

The Friends of Crosby ISD indicate that the Capital Facilities Program is estimated to cost $86.5 Million and if voters approve the tax rate increase, it will not exceed 23 cents per $100 valuation.

No tax increase is placed on the frozen level on the homestead of taxpayers 65 years of age and older who have applied for and received the age 65 freeze. That freeze does not apply to increased home values resulting from new improvements made after the effective date of the freeze.

A bond to build a new high school with new JROTC building, athletic field house, agriculture barn, tennis courts, fine arts facility, auditorium and District-wide Tech Center; convert the current high school to middle school, renovate the middle school into an elementary school, and make the Kindergarten Center into a Early Childhood/Pre-K, Kindergarten program combined with the current Crosby Elementary School, construct a new auto stacking drive at Newport Elementary School and renovate elementary school playgrounds and make district wide maintenance and repairs. That is Phase One of two phases, it is an increase of taxes for one year and to be used only for building and maintenance capital projects within the district.

The second phase would only come into effect when there is sufficient growth to provide the funding. The second phase is to construct a new competition baseball and softball fields, renovation of Cougar Stadium with increased parking, a new press box, new home seating (this time facing East) with restrooms and concession stands also a second phase of district wide repairs and maintenance.

If approved the Phase One planning, design and construction documents will require about 11 months dependent upon the project scope to be completed. Then the plans will be released for competitive bids and pricing for about six weeks. After finalizing proposed pricing, construction would begin about a month later.

Currently the State contributes to the Districts annual payments on bonds that are outstanding. State Assistance comes from two programs, the Existing Debt Allotment and the Instructional facilities Allotment.

Bond elections are presented to voters in the form of a ballot proposition to approve or deny the school district the ability to issue or sell an amount of bonds.

The grade re-alignment approved by Board of Trustees will go ahead regardless of the outcome of the bond referendum.