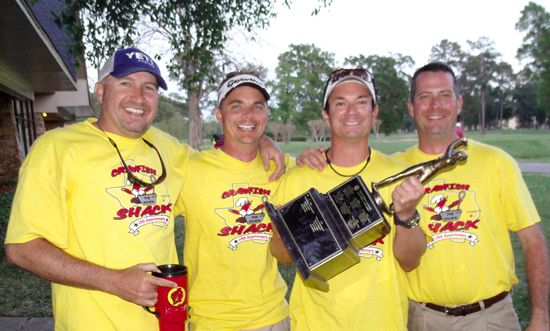 CROSBY  The Newport Golf Course and Convention Center hosted Tees and Tails the 49th Annual Fund-raiser for the Crosby-Huffman Chamber of Commerce.

The Tees aspect of the event was a golf tournament that featured much effort by the folks at United Community Credit Union for working the committee and set up of the event and ACE Sponsorship. The Crawfish Shak contributed cooking and thousands of Crawfish and shrimp for the Tails portion of the event.

Higginbotham & Associates were second place and were the much desired Beverage Cart, sponsors.Koby Hackradt, Ryan Moss, Jeff McFerrin and Will Baker made up the team. Third place in the evening went to Shine Dental featuring Albert Luna, Dihn Hoang, Brad Kirksey and Clay Kirksey

Luna also won longest drive. Closest to the Pin was Christy Henderson and Most Honest Team was Blisco.

Eddie Foster sang and played disc jockey for the event and the Lions Club dished up the fish.