AUSTIN/HIGHLANDS  Two bills have been introduced in the State House that could impede Harris County from employing private lawyers to help sue for pollution at the San Jacinto River Waste Pits.

The Waste Pit case is before the Texas First Court of Appeals. Attorneys for the two corporations have filed briefs challenging Harris Countys right to hire contingency fee lawyers in the San Jacinto Waste Pits case about dioxin-contaminated site along the San Jacinto River. The companies representatives argued the arrangements created a profit incentive and would therefore be unfair to their side because the prosecution would not be neutral.

The corporations being sued over polluting the Waste Pits here have contracted some high dollar attorneys to avoid the penalties Vince Ryan, Harris County Attorney would hit them with for the cleanup of the San Jacinto River.

Anytime you have Bracewell & Giuliani and the former Chief Justice of the Texas Supreme Court on the front row you have expensive representation. Harris County cant afford what they are spending on lawyers. Weve got contingent fee lawyers, says Terry ORourke, the countys special assistant.

Those corporations got some help in the Texas Legislature this week when Cindy Burkett, R., District 113, out of Garland, just East of Dallas, introduced HB 3119 and then there was HB 3117, that would restrict County Attorneys in pollution cases from hiring private attorneys on a contingency fee to benefit the prosecution of those cases.

When the Star-Courier contacted Burketts office in Austin we were disconnected then when we called back and waited, they did not respond by deadline to questions about what was her intent on filing the bill.

Harris County then has discerned that hiring a private law firm on a contingency fee basis is going to be beneficial in prosecuting the suit.

But that employment in the multi-billion dollar dioxin case would be outlawed in pollution lawsuits if the two bills were passed.

The House Committee on Environmental Regulation delayed consideration of HB 3119 by leaving it pending on April 16 and its companion bill 3117 has sat without any committee action.

The Texas Conservative Coalition Research Institute compiled a report on what it calls the dubious practice of employing private lawyers on a contingency basis.

The group argues contingency fee deals encourage private firms to enrich themselves at the expense of adequately funding the cleanup of toxic sites.

Ryans office points out that contingent fee contracts are reviewed and approved by the Texas Comptroller and are governed by state law that caps payments according to the amount of work performed.

Lawyers for the companies argued in court that the case could result in $2 billion to $3 billion in civil penalties with 25 percent going to the private lawyers, according to coverage of the hearing by Law360.

In 2003, a new law took effect (SB 1265) that now requires local environmental enforcers to first submit a potential criminal case to the Texas Commission on Environmental Quality (TCEQ.) The commission is then supposed to review the case and determine if criminal prosecution is warranted.

Harris County officials have said theyve had to make environmental enforcement a priority since the the county is home to an enormous petrochemical complex and (outside of the Alamo) the San Jacinto Memorial Park is the largest tourist attraction in the State, there the waste pits have made the San Jacinto Rivers fish inedible.

END_OF_DOCUMENT_TOKEN_TO_BE_REPLACED 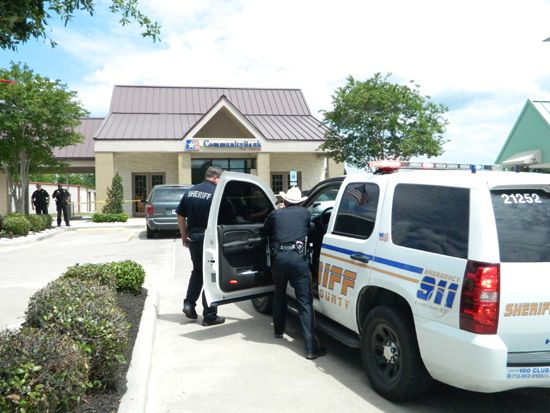 CROSBY  At 1:37 p.m. on Tuesday, local businessman David Ramirez was driving up to Crosbys CommunityBank, when he observed the beginning of an armed robbery, complete with a gun battle, escape, chase, and eventual capture of some of the perpetrators. He called 9-1-1 and within a few minutes Sheriffs deputies showed up on the scene, thwarting the heist.

The first robber entered the bank with a gun, disguised with a hoodie over his head. As the tellers handed over an undisclosed amount of cash, a silent alarm was tripped, and the Sheriffs office responded with a convoy of at least eight patrol cars speeding through Highlands toward Crosby.

In the meantime, a deputy driving past the bank observed the men in unusually heavy hot clothing, and sensed something was wrong. These two men had been observed in the parking lot across from the bank earlier in the morning, acting in an unusual way, according to witnesses.

As the deputy, B. L. Murray, pulled into the bank driveway, the robbers fired at him several times, and he returned fire. Although his vehicle was hit, no persons seemed to be wounded, the Sheriffs office said.

At this point, the suspected robbers ran toward the Friendly Ford car dealersip behind the bank. There they stole a black Ford F150 pickup truck that was being serviced, and had keys in it.

They exited from the dealership by driving down old US90, Beaumont Highway. Officers pursued the truck, and saw one occupant dropped off at an apartment complex, where he got into another vehicle. A state trooper who had received a description of that vehicle intercepted it, somewhere near John Ralston and US90. Two men were arrested, but the third man escaped.

Deputies believe that the man who escaped is the one who shot at the deputy at the bank. He is armed and dangerous, officers reminded the public.

Henry Giron, 21, is charged with Aggravated Assault and is being held at the Harris County Jail.

Investigators still are looking for the third suspect, only described as a black male in his mid to late 20’s, 5’6″ to 5’7″, with a thin build. The getaway car he stole from a nearby dealership was recovered shortly after the bank robbery. Charges against a third suspect are pending.

Anyone with information about the wanted suspect’s identity and/or location should contact Crime Stoppers of Houston at 713-222-TIPS, or the Sheriffs Office, 713-221-6000.