CROSBY  Precinct 2 Commissioner Jack Morman is making good on his promises to be the infrastructure commissioner for Northeast Harris County and on Tuesday he broke ground at Crosby Volunteer Fire Station #2 to begin the widening of South Diamondhead Boulevard.

First to speak at the groundbreaking was Alan Kulak, Fire Chief of the Crosby Volunteer Fire Dept. who welcomed the dignitaries and community to the fire station.

Early efforts will smooth the access to and from the fire station, then the widening will begin from there west.

In total the project cost to Harris County Precinct 2 is to be $1.9 million, according to engineer Jack Rodriquez, the engineering process went smoothly and the construction process alone was over $1.4 M of that $1.9M. Rodriquez pointed out that various overlay projects in the rest of Crosby have now been accomplished and that when given the choices of tackling the asphalt roads within the subdivision and widening South Diamondhead, the property owners association overwhelmingly chose widening the south entrance and exit to the subdivision.

Dennis Pilkington, President of the property owners association spoke next in praise of the Commissioner that he introduced as a promise keeper. He, (Commissioner Morman,) has done a tremendous job of transferring money from people to infrastructure. Because without infrastructure, as Ive been preaching to everybody that would listen in this community that would listen for 20 years, you are not going to have any growth. If you dont have any decent water, any sewer, better roads, or good school buildings you are going to end up with a low demographic population and then youve got no money to do anything.

Morman said, We are thrilled to be in the Crosby area, we did inherit this area through the redistricting process. Construction will start in July and will be finished in October. He thanked the property owners association and stated Without their cooperation they would not be able to be out here.

The design team after specifications were set by Precinct 2 was LandTech Consultants, Inc. with GEOTECH and Crouch Environmental Services, Inc. The construction team is Angel Brothers.

END_OF_DOCUMENT_TOKEN_TO_BE_REPLACED

800 students get their hearts checked in Crosby 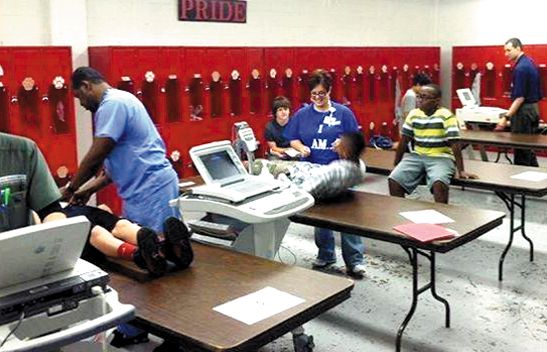 CROSBY  The efforts of a local community activist have helped the odds of survival of some local students.

Scott Stephens put together a foundation that is dedicated to promoting heart screenings across Texas after his son, Cody, died of sudden cardiac arrest in May 2012. The Cody Stephens Go Big or Go Home Foundation has found its way this week into Crosby High School. Eight hundred and one Crosby students were screened on June 3 by East Houston Regional Hospital.

The screenings found there is a potential for problems in about seven of the students.

According to physicians of East Houston Regional Hospital on Tuesday just before press time, We are in the process of finalizing the last of the screenings so I cant give you final numbers, however at this point 801 total screenings were done. Approximately 500 of these were normal. We have approximately 300 that are being finalized. Seven students will need to follow up with a doctor. We hope to be done with all of them by the end of this week.

Codys hometown got the message, a great turnout! Thanks to my friends at East Houston Regional Hospital for providing this service in a very cost effective and professional manner. said Stephens.

Sudden Cardiac arrest is the leading non-accidental death of student populations. About 2000 deaths per year in the U.S.A. occur for those under 25 years of age. By funding this simple, non-invasive ECG screenings many deaths of youths can be prevented.

Stephens also had success in Austin, Representative Sylvester Turner and Senator Tommy Williams, both who carried Codys Law were voted best legislators of the 2013 session.

Stephens asks you to support Codys Bill HB 1319 by informing your local State representative of your support. In Highlands and Crosby that is Wayne Smith and in Huffman Dan Huberty. For informatin and to make donations visit: www.codystephensfoundation.org.