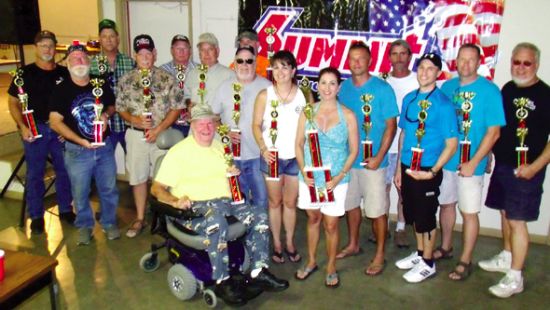 CROSBY  The Knights of Columbus Hall featured a bevy of friendly fishers of men, a lively, humored live auction, a lot filled with fantastic classic cars and barbecue on June 30 for the Klobassa Festival.

The chicken dinners were done to perfection and so was the sausage.

Anyone needing a friend had only to look around and if they were very particular – well, Bert Baker was outside parking late arriving cars.

The secret to a great Klobassa Festival is having lots of entertainment and Eddie Foster was on his feet at all times keeping the rest of us on our feet.

This year Classic Cars, Classic Trucks and even a few sexy Tractors were a serious feature as some of the greats in the state (most owned by locals) filled the 1508 Crosby-Dayton Road parking lot. It was a festival of Fifteens when 15 trophies were awarded for vehicles and 15 firearms were raffled. Numerous tickets to the raffle were sold at the Festival.

The Klobassa Festival takes its origin from the Czech heritage in Crosby from the 19th Century based on the type of sausage made by the Czech immigrants. It is a local cultural heritage event not to be missed for fun and great taste.

END_OF_DOCUMENT_TOKEN_TO_BE_REPLACED

NEW YORK  Moodys Investors Service on June 24 assigned an A1 rating to Crosby Independent School Districts $67,500,000 Unlimited Tax School Bonds, Series 2013. In addition to the underlying rating, they have assigned an Aaa enhanced rating to the Series 2013 bonds provided by a guarantee of the Texas Permanent School Fund (PSF). Proceeds from the Series 2013 sale will be used to fund the construction of a new high school.

Dr. Keith Moore sees the ratings as, There may be higher rated schools in the state than Crosby, but not very many,

Calling the bond a general obligation the sale has been moved to July 17 of Unlimited Tax School Building Bonds.

The bonds are secured by an unlimited ad valorem tax on all taxable property within the district. Assignment of the A1 rating reflects the districts elevated debt burden, moderately sized tax base, above average socio-economic profile, and improving financial reserves.

According to Dr. Moore, When we set the factors for the bond a lot of things come into play to determine the amount of money that be will raised. One factor is where our tax base is another is how many people are in the district. When we say we can raise $68 Million dollars that is true but it is based on assumptions such as what our tax base is going to be. We have based this bond on conservative assessments.

The Aaa enhanced rating reflects Moodys assessment of the Texas Permanent School Funds (PSF) ability to make payments on the guarantee relative to the substantial value of the fund corpus. Additional credit considerations include: the PSFs constitutionally protected corpus, the credit quality of the Texas school district G.O. debt guaranteed by the fund, an investment portfolio that provides satisfactory coverage and liquidity given our estimated probability of calls on the guarantee, and strong legal mechanics that facilitate timely reimbursement to the PSF should guarantee payments occur. For additional information on the PSF program, please see Moodys Ratings Update Report on the Texas Permanent School Fund dated September 24, 2012.

The districts strengths were listed as trend of operating surpluses and satisfactory financial reserves and more interestingly, anticipated tax base expansion based on preliminary values.

Challenges include elevated debt burden with slow payout.The rating could be improved if there is significant tax base increases coupled with reduction in debt burden. Another challenge would beif everyone moved out of Crosby or if there is some reason a deterioration of General Fund reserves, (no mo money.)

The Texas PSF rating was assigned based on Moodys assessment of the PSFs ability to make payments on the guarantee relative to the substantial value of the fund corpus. Additional credit factors relevant to the rating include: 1) constitutional protections for the corpus 2) strong state involvement in school districts and state aid intercept/school district takeover authority 3) coverage for potential calls on guarantee 4) size, concentration and correlation of guaranteed debt 5) issuers management and governance 6) investment portfolio and liquidity. These attributes were compared against other issuers both within and outside of Texas PSFs core peer group and Texas PSFs ratings are believed to be comparable to ratings assigned to other issuers of similar credit risk.

END_OF_DOCUMENT_TOKEN_TO_BE_REPLACED

Crosby 9U All Stars advance to Pony League World Series 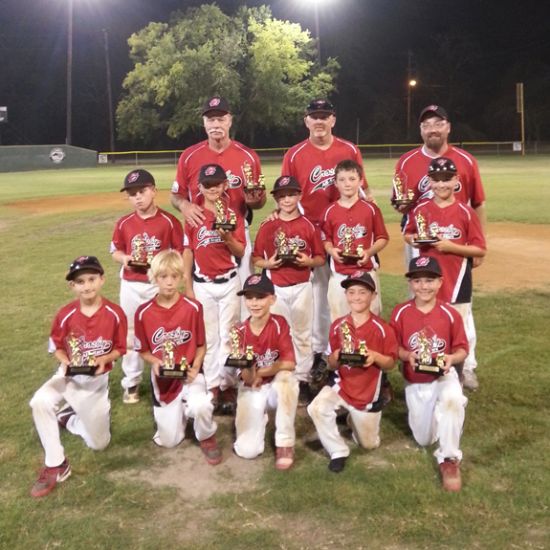 Crosby 9U All Stars advancing to the 9U Pony League World Series in North Richland Hills, TX. There first bracket game will be held Thursday July 11th at 4pm.

END_OF_DOCUMENT_TOKEN_TO_BE_REPLACED

The Crosby Girls 12U Softball All Stars were undefeated and swept the tournament and are bringing home a huge victory! The girls will be going on to the Pony League World Series July 23-27 in Burleson, Texas.