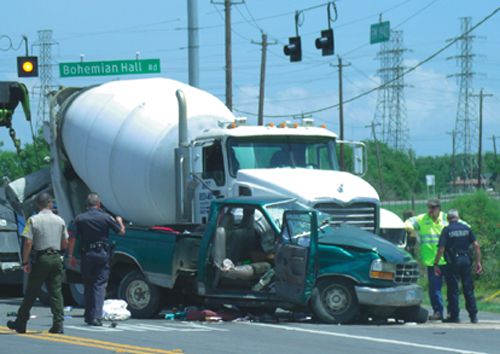 CROSBY  Another case of failure to yield right of way was fatal for a man and a dog, a young woman and another dog were critically injured at the intersection of FM 1942 and Bohemian Hall on Monday morning.

It was about 10:40 a.m. on August 6 when a southbound green older model F-150 on Bohemian Hall Road approached a stop sign that has lights and signs warning of the intersection directly between Crosby and the oil production fields for most of the world. At the same time a white cement truck was westbound on FM 1942.

According to Traffic Investigator Harris County Sheriffs Deputy L. Hernandez, The westbound driver approaching the Bohemian Hall intersection sees the green truck didnt stop, it just entered the roadway. He tried to brake and couldnt stop in time and struck the truck at the drivers side.

Raymond George Wike, Jr., is listed as the driver of the green vehicle according to Harris County Sheriffs Traffic Reports released Tuesday, the name of the woman has not been released. There were two young dogs, aboard the F-150, one died on impact and the other was taken to a local veterinarian by Harris County Emergency Service District #5, the ambulance service for Crosby. Jesus Sauceda, the driver of the white concrete mixer truck, was transported by HCESD#5 to a local hospital said to be shaken up and for minor injuries according to reports on Tuesday.

The Harris County traffic Enforcement Division is still examining this accident and an investigation continues.

Meanwhile the Keystone XL Pipeline battles hurdles to come to Mont Belvieu and the Port of Houston is on schedule to provide most of the U.S. export to the Panama Canal, the canal completes its expansion in 2014. FM 1942 connects Crosby to Baytown and Mont. Belvieu.

END_OF_DOCUMENT_TOKEN_TO_BE_REPLACED 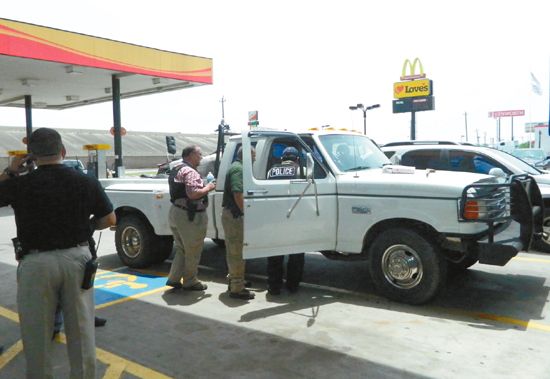 Baytown police and their SWAT team answered a call last Friday from Loves Truck Stop on I-10 at Thompson Road, where an irate person had entered the store screaming for the clerks to call the police because he was going to shoot everyone.

The incident started around 11:30 a.m., as the man later identified as Eric Scheele, 53, from Highlands, entered wearing only underwear, and carrying an object in his hand that was at first thought to be a gun, and later a cell phone or similar object.

After the initial outburst, Scheele reportedly retreated to his truck parked in front of the store, as the police were called. Upon arrival with a large contingent, including the SWAT team, the officers surrounded Scheeles truck and began to negotiate with him.

Police moved everyone to a safe location at the back of the store, and warned nearby businesses. They also blocked his truck with an armored vehicle, as they attempted to calm and control the situation. They did not know if Scheele was armed, and could hear him muttering to himself, and eating. He also had something in his lap, which at first was thought to be a weapon, and later turned out to be food. He resisted the police attempts to talk or take him into custody, taunting them to shoot him.

After about two hours of the standoff, with by-standers and television helicopters watching the drama, the police managed to talk him into surrendering.

Scheele was then taken to the Harris County Psychiatric Center in Houston, to be evaluated. At this time he has not been charged with any crime, pending the psychiatric review. Authorities say that the Sheriffs office has dealt with him before for similar activities.