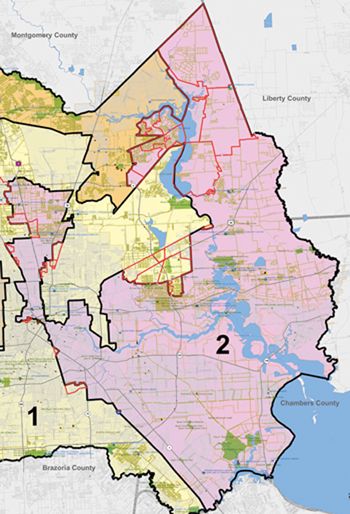 HUFFMAN  Jack Morman, not Cactus Jack Cagle, now represents this area to the Harris County Commissioners Court; meaning that Precinct 2 has assumed the responsibility for almost all of the spraying for mosquitos and other county services near Lake Houston and the San Jacinto River.

The redistricting plan that was drawn by the legislature was changed following submission and pre-approval by the United States Justice Department in 2011. Harris County Precinct 2 would be the largest in land area and has been designated a Hispanic Opportunity District. The plan was delayed by a lawsuit.

On August 2, U.S. District Judge Vanessa Gilmore struck down a lawsuit filed in 2011 and having been fought in court since November of 2012. Several scenarios were presented as alternatives and several compromise versions were offered to settle the suit but Congressional District and County Precincts were uncertain even during the 2012 election.

Finally, the federal judge determined that attorneys representing the Latino community had failed to prove that the redistricting submission was unconstitutional due to the Voters Rights Act or that race was a predominant factor in the design of the plan.

Morman, elected to Harris County Commissioners Court in 2011, is a graduate of Deer Park High School and Baylor University Law School. Since he presided over the Crosby area , he almost immediately implemented plans to be the infrastructure Commissioner and began in Crosby, Better Streets 2 Neighborhoods, which started work on local roads some of which the commissioner found had not been updated in 30 years. Currently, in the Newport Subdivision South Diamondhead Boulevard is currently undergoing a conversion into an actual boulevard.

Morman mentioned updates to ball parks at the I.T. May Community Center during his talk at the Huffman dinner. He expressed a wish to hear from the community on what changes and needs the Huffman community feels important.

If a constituent was having an issue with Pct. 4 and it hasnt been resolved before the transition, they need to call us so it can be addressed and resolved.

Items of confusion related to the redistricting plan were pointed out at the Crosby-Huffman Chamber of Commerce New Educators Luncheon. U.S. Congressman Ted Poe, R. Texas District 2, had a representative attend and say, We really miss Crosby, many local residents are not aware that they are now represented by U.S. Congressman Steve Stockman, R. Texas District 36. Stockman did not attend the meeting, nor did a representative of his. Wayne Smith, R. 128th Texas House District now represents Crosby and the portion of Huffman that is just a mile or so north of FM 1960 at FM 2100, west about a mile. Dan Huberty, R. 127th Texas House District represents the rest of Huffman, west to Humble. In law enforcement, Precinct 3 Constable Ken Jones heads patrols of the same area as before redistricting for Huffman.

END_OF_DOCUMENT_TOKEN_TO_BE_REPLACED

Educators Luncheon marks Back to school 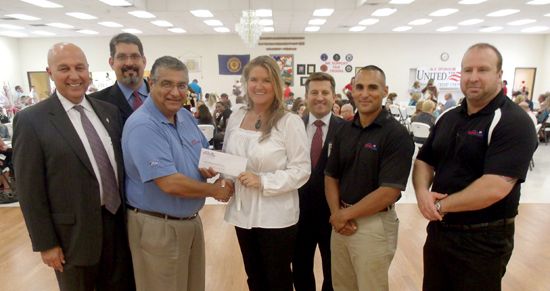 CROSBY  The 2013 New Educators Luncheon brought much of this area and neighboring Huffman to the American Legion Post 658 on a bright and sultry Wednesday.

For the 26th time, the emphasis of this areas Chamber on quality education was evident and participation at a maximum.

Susan Armstrong having headed the Education Committee for years with support from Venita Smith passed the torch to Judy Sirocka of Crosby Office Supplies, to head up the planning for the event which went smoothly.

Dr. Moore jested that he had found a playbook of Huffman Falcons Football team, Dr. Soileau admitted he had planted that playbook for Moore to find in the interest of full disclosure.

Crosby Church provided teacher supplies arrangements at each table that were decorative and practical. Representative Dan Huberty R., 127th District, lavished gifts on both districts. Huberty is a strong proponent of efficient and quality education having served as Chairman of the Humble School District before his Texas House election. United Community Credit Union was chief sponsor and competed with Community Resource Credit Union for best prize contributor. Goodybags of items from local businesses were offered to each of the new educators seperated for Crosby and Huffman teachers.

The next C-HCC meeting is the picnic in the park to be held Sept. 19 at the Precinct 2 Park behind the Crosby library with special booth and emphasis on efforts of the Beautification Committee.