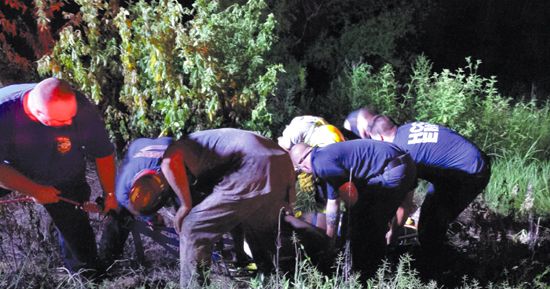 CROSBY-HIGHLANDS From the kickoff at the local Cougar Football Field until just past midnight Tuesday morning a strange series of incidents and mayhem occurred, some were fatal.

According to the local first responders for Crosby, the ambulance service HCESD#5, thirty emergency calls came in from Friday at 7:00 p.m. until Monday at 7:00 p.m. In Crosby during this time there were four Lifeflights, six car wrecks, 3 All Terrain Vehicle crashes, a drowning, a fatal shooting, a pair of cardiac problems, 14 unrelated medical problems and assorted injuries. Tuesday saw two motor vehicle accidents before noon in Crosby.

Experienced responders say that on normal weekends one can anticipate 6 such incidents, locally about three of those health related.

It all seems to have started, according to some deputies, on Friday at 2:30 p.m. at B.J. Marina in Huffman, a woman was pulled from the water by emergency rescue crews. Her case was one of near drownnning outside of Crosby.

Related to ATVs  one mans extended Saturday was critical at 1:30 a.m. Sunday at DownSouth Off-Road Park just off of the Beaumont Highway. Witnesses say the 30 year old had been drinking and should not have been riding. When he crashed an ATV, he hit his head and fell into a nearby pond. Lifeflight helicopters gave him a lift to Hermann Hospital.

Monday at 6:14 p.m. a call came from Cecils on Ulrich that a woman over the age of 30 was found under the water. Her body was take into the custody of Harris Country Medical Examiners Office for determination of facts.

The ambulance service in Crosby, Harris County Emergency Service District #5, was willing to issue a statement concerning all the incidents of the Labor Day weekend, according to Christy Graves, We expect to have a busy weekend on most weekends due to the community being at its most populated. However, this weekend was extraordinary to sum it up. We are always prepared to respond regardless of the call volume surge.

I do believe there are several contributing factors in our elevated request for assistance; the Labor Day Holiday, the increased number of recreational activities Crosby has to offer, and the elevated temperature (heat) to name a few. Oddly, this weekend we had a large volume of our local citizens out of town for opening season for Dove Hunting.

Often times we see our increases in request for medical assistance from visitors to our community. Especially, if they have pre-diagnosed medical conditions. I am very proud of the professional job the EMS and Fire did during the labor day holiday, they worked hard during extreme heat and duress for others best outcomes. This is what the communities of Crosby and Barrett Station are all about.

The U.S. Coast Guard has posted several studies related to boating safety and their findings among others indicates: Almost seventy-one percent of all fatal boating accident victims drowned, and of those, almost eighty-five percent were not reported as wearing a life jacket. Seven out of every ten boaters who drowned were using vessels less than 21 feet in length. Operator inattention, operator inexperience, improper lookout, machinery failure, and excessive speed rank as the top five primary contributing factors in accidents.