NORTHEAST HARRIS COUNTY  People that were deliberately cutting cable television lines are subject to being turned into law enforcement by those that know what they are up to, thanks to incentives now totalling $30,000.

Incidents of vandals cutting cables in Highlands, Crosby and Huffman along with two incidents in the west end of the county prompted the Harris County Sheriff Adrian Garcia to confer with Comcast Houston senior executives and raise the amount of reward for information leading to arrest or filing of felony charges up to $30,000.

Incidents over the last several months cutting the fiber optic cable have resulted in disruption of services and constituted a safety problem as 9-1-1 system services were interrupted.

Through this partnership with Crime Stoppers and Harris County Sheriffs Office were hoping to raise public awareness and put an end to this senseless vandalism, said Ray Purser, vice-president of government and public relations at Comcasts Houston region. The disruption of service caused by these deliberate acts affects peoples lives including the ability to call 9-1-1 in the case of emergency.

Of nine incidents that seriously disrupted services, seven were in northeast Harris County, four were in Crosby, two in Highlands and one in Huffman, east of the Commons of Lake Houston.

Both Highlands incidents were near Sralla Road.

All four of the Crosby incidents were not far off U.S. 90  two at Gulf Pump Road and two nearer to the Liberty County Line.

Anyone with information about the identity of the suspect(s) is asked to contact CrimeStoppers. CrimeStoppers may be reached by calling 713-222-TIPS.

END_OF_DOCUMENT_TOKEN_TO_BE_REPLACED 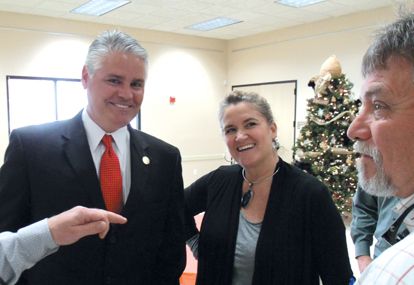 HUFFMAN  Dan Huberty R., 127th Texas District, spoke to the CrosbyHuffman Chamber of Commerce describing accomplishment of the past legislative session at the I.T. May Community Center on Nov. 21.

The widening of FM 2100, preparations for new infrastructure, new legislation to protect fire arm owners, new provisions for a shorter Concealed Handgun License class, balancing the state budget, the cost of education, border security and the amount of testing were some of the subjects covered during his address.

The trend indicates that by 2040 the population will double to 50 million. The balanced budget requirements has kept the legilslature working to keep Texas solvent and moving forward.The impact of 1/3 of the nations natural gas reserves within this state has helped due to royalties. Today Texas is a donor state to the United States getting back about 87¢ for every dollar sent out while states like California get back $1.10 for every dollar they send into the federal system.

Huberty indicates that about 54% of all state funds go into education. 30% of that into health and human services. The teachers retirement fund has been made actuarialy sound. Education Reform was another concern this year, House Bill 5 reduced the required testing for school children from 15 to 5 tests per year.

Huberty talked about the decisions related to Obamacare. The legislature attempted to medite expendatures impacted by healthcares increase in cost. He explained why they declined to implement the increase in Medicade.

While the Texas Legilature closely watches the growth of government spending and other States do not, he explained that some cuts were made. He also detailed how small businesses were given a tax relief in the last session.

The legislature provided that those receiving public assistance should be tested for drugs.

His final point was about House Bill 308 introduced by Hubertys friend, Dwayne Bohac, called the Merry Christmas Bill, it provides that Texans have a right to acknowledge traditional winter holidays in school. Children, teachers, and administrators have the right to acknowledge the holidays of Christmas or Chaukkah without reprisal. The final point drew loud applause.