CROSBY  Representative Wayne Smith, R. 128 when addressing the Crosby-Huffman Chamber of Commerce on Dec. 18 mentioned proposing a widening of FM 2100.

It was the most controversial moment of his address that drew almost unanimous acceptance of his history last year when he penned the Texas House bill to pose law enforcement capability for restricting illegal gambling houses in Harris County, supporting the Merry Christmas House Bill 308 that mandates no punishment for calling a Christmas Tree a Christmas Tree and plans for the next session to require the school districts to test kids for heart conditions if they are going to be athletes,

The latter a reference to the Cody Stephens Go Big or Go Home Memorial Foundation initiated by Cody Stephens father Scott Stephens. The foundation that has thus far enabled the discovery of heart conditions in 32 at risk students.

Smith answered, Well, I intend to ask him if he could find the money, at least some money to purchase the right of way if the State can afford most of the work.

Harris County Judge Ed Emmett, the executor of the County, told a Houston audience in December A lot of what we intend to do in Harris County is focused on transportation. Emmett then went on to explain that the Port of Houston is sitting poised to be the gateway for North America, but if we dont provide the transportation infrastructure, they are going to go somewhere else and we will stagnate economically.

Representatives like Wayne Smith will be voting on the hard hammered transportation bill later this year to determine what funding the state will be able to make available to prepare for this expansion.

Smiths engineering background has enabled him to understand the technical aspects of roadway needs and to explain the governors initiative for the Texas Water Act, passed last November by voters.

Currently demands upon Harris County to be ready for future development are manifold and including a directive from oil interests to hurry construction of Toll Road 99, the Grand Parkway from its western location to the Woodlands. The Woodlands to be the site of new development for a large oil company and then develop the Grand Parkway around to locations where new oil will be pumped from northern locations. Expansion near the Petrochemical Corridor near Highway 6 on Interstate 10 is already evident from the mammoth expansion of Highway 290.

The necessity then for FM 2100, already a traffic jam in the mornings and afternoon traffic to be expanded is becoming more obvious.

END_OF_DOCUMENT_TOKEN_TO_BE_REPLACED 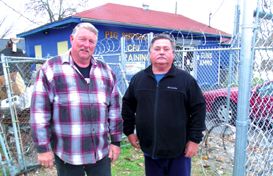 HIGHLANDS  Finally, locals have had enough of violence and theft in their area and are proposing to take action against it.

Thursday night January 2nd beginning at 6:30 p.m. at the First Baptist Church in Highlands, there is to be a Crime Watch Town Hall Meeting to discuss methods of coping with the high crime problem in this area.

Representatives from the Harris County Sheriffs Office are to be there to provide information about establishing an effective crime watch program for Highlands and answer questions. Pizza will be available at 6:30 and the meeting will start at 7 in the Churchs auditorium. The entire community is welcome.

The Sheriffs Offices Media Relations Division says that Major Steven Marino is to attend the meeting. Major Marino works in the Patrol Division.

The Neighborhood Crime Watch concept is outlined by the Harris County Sheriffs Office as mutual assistance among neighbors aimed at reducing crime at the grass roots level of looking out for one anothers interests. One important criterion is to have a minimum of 60% residential participation.

When formulating a crime control strategy, one must consider which course is more effective and less costly: hundreds of law enforcement personnel in every neighborhood and a guard at very door or adequate lighting, secure homes and watchful neighbors. It would appear that crime prevention is the most logical and most economical approach to take in crime control, according to the HCSO.

Neighborhood Crime Watch provides a means of reducing the opportunity for crime to occur, through the active participation of citizens in crime prevention.

Citizens are taught how to make their homes less of an attractive target for thieves, how to participate in Operation Identification, making their property less desirable to thieves, and how to be alert to suspicious activity in the neighborhood. The Crime Watch must also encourage residents to come forward as witnesses. Help elderly citizens and children to protect themselves against being a victim of a criminal and push for additional projects to protect these special groups of persons whenever necessary.

As most crimes occur due to opportunity, opportunities are divided into two categories:

(a.) opportunity created by the victim through carelessness, lack of attention to security and failure to cooperate with neighbors,

(b.) opportunity created by the criminal, by his skill, ruthlessness, and daring.

The appointment of the proper Chairperson can determine the success of the program. This person should have prestige within the community, an ability to communicate, and some free time. He would also develop block captains and facilitate communication with them and the Crime Prevention Unit officer from law enforcement. There are a long list of communications duties for the Chairperson.

Retired Harris County Sheriffs Deputy Rusty Mayfield was approached by a crime victim that lost a family member last calendar year in one of the five murders that occurred here then. He has been a burglary victim five times, he indicates. Only three of those homicides were solved.

Mayfield himself was a crime victim lately, his store Pig Supply Inc. was broken into on Black Friday, Nov. 29, and firearms were stolen by the two well photographed burglars. Mayfield has taken extra precautions now beyond the camera surveillance. He enlisted the services of retired Harris County Sheriffs Deputy Mike Smith, also of Highlands, owner of Quality Construction & Fence to construct some extra security features against burglars for his store.

Reactions based on violent crime

A look about Highlands will find windows broken and replaced by board, and vacant houses have begun to appear but that may be the result of normative attrition. But what is now being talked about is the appearance of known gangs tagging crime scenes, two unsolved murders, about 90% of the local thefts have been unsolved. One neighbor said, Highlands has become the Las Vegas of northeast Harris County, it is not just that they are illegal, it is the fact that like the one across from the water office it was robbed in broad daylight.

Sheriffs Deputies know of locations where crystal methamphetamine is sold such as on Clear Lake Road, the scene of a murder in December in which a beloved local great-grandmother was killed in her home and the house set ablaze to cover the evidence. Then there is the super secret homicide on the north end of Highlands that was now known to be bestowed by two shots from a high powered rifle on November 18.

The frequency of arrests have not slowed, on Dec. 19 Precinct 3 Deputies arrested a known drug dealer in the Highlands area with an automatic rifle, drug paraphernalia and felony possession of crystal methamphetamine. A sting of drug arrests have been made that indicate the largess of the trade locally and generally by those that are new in town.

The the day after Christmas, Deputies with the Harris County Sheriffs Office were called to a Highlands Vol. Fire Dept. service area, McNair early Thursday morning after a mans body was found on the shoulder of Harrison Street near Perry Street around 2 a.m. Deputies said the mans body appeared to be dumped at the location. No further information was immediately available, but deputies said more details would be released later in the day.

According to Mayfield there have been instances when Precinct 3 Constable Deputies made local arrests but the then District Attorney would not take charges against the suspect.

END_OF_DOCUMENT_TOKEN_TO_BE_REPLACED 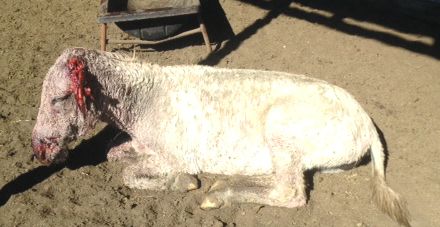 HIGHLANDS A local rancher warns of three dogs that have viciously ravaged eight of her horses and a donkey resulting in their deaths.

Jeanne McClanahan took this reporter on a tour of her ranch where three pit bulls or mixes attacked her livestock since Thanksgiving, Christmas, last Friday and Saturday. The bucolic setting with miniature horses, Shetland ponies, donkeys and cattle was upset by the attacks such that many of her animals fear to venture much beyond the security of her house.

McClanahan has been in touch with neighbors and she is not the only one to have trouble from the dogs. It is her hope to alert the neighborhood before the animals can target children and to possibly prevent inflicting further harm by having neighbors report the band of dogs.

McClanahan actually had occasion to see two of the three dogs as they scampered away. She describes them looking like pit bulls, one is grey and the other reddish brown. The third was just beyond eyesight in the brush. The grey dog appeared to have a collar, or something around its neck.

She contacted Harris County Animal Control, or now called Harris County Veterinary Public Health Division. She indicates her Christmas present this year was to find one of her horses mauled to death and that two days later a humane trap was placed at the location of the bodies of her livestock by the Division. Neighbors are asked to help catch these ravaging dogs by reporting them if seen by calling (281) 999-3191. She likewise contacted the Harris County Sheriffs Office and deputies made a report due to the value of livestock lost to the attacks. It is important to other ranchers and parents to be on the alert for the dogs and to report them if seen.

She has narrowed the area where the dogs must be coming from as near Fig Orchard Road or the nearby subdivision.

The dogs appear irregularly and only at intervals. McClanahans heartbreak at losing the animals is evident and it seems to bother her that she must always keep a firearm at hand just to work on her ranch.