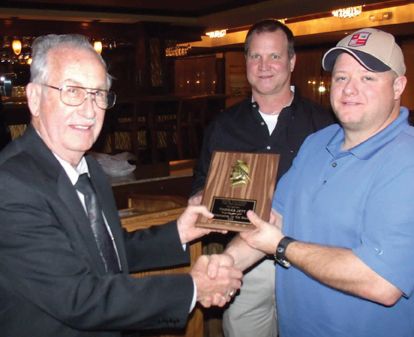 KEMAH  In a gala celebration of the individuals that volunteer to save lives and property the Crosby Volunteer Fire Dept. held their Annual Banquet at Landrys Restaurant here, last Saturday.

Consider that Crosby Volunteer Fire Dept. was called on for services 956 times last year and 808 were within the fire district and one comes to understand the importance of these volunteers standing between their community and mayhem.

Awards for Firefighter of the Year, Officer of the Year, service awards, Most Response awards and a new Safety/Mentor Award were bestowed upon those elected to receive them by their comrades. It was a great natured celebration attended by the Board of the local Emergency Service District and special guest of Emergency Service District #4 board and HCESD#5 Coordinator, Christy Graves.

In addition to the awards ceremony a buffett surf and turf dinner. Following the awards, Rodney Reed poked fun at some of the more humorous incidents and individuals involved in those incidents in the prior year.

This year the Firefighter of the Year went to Thomas Jett, to his surprise. He indicated that he did the same as the rest and was honored by the recognition of his fellow firefighters.

Kevin Pipes, a Fire Marshal and active volunteer was selected as Officer of the Year and that token is said by his peers to represent lots of devotion. When asked why he got the award he simply responded that The membership thought I did the best job of the seven of us.

But when further pressed Pipes admitted I did not expect to receive this award, so many other officers contribute so much to the department. I spent a lot of time and hours at the fire department I feel like the membership saw my contribution more than others efforts, but it was certainly worth it to get the award.

Isaac Pinson was awarded for 10 years of service to the department. He is also a member of the executive board of officers.

Sam Parker and Clay Budd were recognized for the number of calls they responded to within the year.