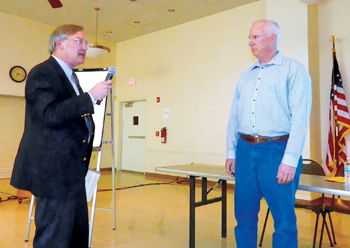 “Citizens unhappy with lack of action on toxic waste pits”

HIGHLANDS  Over one hundred local residents packed the San Jacinto Community Center last Thursday night, Jan. 30, for a public meeting to hear the federal EPA, or Environmental Protection Agency, report on the status of work to solve the toxins in the waste pits in the San Jacinto River. They presented six options ranging from cover in place, to full removal of the contaminated sediment.

After listening to a long presentation and slide show from the EPA staff, which seemed similar to the presentation exactly one year ago, but in slightly more detail, the audience focused on the sixth and final scheme, which promised complete removal of the toxic material. EPA project manager Gary Miller explained that this option had pros and cons.

Although it promised complete removal, nevertheless is was expensive, took a long time, and therefore exposed the community to spread of the toxins if a hurricane should strike during the process. The cost estimate was a wide range from $104 million to $636 million, and the time required to remove 208,000 cubic yards of sediment would be 16 months. The polluting companies will have to pay for the remediation, Miller said.

Miller revealed a new bit of information of grave importance: the South Impoundment, which up till now has not been part of this study, is larger and contains more toxins than the North pits, and will become the next step in the Superfund study. This area therefore threatens homes in the Channelview and west bank areas.

Present at the meeting were a number of county and state officials, and what might be termed independent environmentalists, as well as residents of Highlands, Lynchburg, and Channelview.

This group included local residents that have formed the San Jacinto River Coalition; the Texans Together environmental group; and the Galveston Bay Foundation.

Fred Lewis, president of the TexansTogether organization, questioned EPAs Gary Miller on a number of points, including why the state has not conducted an epidimiology study, why redfish and flounder are not included in the tests or warnings, and why the EPA is relying on reports from the PRP, or parties responsible for the pollution.

Other issues raised by the audience included the high incidence of cancer in some areas of Highlands; the dredging of sand in the river that is obviously spreading toxins to other areas; and the activity of the barges north of I-10 that are stirring up sediment and poisonous materials.

Miller said that the Final Report, termed a RI/FS, or Remedial Investigation/Feasibility Study, would be ready late in 2014, and at that time EPA would make a decision on how to deal with the waste pits permanently.

END_OF_DOCUMENT_TOKEN_TO_BE_REPLACED

CROSBY  The local school board approved some of the early designs on the new high school and projects to start this Summer.

A special called board meeting on Feb. 3 was productive in getting to view some of the areas future features, including a new Ag. barn, layout of the school and facilities. The board also approved with all members present starting air conditioning at Drew Intermediate, Barrett Primary and Newport Elementary Schools. The Newport Elementary driveway stacking is also for this Summer.

The Cre-8 Architects are also moving forward with finding a Contract Manager, person responsible for building the projects.

The new high school is figured to be 408,000 square foot against the 285,000 square foot current facility. It is to dwarf the Walmart that it is to be west and behind. A two to three story building with mostly flat roofs, the board is in design development phase with many more phases to hurdle. Some colors and features will still have to be worked out. The next phase is schematic design where details will be worked out.

One notices that the plans show that the front entrance goes directly to administration and then security awaits next. Maximum usage of natural light and glass walls is a feature with a highly advanced media area, containing a library with two classroom spaces, conferencing area, three dimension printer, flat panel work station, quiet reading station, a sloped floor, lecture auditorium and state of the art circulation desk. Behind Administration will be an area with two isolation rooms for the clinic.

This school will have an attached Ag Science Building with gabled roof and outside a separate highly designed Ag Barn.

The second floor is to feature arts, communication arts, information technologies, in one area.

Another area on the second floor is to feature science labs, technical engineering and mathematics labs.

END_OF_DOCUMENT_TOKEN_TO_BE_REPLACED 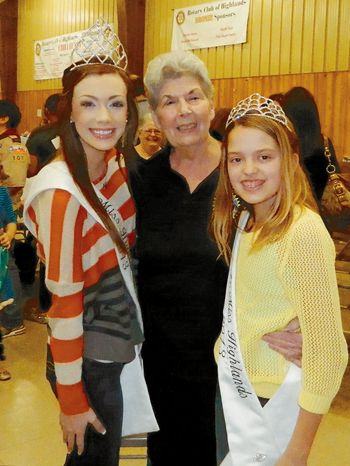 HIGHLANDS  What does it take to win a new car? For Betty Brewer, it only took one ticket and a lot of luck. After selling over 50 raffle tickets to her friends, for the chance to win a new Dodge Challenger, or a Ram pick-up truck, she decided to buy one for herself, the night before the drawing at the 39th annual Rotary Chili Feast. So she reached into her bag and pulled out a ticket at random. Only one. And thats what it took to win the new vehicle.

The audience at the event last Saturday was thrilled when Betty won, because she is known by everyone in town for her hard work and willingness to help others, so it was well deserved that she won something for herself.

Betty has been honored in the past for her generosity and community spirit. She has received awards from the Masonic Lodge #231, the Pilot Club, the Highlands Chamber, the Rotary Club, and Highlands Horizons, as well as sports associations, church, and more. Congratulations Betty, and enjoy your car.

Rotary Chili Feast chair Raymond Gonzalez, and president Aaron Cole, announced that the event had been quite successful, netting about $65,000 which will be used for community projects through the year.

Several hundred persons attended the event, which is always enjoyed for its good chili, renewing old friendships, and the thrill of the auctions and raffle draw.

Rotarians and local businesses sold almost 700 tickets to the raffle, and auctioneer Linn Spell sold about 75 donated items, to help raise the money for the club. There were also silent auction items, and a card draw for a shotgun.

In addition, a number of local businesses contributed as sponsors to the event.