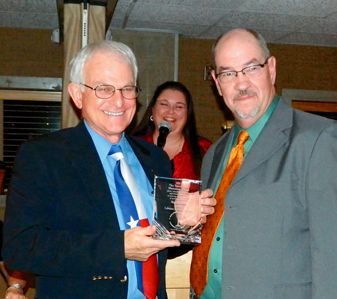 HIGHLANDS  Almost 150 of this communitys citizens gathered at the Monument Inn last Thursday night, to install the new Chamber of Commerce board, and give out Community Awards.

Emceed by Traci Dillard, the evening was filled with fun, jokes, and fine food.

The top award, for unselfish community service, is known as the Terry Davis Award and went to attorney Weston Cotten.

It was presented by previous winner Jessica Woods, with the help of Chamber President Jim Wadzinski. She explained that the awards this year were given in the winter, instead of at the end of summer.

The new board was sworn in by Judge Don Coffey, using a new text with a mix of humor and seriousness.

Returning board president Jim Wadzinski gave a talk on past accomplishments of the Chamber, and his goals for the coming year.

He noted 5% growth in membership, a successful holiday food drive that served 106 families at Thanksgiving, and economic growth in the area including the refineries in Baytown and retail build-up along I-10 near Highlands. These include a new Bucees truck stop, and a new Wal-Mart at Highway 146.

Wadzinski promised more accomplishments for the new year, including 41 streetlights installed in Highlands, a traffic study on Main Street, a traffic light at West Houston and Main, a Sheriffs substation located in the Woodforest Bank building, and close working relations with the Port of Houston, Lee College, and San Jacinto College.

He also expects membership growth to reach 25%, and rebuilding of Main Street to 4 lanes plus a turn lane. 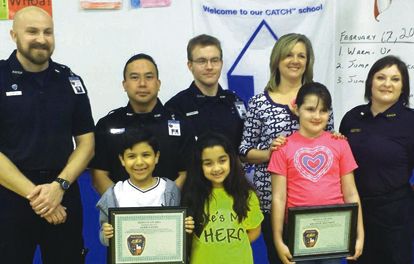 CROSBY  Three extraordinary and heroic Second graders were recognized for their efforts at Barrett Primary February 18.

In a special school assembly, Jake Cantu and Krystal Kennedy were both presented the Hero Award by H.C.E.S.D. #5 for their heroism and quick response in a crisis.

 On February 11, our sweet Jenna choked on a hard piece of candy, which was lodged in her throat and prevented her from breathing. stated Julie Kulak, Jennas Mom. Jake immediately asked Jenna if she was choking and performed the Heimlich procedure, successfully dislodging the candy. Meanwhile, Krystal ran with several children to locate the school nurse. When the group ran down one hall, Krystal chose to go in the opposite direction, finding the nurse and saving valuable time.

Both kids remained calm, which is valuable during these critical moments points out Emergency Services Director, Christy Graves.

This is what leads to a successful outcome, Graves continues, We are happy to recognize these amazing kids on this day!

Jake had seen the Heimlich illustrated on a poster and his dad taught him how. He is only 7 years old. Its an incredible reminder that kids are remarkably bright in ways that we often underestimate.

Graves provided an informative description of the life saving maneuver from recognition to success. The universal sign for choking is hands clutched to the throat. If the person doesnt give the signal, look for these indications:

If choking is occurring, the Red Cross recommends a five-and-five approach to delivering first aid:

 Give 5 back blows. First, deliver five back blows between the persons shoulder blades with the heel of your hand.

 Alternate between 5 blows and 5 thrusts until the blockage is dislodged.

The American Heart Association doesnt teach the back blow technique, only the abdominal thrust procedures. Its OK not to use back blows, if you havent learned the technique. Both approaches are acceptable.

To perform abdominal thrusts (Heimlich maneuver) on someone else:

 Stand behind the person. Wrap your arms around the waist. Tip the person forward slightly.

 Make a fist with one hand. Position it slightly above the persons navel.

 Grasp the fist with the other hand. Press hard into the abdomen with a quick, upward thrust  as if trying to lift the person up.

 Perform a total of 5 abdominal thrusts, if needed. If the blockage still isnt dislodged, repeat the five-and-five cycle.

If youre the only rescuer, perform back blows and abdominal thrusts before calling 911 or your local emergency number for help. If another person is available, have that person call for help while you perform first aid.

To perform abdominal thrusts (Heimlich maneuver) on yourself:

First, if youre alone and choking and you have a land-line phone, call 911 or your local emergency number immediately. Then, although youll be unable to effectively deliver back blows to yourself, you can still perform abdominal thrusts to dislodge the item.

 Place a fist slightly above your navel.

 Grasp your fist with the other hand and bend over a hard surface  a countertop or chair will do.

 Shove your fist inward and upward.

Clearing the airway of a pregnant woman or obese person:

 Position your hands a little bit higher than with a normal Heimlich maneuver, at the base of the breastbone, just above the joining of the lowest ribs.

 Proceed as with the Heimlich maneuver, pressing hard into the chest, with a quick thrust.

 Repeat until the food or other blockage is dislodged or the person becomes unconscious.

Clearing the airway of an unconscious person:

 Lower the person on his or her back onto the floor.

 Clear the airway. If theres a visible blockage at the back of the throat or high in the throat, reach a finger into the mouth and sweep out the cause of the blockage. Be careful not to push the food or object deeper into the airway, which can happen easily in young children.

 Begin cardiopulmonary resuscitation (CPR) if the object remains lodged and the person doesnt respond after you take the above measures. The chest compressions used in CPR may dislodge the object. Remember to recheck the mouth periodically.

Clearing the airway of a choking infant younger than age 1:

 Assume a seated position and hold the infant facedown on your forearm, which is resting on your thigh.

 Thump the infant gently but firmly five times on the middle of the back using the heel of your hand. The combination of gravity and the back blows should release the blocking object.

 Hold the infant face up on your forearm with the head lower than the trunk if the above doesnt work. Using two fingers placed at the center of the infants breastbone, give five quick chest compressions.

 Repeat the back blows and chest thrusts if breathing doesnt resume. Call for emergency medical help.

 Begin infant CPR if one of these techniques opens the airway but the infant doesnt resume breathing.

If the child is older than age 1, give abdominal thrusts only.

To prepare yourself for these situations, learn the Heimlich maneuver and CPR in a certified first-aid training course.