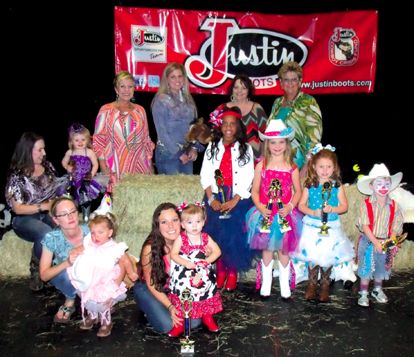 CROSBY  Each year the Crosby Fair & Rodeo hosts the Lil Mr. and Miss Cowpoke Pageant before the presentation of scholarships and then graduation so the little guys, age 2 to 8, can beam before big brother and sister are all the story.

This year all participants received a trophy and the winners get to represent their community at the Crosby Fair & Rodeo and drive through the Rockn C Arena for all the fans to see.

Rodeo Dress first places were Carsen Fincher for 0-2, Holli Elledge for 3 to 5 and McKenna Robinson 6-8.

Much excitement is being focused this year on the Rodeo Parade to happen Saturday June 7 at 10:00 a.m. It occurs when the Rodeo Cook-off is going on inside the fairgrounds. Bill Murff and family will be the Parade Marshals. Friends, Families, Representatives and

Organizations of the community are encouraged to enter a float or vehicle in support of Sticking to Our Roots.

CROSBY Last Thursday Athletic Directors of Crosby and Huffman told the Crosby Huffman Chamber of Commerce of their accomplishment and much about their philosophies of coaching inside the Crosby Community Center.

Coaches Jeff Riordan and Mike McEachern enlighten listeners about the status of athletics locally, their approaches to athletes and athletics and finally of their accomplishments last season.

Crosbys Jeff Riordan spoke first opening with Code Red is bigger than wins and losses. and We have athletics for students to become great men and women, to see a kids life change.

Many of the listening business community were ready to ask to be put into play after the first few minutes.

His explanation of what a coach is tasked to do revolved around a quote from Jimmy Johnson,  Treat a person as they are and they will stay as they are, treat them as they could be and they become as they should be. He indicated he always tries to challenge those he encounters to become a little more of their potential.

The Crosby season showed much inspiration this year not only in the powerful 10 record smashing football season but also in Power Lifting, Golf, Boys and track. The girls had success also, Crosby softball had 198 runs, 244 hits, 159 runs batted in, 42 doubles, 21 home runs, 5 home runs in a single game, and Ariel Clogston cracked 20 home runs in a career.

The strategic challenge Riordan offers is Crosby Cougar takeover is our mission. When the Crosby bus pulls up, I want other schools to say, Uh Oh.

Mike McEachern spoke less about records than about his approach to teaching, his communities values, and the importance of being winners in the intrinsic meaning of the word.

I always tell the kids, If you are sitting around eating Cheetos and watching Oprah, somebody is getting better. If you are doing nothing someone is outworking you, he emphasized.

Morals and values need be focused on Doing right. and an expectation to do well.

Crosby and Huffman can expect a scrimage in football next year.