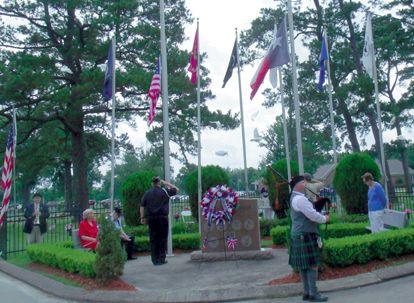 HIGHLANDS  Each year the local cemetery hosts a Memorial Day Service to honor those that served their country.

Sterling-White Funeral Home & Cemetery puts on a great program every year and we are honored to do it. said Jeff Moore after over 200 people attended services last Monday that exhibited a full compliment of features.

The services began with a procession of Crosby JROTC bringing for a Memorial Wreath at the Wall of Honor under the direction of Major Quinton Farr and Sergeant Tim Meadows. Two female students laid the wreath upon the Garden of Honor Memorial Stone as Captain Thomas Harper (retired) directed the raising of Old Glory and the Texas Flag.

Opening prayer was lead by Pastor Jerry Hovater of the Little Country Church in New Caney and now Crosby.

Two special guest speakers in uniform spoke during the services. U.S. Air Force Col. Mark McClelland spoke on the meaning of Memorial Day and its important to a free society and Leiutenant Col. Leth spoke on the flag of the Medal of Honor and the service of recipient David H. McNerney.

The sermon concerning Memorial Day was delivered by Pastor Hovator.

Don Guillory of the David H. McNerney American Legion Post 658 read the roll call of names of the servicemen laid to rest within Sterling-White Cemetery. Family members called out to acknowledge their attendance.

Taps was played professionally by Dana Read of New Orleans after having returned from a gig in New York City.

Pipe Major Tom OBrien of Texas Bagpipes played Amazing Grace as Janeen Scheider set doves flying before the memorial Stone of the Garden of Honor. Rev. Sam Purkhiser of Northeast Freeway Baptist Church a veteran of Iwo Jima and his wife sat near the stone. Iwo Jima cost 5,900 American Marine lives and 17,400 were wounded in the month and a week battle beginning in February 1945.

I would like to thank all of you for attending our Memorial Day Services. It is a great honor to serve you and your loved ones. I would also like to thank my staff for all their hard work and dedication, and a special thank you to all the local vendors who have contributed to this years services. said Funeral Director Moore.

During research it was discovered that this service in Highlands is one of few remaining funded by a single private enterprise source and not by governmental or municipal agencies.

END_OF_DOCUMENT_TOKEN_TO_BE_REPLACED 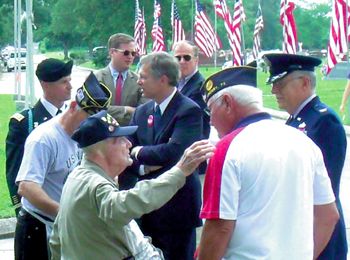 TEXAS  The catbird seat is being held by conservatives for the November election but not everyone that won was Tea Party endorsed in the Run-Off Primary last Tuesday.

Replacing Steve Stockman as the US Congressman for an area that runs from inside Harris County all the way to the Louisiana border is Dr. Brian Babin, a dentist and the former Mayor of Woodville. He won over Ben Streusand 58% to 42%. Streusand a Tea Party operative and former mortgage banker funded his own campaign and was former chairman of Americans for Prosperity.

Streusand lives in Spring and has houses west of the district. He attacked Babin for raising property taxes in a factually disputed ad.

Attorney General Gregg Abbott must be looking at election results with a smile at fellow Gubernatorial candidate Wendy Davis as he waits on the November election. Not so many Democrats turned out for the Primary.

The Lieutenant Governors race got the most notice this year. Dan Patrick, a Tea Party radio talk show host, defeated David Dewhurst 65% to 35%. Dewhurst the current Lieutenant Governor was an energy mogul that many Republicans blamed the fiasco of the abortion filibuster upon that would launch Wendy Davis into the spotlight.

Patrick will face Senator Leticia Van De Putte of San Antonio in the November election that has already weighed in on Patrick saying he would stop the illegal invasion from Mexico and lower property taxes.

The Democrats have their work cut out for them pitting David Alameel against Senator John Cornyn, the Minority Whip of the Senate, in his third term bid. Steve Stockman resigned his congressional seat to run against Cornyn in an ineffectual but amusing race. Alameel defeated Kesha Rogers Tuesday in a landslide. Kesha is a Lyndon LaRouche devotee that promised to impeach Obama.

In the race for Attorney General Dan Branch conceeded to Ken Paxton at 8:50 p.m. as Paxton had surmounted 63% of the vote. Ken Paxton will face Sam Houston in November. There is a history lesson in there somewhere.

The Ag Commissioner had two Democrats and two Republicans run that never said a word about farming during a drought. Republicans Sid Miller and Tony Merritt did talk about gun rights and abortion however in their ads. Sid Miller got a rare endorsement from Gov. Rick Perry and had Ted Nugent as his campaign treasurer. He had been a representative in the Texas House for over a decade but lost about two years ago.

Someone once said that in the event of rain Democrats turnout spacely. Judging by the percentages it must have rained all over Texas.