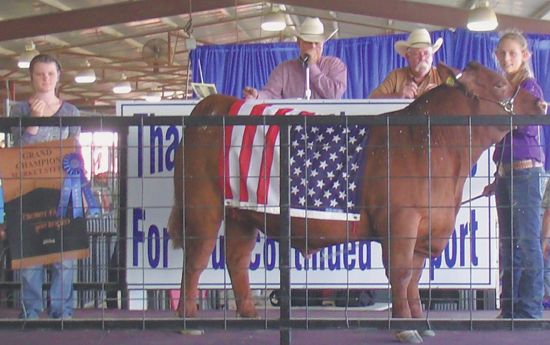 CROSBY  June 11 was the day that the Crosby Fair & Rodeo hosted the Annual Livestock Auction and this year sals and re-sales topped a new record.

With a total over $24,000 more than last year the Rodeo Board can continue to boast of expansion while bestowing opportunity and cash to exhibitors.

Over $50,000 came in Grand Champion Sales alone this year in the Crosby FFA & 4-H Auction and there were exhibitors out to third place that sold livestock.

This year one of the flag bearing riders inside the arena during the rodeo was also the Grand Champion Steer Exhibitor, Meagan Nash. Meagan and her sister Madison have been thoughout Texas learning all there is to know about livestock.

On it went into the night as the community rallied about the concept of a Livestock Auction to provide educational opportunities to area youth that will work with the programs.

Repeatedly, the efforts of the parents of these exhibitors in contribution to the community prosperity is most gratifying for those outside the events.

END_OF_DOCUMENT_TOKEN_TO_BE_REPLACED 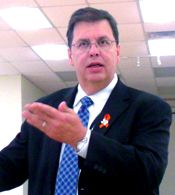 CROSBY-HUFFMAN It looks like as early as 2019 drivers on FM 2100 can expect to move a little faster on two lanes in both directions.

The Crosby-Huffman Chamber of Commerce had as guests last Thursday not only TXDoTs Quincy D. Allen, P.E. but also Jeremy Phillips, Senior Director of Infrastructure for Harris County Precinct 2 Commissioner Jack Morman. Along with them as guest, Dan Huberty R., District 127 Texas House of Representatives.

We are really picking up steam on FM 2100, Quincy Allen,Deputy District Engineer Houston District said. Allen was instrumental in the completion of U.S. 90 and helped move through the overpass of the Union Pacific railroad tracks in Crosby.

Right now, we are looking at what our right-of-way needs are and well start the process of dividing right-of-way. Weve got to get an environmental study done to make sure were not disturbing the wetlands or vegetation that might be in danger but that process takes time and weve got that started, he said.

This proposed project sought by the Crosby-Huffman Chamber of Commerce on FM 2100 is to make four lanes throughout the eight-mile stretch from FM 1960 to Hare Road. Costs should run about $60 million and is expected to be submitted to a project selection panel in August 2014.

Allen suggested that Wayne Smith, R. 128th Texas House of Representatives, had been a prime mover of the project and often offered questions and suggestions engineer to engineer.

According to Wayne Smith, I met with TXDoT not just those in Austin but also those there about making improvements to FM 2100 a few times and Ive met with the county a few times. The county has some responsibility in that corridor and Jack Morman really wants it done. To relieve the congestion will take a combined effort working with TXDoT, the House of Representatives and Harris County Commissioners. I think we have placed a priority that we want to get done.

Jeremy Phillips and I have been able to work together on several projects and Im here to tell you point blank that this is about the strongest partnership that I have had with Harris County in a certain area in a long time, said Allen.

Were confident that the need exists for this area. This roadway is high on that list and we are confident that it will be selected, approved and were pushing ahead, Allen said. Were going to start our design work, developing our partnerships with the county and some others; Im fairly confident that this thing is going to go.

We are fairly confident now that it will not get sidetracked. Rep. Smith stated, Environmental is going on now until about 2015 then we should be able to do the right of way. Im looking for about 2016 or 2017 for the shovels to start.

Dan Huberty answered this reporter that Expanding the other side from New Caney down to FM 1960 going through Huffman is what we are focused on going into the next session, getting the additional funding for that is going to be critical.