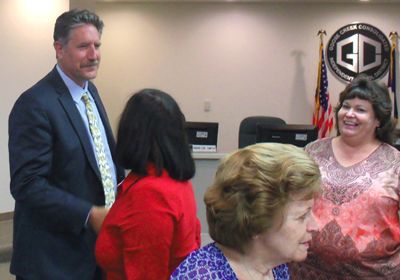 BAYTOWN  At the same special board meeting for Goose Creek Consolidated Independent School District as Dr. Salvador Cavazos resigned, Randal OBrien was named as Acting Superintendent for the district.

OBrien holds a bachelors degree in business management from East Texas Baptist University, where he played basketball and tennis.

He also holds a Masters of Education in Administration from Sam Houston State University and is nearing completion of his doctorate at Beaumonts Lamar University.

As Deputy Superintendent for Administrative Services, OBrien has overseen the planning, design and development of the three new elementary school campuses and is in the design phase of other bond projects, such as the new Transportation Center and the new Data Technology Center. He also supervises Food Services, Athletics, Maintenance and Operations and Transportation.

I am looking forward to serving the district as well as the community in the role of acting superintendent, said OBrien. As our staff and students return to school, we at Goose Creek CISD appreciate the communitys support of our district, and we plan to have a great start to the 2014-2015 school year. We would like to focus on the good things going on within Goose Creek.

At Conroe ISD, he was the vocational marketing coordinator for two years, and he has taught marketing education, mathematics, science and physical education, along with coaching a variety of sports.

OBrien was nominated as Region 12 Superintendent of the Year by the Board of Trustees of Hubbard ISD in 2011-2012. He also was selected as Outstanding Administrator in the Region 4 Excellence in Education Awards in 2005. Chosen as a presenter at the SERA Conference in New Orleans in 2012, his topic was Commonalities that Exist Between High Performing Schools.

END_OF_DOCUMENT_TOKEN_TO_BE_REPLACED

Cavazos steps down amid controversy

BAYTOWN  On August 7 the Board of Trustees of Goose Creek Consolidated ISD authorized the President of the Districts Board to accept the resignation of Dr. Salvador Cavazos, Superintendent of Goose Creek Schools.

Board member Agustin Loredo III stated, It has been a tough couple of months for me.

I am very sad that this has happened. In our district a lot of the things these groups are now saying are not true. But, I cant argue because perception is always stronger than reality.

Then he quoted figures for the academic standards that have yet to be released.

He said We have the lowest student turnover rate in the last five years, right now.

There seems to be at issue if reassigning 8 principals to lower rank and pay and the announcement of 12 new principals was a restructuring to meet standards or restaffing for conformity to the demands of the superintendent. Also at issue was spending $14.4 M. on a project from the general fund at Lee High School that was to have been a $10M. project by the bond committee.

There were two closed sessions and a 15 minute recess. During the last closed session, Loredo was giving an interview to a television station.

The last item on the agenda was to determine if the special meeting on August 11 was necessary but that meeting was necessary to approve new hires and accept resignations. On August 12 educators had to begin new training.

A motion to accept Mr. Randal OBrien for acting Superintendent was made by Melo and seconded by Jenice Coffey. The motion passed unanimously.