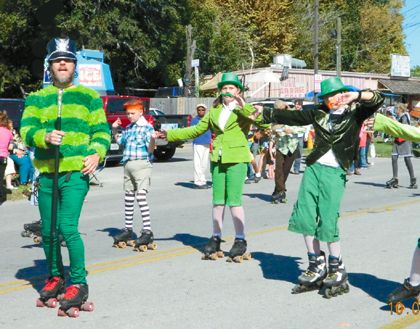 HIGHLANDS  Theres No Place Like Highlands was imaginatively displayed in the parade units last Saturday, as the community enjoyed the many floats and units that keyed on the yellow brick road theme of the artwork, and took cues from the classic Wizard of Oz movie.

The 58th annual Highlands Jamboree was held under some of the best weather possible, cool and sunny and perfect for a parade. About 100 units participated, and with two marching bands, 22 Miss Highlands and Jr. Miss Highlands Pageant entrants, and 11 fire vehicles, the participants numbered close to 500. Parade watchers stretched from E. Houston Street to Jones Road along Main Street.

The Jamboree is a benefit fund raiser for the Highlands Lynchburg Chamber of Commerce, and is now in its 58th year, having started in 1955 at a celebration of the opening of the new Highlands State Bank.

The day started with a 5K Fun Run/Walk at the Community Center, benefitting Habitat for Humanity.

Next was the traditional parade, with Weston Cotten, last years Terry Davis Award winner, as the Parade Marshal in the lead car. The Terry Davis Award goes to a person who emulated the namesakes unselfish work to better the community.

After the parade, the crowd moved to the Highlands Elementary School, where the Childrens Pageant was held, as well as a silent auction and crafts booths. A large crowd was present, almost filling the multi-purpose room, as children from 0 to 11 years of age competed in the Lil Miss & Mister Highlands Childrens Pageant.

Named as Little Mister Jamboree was Jagger Constance, an adorable young man who exhibited a swagger and self-assurance among all those girls and a huge audience.

The Little Miss Jamboree was won in seven categories by age, see the list on page 10.

The crowd at the school was so large that the refreshment stands ran out of food and closed early.

The final event of the day was judging for the Car Show, under the direction of Dickie Woods. Doug Cox won in 3 of the 4 categories.