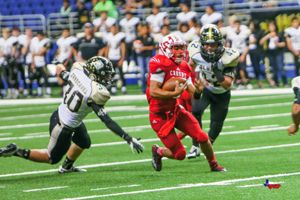 SAN ANTONIO  Port Lavaca Calhoun was stunned by the first play of the game, as the Cougars Craig Williams returned the starting kickoff 90 yards for a touchdown, in the first 12 seconds of the 5A Division II Region III playoff round. Then the Cougars went for a two-point conversion, just to ice the cake and led 8-0.

Hoping for a home field advantage because they were playing in the Alamodome, Calhoun was not to see any points until halfway through the third quarter. Crosby scored two touchdowns in each of the first and second quarters, and led at halftime 29-0.

It was the sign of a hard fought game, that Crosby had 5 penalties for a 60 yard loss, and Calhoun had 7 fumbles to set their offense back.

In the second quarter, Crosby scored 7 minutes into the period with an exciting 55 yard run by Carlos Grace, and then an 11 yard TD run by Craig Williams with 3 minutes until halftime.

Crosby had a balanced attack, with passing 6 for 11 attempts and 107 yards. However, they had 2 interceptions, and that is how Calhoun scored their first points, in the third quarter. Joe Caldera intercepted a pass for a TD and the first Calhoun points, making it 29-7.

Crosby scored again in the third quarter on a 5 yard run by Emmanuel Netherly.

The final score of the game was by Calhoun, with 6 minutes left QB Gavin Trevino threw an excellent 48 yard pass to Trey Ross for their second touchdown. The final score was Crosby 36, Port Lavaca Calhoun 14.

Next game for Crosby Cougars vs Brenham Cubs, Saturday at 6:00 p.m. at Conroes Woodforest Stadium.

END_OF_DOCUMENT_TOKEN_TO_BE_REPLACED

HIGHLANDS, CROSBY, BARRETT STATION, HUFFMAN  Harris County Precinct 2 Commissioner Jack Morman has his Senior Director of Infrastructure, Jeremy Phillips, working to find what these areas need and so far he has made a long list.

We have made numerous improvements and repairs to this areas parks.  said Philips talking of exciting changes for local kids to the area parks.

Riley Chambers Park  Renovate restroom, repair concessions stand, and addition of a new press box. In the process of wrapping up a Master Plan for the park. Identifying additional projects for this park in the near future.

IT May Park  Ongoing improvements to the fields and infrastructure. We have completed the installation of anew on-site septic system and drainage improvements. We are working on adding to new additional baseball fields.

We are wrapping up the  BetterStreets2Neighborhoods Project that includes Ramsey Road and Old Atascocita Road at a cost of $1,829,638.  said Phillips.

The concept of this program is to protect the taxpayers investment in our infrastructure by maintaining what we have. We plan on continuing additional overlay and road maintenance projects in the upcoming fiscal year in the Crosby/Huffman/Highlands area. 

Widening the intersection and the lanes near the intersection of Krenek at FM 2100 to improve the efficiency of traffic in the area; to include easier and safer turning movements for busses accessing Krenek from the Crosby ISD facility.

N. Main at FM 1942 – widening the intersection and the lanes near the intersection to improve the efficiency of traffic in the area; this is a joint effort with TxDOT. TxDOT will install the light and the County will widen N. Main to accommodate dedicated turning lanes at the intersection.

Crosby Lynchburg Phase 1  FM 1942 to Arcadian Road widen to 5 lanes (including a center turn lane). Bids are being evaluated and construction should begin after the first of the year. Philips said detailig projects funded and about to start.

Crosby Lynchburg Phase 2  Arcadian to Magnolia widen to 5 lanes with a center turn lane. Bid after the first of the year so construction will be continuous. Our partners at TxDOT are wrapping up the design portion of US 90 to FM 1942  once constructed TxDOT should provide a widened road between US 90 to FM1942.

END_OF_DOCUMENT_TOKEN_TO_BE_REPLACED

CROSBY  Soon a Lifeflight helicopter will be able to land in this area inspite of most rain or harsh weather thanks to the efforts of local first responder tax entities. This will benefit victims of mayhem from as far away as Chambers and Liberty County.

This area will have an instrument guided emergency heliport, the only one in Unincorporated Harris County and about a twenty mile circumforance at Crosby Volunteer Fire Station #1 on U.S. 90 once agreements and construction have been completed between HCESD#5 (the tax collection agency for HCESD#5 the ambulance service of Crosby, yes they have the same name) and HCESD#80 the tax collection entity for Crosby Volunteer Fire Department.

Agreements have been in the works for nearly a year now, both agencies have lawyers carefully going over who will pay for what. The Crosby Volunteer Fire Dept.s tax collection entity HCESD#80 signed an agreement on Nov. 11 and sent it to HCESD#5 for review.

The next phase to complete this life saving marvel is to have a contractor and architect hired to begin the work.

There are two parts to this modern marvel. Part one is a heliport, a physical landing area at Crosby Volunteer Fire Department Station #1 to be built near the retention pond that is to be built for a helicopter to land and pick-up patients to be flown to trauma centers like Hermann Memorial. Then there is to be an instrument guided flight plan path that when weather obscures vision or otherwise offers challenges to normal, visual flight this F.A.A. approved flight plan guided by Global Positioning System can be used to have a helicopter safely touchdown at this location from the hospital.

Flight plans are documents filed by a pilot or flight dispatcher with the F.A.A. prior to departure which indicate the crafts planned route or flight path. Flight plan format is specified in the ICAO Doc 4444. They generally include basic information such as departure and arrival points, estimated time en route, alternate airports in case of the unexpected, type of flight (whether instrument flight rules [IFR] or visual flight rules [VFR]), the pilots information, number of people on board and information about the aircraft itself. Flight plans are highly recommended, especially when flying over inhospitable areas as they provide a way of alerting rescuers if the flight is overdue. IFR flights, flight plans are used by air traffic control to initiate tracking and routing services. For VFR flights, their only purpose is to provide needed information should search and rescue operations be required, or for use by air traffic control when flying in a Special Flight Rules Area.

This will provide much expanded Lifeflight capability for the Crosby area and a radius of about 20 miles around. It is expensive to put together and both the ambulance and fire departments tax entities have carefully trimmed cost while making sure to provide high standards for all equipment involved.

It will have all F.A.A. required lighting for landing at night, said Randy Foster of ESD#80.