CROSBY  A six and a nine year old boy were killed and two adults were taken by Life Flight helicopters to Hermann Memorial Hospital with critical injuries following a head on collision on Thursday, January 15 on the Beaumont Highway near the San Jacinto river.

Harris County Sheriffs Accident Investigator Deputy R. Wagner indicates the wreck occurred at about 6:25 p.m. between a 2007 Chevrolet Equinox, westbound in the 19200 block of Beaumont Highway and a 2014 Chevrolet Malibu traveling east.

The Equinox driven by Mrs. Figley, a school teacher at Crosby ISD, had the two boys, both pupils within Crosby ISD, in proper restraints and the Malibu was driven by a graduate of Crosby High School two years ago. The driver of the Malibu was determined by investigators to have attempted to pass another eastbound motorist and lost control of the vehicle and crossed into the westbound lane striking the Equinox head-on.

Beaumont Highway is a single lane in both directions and there had been heavy fog reported near the river the early morning before the afternoon crash.

This crash remains under investigation by the Harris County Sheriffs Office Traffic Division.

Much of the local school district was stunned by the loss through press time.

END_OF_DOCUMENT_TOKEN_TO_BE_REPLACED 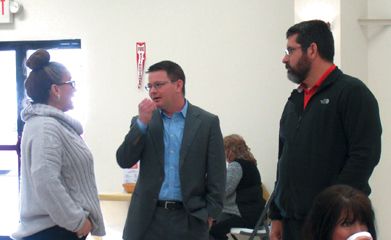 CROSBY  For those of us that have experienced delays going to work, Jack Morman is working on alleviating that situation.

Precinct 2 Commissioner Jack Morman addressed the Crosby-Huffman Chamber of Commerce on Jan. 15 concerning projects being done and those that are proposed as works in concert with other governmental agencies.

We have great partnerships with the ISDs as well as the State, he said, It is easy to see us working together and we can accomplish so much more than if we are all on our own doing our own things.

So we have to work very closely with (Texas Rep. Wayne Smith) and the state to make sure that after the design, we actually have the funding to move forward with construction. If we make our improvements and they dont make their improvements, well still have a bottleneck, itll just be a bottleneck in a different place.

In fact Morman called Wayne Smith one of the most powerful men in the House when it comes to infrastructure projects. He is an engineer and understands the process.

The bigger project for this area is FM 2100, Morman indicates the roadway project amounts to over a billion dollars.

The infrastructure widening of FM 2100 south of U.S. 90 to F.M. 1942 is entirely within the states hands but Morman indicates it is a project pending a contract with the State. And that TXDoT is finalizing designs to make that portion fit with Precinct 2s design to widen FM 2100 through Barrett Station.

The first question answered by Commissioner Morman was that he and most of the other Commissioners on Harris County Court were in favor of spending the balance of the $29 million dollars awarded to the county from the lawsuit concerning the Waste Pits near Interstate 10 on environmental concerns in the area.

While that may relieve some concerns, that award in total hardly comes close to an amount needed to clean up the waste pits. Certainly it will take partnershiping to make some of northeast Harris County a safe place to live.