PatrickBrown named Firefighter of the Year by Highlands Fire Department 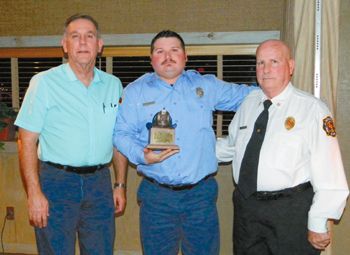 Named to the top award as Firefighter of the Year by popular vote of the firemen, was Firefighter Patrick Brown, who also received awards for Top Ten Responder (2nd high) and 5 Year Service Award.

Brown had 252 responses during the year, almost one per day.

Chief Little also reviewed the department accomplishments and history of service calls for 2014. Safety remained a priority, with no major at fault accidents. A new Dodge Diesel ambulance was put into service, and two new engines were ordered, to replace E17 and E27. They will be put into service in the first quarter of 2015.

Sleeping quarters for firemen were built at Station 17, and design work was started to rebuild Station 27 on E. Wallisville Road.

Little said that goals for 2015 included purchasing 20 new radios, upgrade bunker gear, and increase the number of volunteers, which now stand at 44.

Glenn Chisholm reported on accomplishments in the training of new members, and training and certification of existing firefighters.

Tracy Neathery reported on EMS accomplishments for 2014. The department has a new Lucas mechanical CPR device. Their heart monitor is a sophisticated device that has 12 leads. This department now has 20 part time paid crew, including 4 EMT, 4 Intermediate, and 12 Paramedics. One ambulance is manned 24 hours, 7 days a week, every day of the year. The other ambulance runs at Peak Hours, 8 am to 6 pm. In the last year, they had one CPR call where the patient had no response in cardiac arrest, and the crew was able to revive him to funn recovery.

Chief Little reviewed the history of the department for 2014. He noted that there were 2234 calls for service: 1768 EMS calls of which 984 required transport to a hospital, and 426 fire calls. Life Flight was called 19 times. The department responded to 161 Motor Vehicle Accidents. Little noted that the totals were all up about 10% from the previous year, and attributed some of this to population growth, and more capability in the HVFD department.