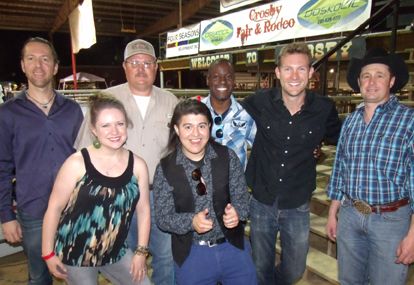 CROSBY  Certainly a lot of records were smashed for the Crosby Fair & Rodeo Spring Dance that added a lot of spice with Crawfish Shacks famous fair, vending by the Crosby-Huffman Chamber of Commerce and renowned and soon to be renowned live music performers.

The auction at the First Annual Rockin C Crawfish Festival brought $27,150 and that did not count the silent auction. Bill Busby called the auction and cited it as the most raised.

Generally, the Rockin C Arena was about half full the entire venue that began at 3:00 p.m. and continued until Sunday wee hours.

The original band was the Kingpins with a varied style that went throughout the wide field of Louisiana style.

The big delight of the night was the crawfish and then extra special was Uptown Drive. The story goes that Rick Loggins, Ricky Larkin and Shane Welch had been to Luckenbach, Texas looking for acts to play the rodeo and Spring Dance. The story continues that somewhat frustrated the troop had stopped on their way back in Fredricksburg at a show and beverage location. While they were there a band came on playing everybodys favorite in all the popular music genres save Bob Wills style. According to Shane Welch their boots were knocked off their feet.

Shane indicated he said to the other two, You had better book them now.

Everybody got along and the act came to find a new fan base in Crosby.

Uptown Drive out of Austin played, Chain of Fools so much like the original version this reporter was unsure if it was the most clear radio ever or live until walking near to discover it was being played by the performers on stage. The group played for hours without a drop in the vibrant energy or waiver in tonal quality.

The crowd thronged next to the center of the Rockin C to begin the live auction where seating had been placed for one of the largest crowds to attend the auction.

At the close of the night  Johnny Lee was a little hoarse but played on with the lively Urban Cowboy Band that could pick about any country lick including like Mickey Gilley.

There was something for anyone this year and the next promises to be even more of a thrill.