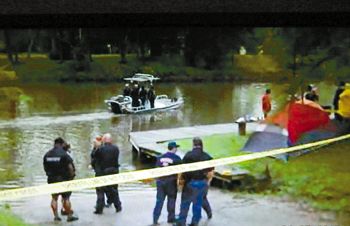 According to Capt. Don Stanton of the Sheriffs Marine Division, two young men on a jet ski were towing an inner tube with two others on it.

A second jet ski, driven by a friend of theirs, followed but lost control and ran into the tube. The result was that the two men on the tube were thrown into the water. One resurfaced, but the other lost his life vest, and did not.

Emergency personnel were called about 11:50 on Sunday morning, and after an extensive search by two patrol boats, the body surfaced and was recovered about 1:24 according to Stanton.

Witnesses said that the boy that survived received CPR at the site, but did not require transport to a hospital.

The victim is a 21 year old Hispanic male, but his name has not been released.

Standing by to aid in the recovery were the Highlands EMS and Fire Department, and ESD#5 EMS from Crosby.

The deputy said that preliminary investigation indicated that the driver of the second Jet Ski was not familiar with its operation, contributing to the accident. Other factors such as alcohol are being investigated.

No charges have been filed in the accident, Stanton said.

END_OF_DOCUMENT_TOKEN_TO_BE_REPLACED 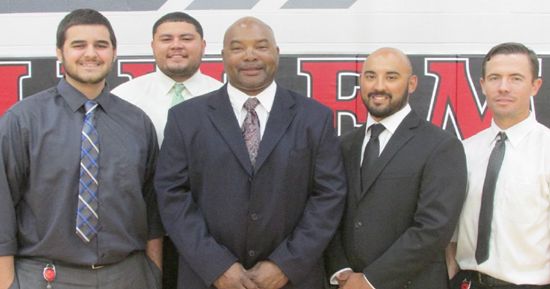 Huffman Middle School Boys Coaching staff are being recognised for their outstanding performance this year. They will be awarded the 4A and under Junior High Coaching Staff of the Year by the Greater Houston Football Coaches Association (GHFCA) on May 6th at the University of Houston.The coaching staff includes: Jerry Bradford, Chad Merchant, Earnest Pena, Chaston Pruitt, Bryan Moore, & Alex Alvarez.

According to Coach Jerry Bradford, Well, I think Coach Mac deserves most of the credit because he nominated us and what he said about us got us this honor. It was he that had us work with the varsity and after with the junior high. We are all really close, we just went to the Rockets game together the other night. There is a family atmosphere in this group thanks to Coach Mac.

END_OF_DOCUMENT_TOKEN_TO_BE_REPLACED 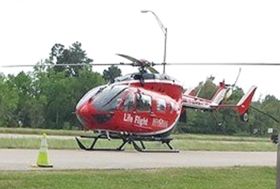 CROSBY  An eleven year old was riding his ATV Saturday at about 3:40 p.m. near Down South Off-Road when a car pulled in front of him.

The driver swerved to miss the car but the resulting accident apparently caused some trauma to they young drivers chest.

After Gulf Pump Road was closed and rescue squads responded again this week, it was deterined that no rescue was needed.

Drivers on the Beaumont Highway and vicinity need to be aware of the RackRock & Concert from April 17 until April 19.