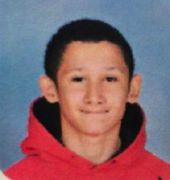 Harris County, TX – On Friday April 10, 2015, 12-year-old Joseph Glasco was was riding his bicycle northbound in the 17600 block of Janacek Road. As he crossed the westbound lanes of the 6600 block of US Highway 90, multiple vehicles struck the victim.

Only one vehicle, a Hyundai Tiburon remained at the scene to help the boy. Joseph was taken to a local hospital but died shortly thereafter.

Crime Stoppers of Houston urges anyone with information about who may have hit and killed Joseph Glasco to call 713-222-TIPS. A reward of up to $5,000 has been offered.

END_OF_DOCUMENT_TOKEN_TO_BE_REPLACED 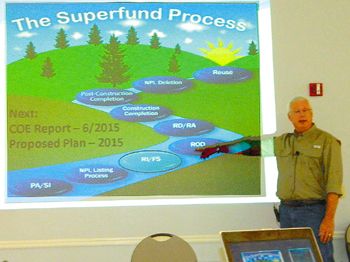 CHANNELVIEW  After a series of meetings over the last two years that have taken place in Highlands, the federal EPA agency decided to expand the audience by holding the latest meeting last Thursday evening in Channelview, at the Flukinger Community Center.

There were several obvious reasons for this change in venue. One, the study area has now been expanded to include the South Impoundment below I-10, which is closer to the Channelview residents. Two, the EPA wanted to be sure the residents on the west side of the San Jacinto River were made aware of the dangers of fishing and recreation in the immediate area next to the Waste Pits. And three, the Superfund Process is long and slow, and this change in venue makes it seem like more is happening than really is.

The audience, partially from Channelview and many from Highlands, listened to EPA staff Gary Miller, Donn Walters, and facilitator Mary Jane Naquin, give an update on the status of the process. Also present at the meeting, observing but not speaking, were the Harris County Dept. of Health, and staff from TCEQ.

Miller showed slides, which included a short history of how the wastes got to the site and when, and then a short dissertation on the types of toxins that could be found in the soil at the site, mainly dioxins and furans, with PCBs in some areas. He made the point for the new members in the audience, that dioxins are known carcinogens, and do not deteriorate with age.

He showed that the waste pits were now covered with a temporary cap consisting of a geo-membrane, with a rock fill on top to hold it in place. This cap is what the PRP, or responsible parties, want to call permanent, but many including the San Jacinto River Coalition and the Galveston Bay Foundation, feel is not a satisfactory solution.

Miller reported that the Draft Report on a solution to the Waste Pit problem, including storm studies and engineering criteria by the U.S. Corps of Engineers, due in April, has been delayed until June due to a computer crash, and then it will not be available to the public until fall, probably August. A government Superfund Review Board is meeting this month, he said, to evaluate the proposed solutions. After that, a final Report will be issued in December.

Miller said the temporary cap is performing properly, with no leaks and no subsidence seen in the monitoring that has been done.

The Final Report is expected to recomment one of the six Alternate Solutions that have been identified, ranging from leaving the cap intact with no further action, to a complete removal of the toxic materials.

This last solution, which is expected to cost $92 million dollars and take 16 months to complete, is favored by many local residents, and activist Jackie Young, who has been the spokesperson for much of the grass roots public activity. Young was a resident of Highlands until her family got sick from the water, and they moved. She remains active with the TexansTogether association, and the San Jacinto River Association.

The EPA representatives than passed a microphone to the audience members, asking for opinions and questions. Donn Walters emphasized that public input is an import aspect of evaluating the final decision on disposition of the waste pits.

Pamela Barta, mother of Jackie Young, questioned why the state or county cant test the wells for toxins. She noted that since the 2004 flood and 2008 hurricane Katrina, much of the river sediment has been pushed upstream, presumably affecting water tables and wells. Anecdotedly she said that she knows of 8 people that have died in her Highlands neighborhood in 2014, presumably from toxic intake.

Young said that tests have shown that there are over 300 chemicals present in the water and soils in the area. Oysters taken in Burnet Bay, downstream not far from the site, tested high for types of dioxins.

Jim Stouhal, from Highlands, asked whether the large amount of barge traffic that has recently entered the river near the waste pits, has affected the cap or the spread of toxins. Gary Miller said that no erosion or migration has shown up in current tests.

Miller pointed out that the study area now includes what is called the South Impoundment, an area south of I-10 near the Southwest Shipyards. He said that so far only one of 3 sites in this impoundment has shown paper mill wastes, and therefore they are still trying to determine the PRP, or Potential Responsible Party. The site also include oily waste, making them different from the sites in the North Impoundment.