Winners: Cotten for Lee College, Woods for GC School Board 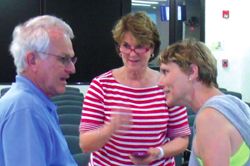 BAYTOWN  From seven candidates to three elected in the Lee College Board of Regents election held last Saturday. The three with the most votes were Mark Himsel, Mark Hall and Weston Cotten.

Cotten said at the Goose Creek Consolidated ISD Administration Building where the election results were posted immediately after the election was concluded, Its good, it really feels good. he drew a rugged breath and confessed, I hate campaigns. It worked, whatever it was, it worked. You just have to be thankful that enough people put that much trust in you  or, I was first on the ballot and they just went bonk, bonk . and hand mimicked someone picking the first name they came to on a ballot.

Cotten is a second generation Lee College attendee, he also taught there. He is a practicing attorney in Baytown and had been the longest serving Trustee for the Goose Creek Consolidated ISD Board. Cotten is the Terry Davis Memorial Award recipient for this year, a distinction awarded for service to the Highlands Lynchburg communities by the Highlands-Lynchburg Chamber of Commerce.

This is Weston Cottens first bid for Regent and he was third in the race.