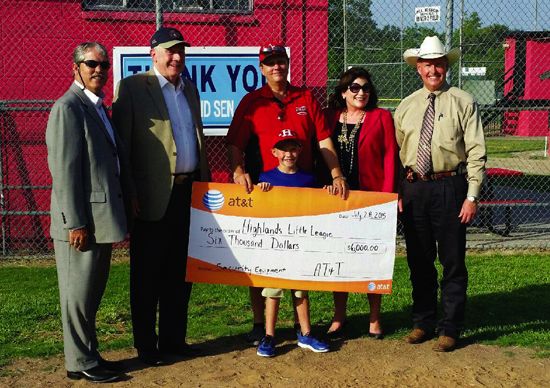 New State Law To Help In Fight Against Copper Theft

HIGHLANDS  July 28, 2015  Three incidents of copper theft earlier this year nearly ended the Highlands Little League teams season when it turned the lights off on their playing field, ahead of regular season and all-star games.

Today, those young baseball players and their families had reason to celebrate after lawmakers tightened laws to curb copper theft, and the local community and AT&T* went to bat for the team to get the lights back on their field of dreams.

A check presented to the Highlands Little League by AT&T in a community celebration Tuesday night helped cover the remaining portion of their GoFundMe goal to raise $10,000the cost of replacing 2,500 feet of stolen copper wiring that was needed to get the lights back on and increase security at the thrice-targeted field.

The ever increasing crime of copper theft has affected businesses of all sizes, churches, individuals and even baseball Little Leagues, Taylor said. This legislative effort to combat this insidious crime included the efforts and input from law enforcement and the Recyclers Association. Based on the successes of local jurisdictions who have recently passed similar rules, this law will go a long way towards reducing the number of victims in the future.

Added Representative Wayne Smith, Criminals typically target copper and other metals because they can quickly and easily convert these materials into cold, hard cash by selling them to scrap metal dealers or other metal recycling companies. Changes to state law will help curb copper theft by making it tougher on thieves to cash in their stolen goods.

Smith authored and Taylor sponsored the new law (House Bill 2187) which takes effect Sept. 1, 2015 and garnered the support of a broad coalition of businesses, law enforcement and community advocates.

Thieves looking to make a fast buck on stolen copper hurt everyone, and they quite literally nearly turned the lights out on our young Little League teams season, said Sam Tittel with Highlands Little League. From innocent kids to our churches to construction sites of families new homes, the impact copper theft has on our communities is tremendous. Were appreciative of state leaders efforts to strengthen the law and crack down on this practice, and were grateful for AT&T helping to keep our field lit and the teams baseball dreams alive.

Houston is a hotbed for this type of criminal activity. According to the National Insurance Crime Bureau (NICB), Houston has ranked among the top ten metro areas with the highest number of metal theft claims in the US. The problem is not unique to Houston. Metal theft costs taxpayers across the United States more than $1 billion each year.

Far too many innocent victims pay the price of the greed of these persistent thieves, said Sheriff Brian Hawthorne, who lives in Chambers County and serves as a Director with the Sheriffs Association of Texas. When local non-profits, small businesses or community parks see their copper stolen and their lights, air conditioning or telecommunications severed its clear something needs to be done. Were optimistic the new law will help reduce these unfortunate crimes.