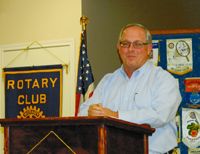 HIGHLANDS  The roadways and small businesses at the corner of I-10 and Crosby-Lynchburg Road are known locally as Four Corners and this summer they have been their busiest ever, because this is the main route for huge refinery equipment to be shipped overland to a new ethane plant in Baytown, on Highway 330/Decker Drive.

Rotarians of the Highlands club heard about the new plant, and the extraordinary efforts to ship and erect the parts of the plant, from ExxonMobil representatives David Schertz and Connie Tilton, at their luncheon meeting last August 18th.

This new plant is only one of several refinery expansions taking place in the Baytown/Highlands/Mont Belvieu area, and expected to have permanent impact on the area.

Schertz explained that these projects will create 10,000 temporary construction jobs, over a 3 or 4 year period, and add 4000 new permanent jobs to the area, including 350 at this plant.

Economists have said that the new plants in the area will add $1 billion business, and create $90 million in local tax revenue.

The new plant itself is huge, as large as 5 Disney World parks, he said. The equipment pieces for the plant, furnaces, distillation towers, quench towers, were too large to transport on normal highways, so ExxonMobil and their contractors made a new port at Four Corners, where barges could be unloaded by crane, and crawlers could carry the pieces overland to the plant site. This meant closing Decker Drive and Crosby-Lynchburg for short periods, and building special bridges over some streams and canals, to get the equipment moved down the road.

Planning for the new plant had started in 2012, and most of the equipment had to be built overseas, because American plants no longer have the capability, Schertz said.

The plant consists of 4 main towers, and furnaces, that heat the feed-stock, natural gas from shale, to 1500 degrees, and then in the distillation towers cool and compress the ethylene molecules to -100 degrees. This is the process to convert ethane gas to ethylene, Schertz said.

The heavy equipment in the Olefins Recovery part of the plant has been moving through Four Corners most of the summer, starting in April, and ending by September of this year. 170 pieces will be moved, 36 of which must arrive by barge and moved by crawlers. The largest of these pieces, a C2 Splitter is 278 feet long, it weighs 800 tons, is 40 feet in diameter, and will take over two days to move.

The Olefins Furnace part of the plant had 8 steam crackers made in Thailand. 68 pieces will require transport from Cedar Bayou up Decker Drive in a contraflow direction to the plant site. This will start in October 2015 and finish in May 2016.

The heavy equipment was all made overseas, in countries such as China, South Korea, India, Thailand, and Europe.

ExxonMobil is also moving heavy equipment to Mont Belvieu as part of this expansion program, Schertz said. This equipment is unloaded at a Cedar Bayou landing, and moved on Highway 146 and FM565 during evening and night hours.

In conjunction with the new plant, ExxonMobil is working with the Texas Workforce Commission and Lee College, and nine total community colleges, to train operators for these plants. As many as 50,000 students may be involved, and benefit from these projects, over the next five years. Lee College has already seen an increase in enrollment or 20% to 30% in their process classes.