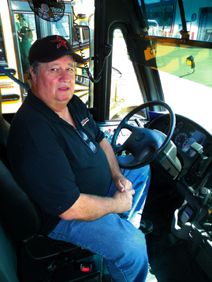 CROSBY  When parents put their kids on a bus they expect that the utmost protection is being given to their safekeeping.

David Cook is a bus driver doing what he can to keep children on his bus safe. He also is often the flag man at Battleground Speedway in Highlands and locally volunteers to help out with good causes.

On Sept. 1, according to Cook, a neighborhood woman ran screaming up to Crosby ISD Bus 74 on Port O Call, he figured it was a parent fretting about a child that was on another bus and asking if Cook would phone it in to dispatch and find the child. This happens periodically, especially early in the school year.

But this time it was different.

I pulled up to the intersection to let two students off. As they were getting off, I saw this woman running toward the bus at a 45 degree angle across a yard. As she got about 10 feet away, I saw she was talking to herself, waving her hands all over and I thought she is really mad about something. So, I got up out of my seat and went to greet her at the bottom of the stairs. She never stopped, dove past me and into, sitting on the second step of the bus. described David Cook, I told her You cannot be on the bus, there are children on the bus. You will be arrested if you stay.

She looked at me with eyes as big as silver dollars and said, Im going to bite you.

She sat there wailing and flailing her arms about when the mother of the two students that had just been let off the bus returned and told me, She tried to get in my car just before you arrived at the bus stop.

When she heard the mother talk, she sat down on the third step, put her feet on the sides of the doorway so nobody could get her off the bus.

The parent of the rider volunteered to grab the womans feet so Dave could get her off of the bus. Daves concern was even if the ploy worked, how would he get back on the bus without the woman being able to get back on the bus. He then enlisted the help of a student telling him to flip a switch and shut the door if given the signal.

When I removed her from the bus, she wound up sitting on the concrete just below the stairs. That gave me enough time to get back on the bus and slam the door.

The woman got back up off the concrete and started banging on the door to get back inside but the mother of the rider called her and distracted her just long enough for me to drive about 30 or 40 feet. So, I noticed there was a man standing, watching the whole incident watering his lawn and I asked him to go ahead and call an ambulance and authorities.

My next stop was maybe a hundred, hundred and thirty yards down the road. When I looked in the rear view mirror, I saw her walking after the bus. So, I motioned to parents that I was not going to let their kids off. So I phoned the bus barn and said to notify the parents of those kids that there was a situation that the cops would have to take charge of and I wasnt going to let the kids off at this time.

When I came back to let the kids off, deputies had her in custody.