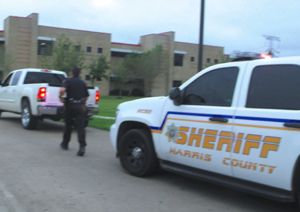 Since a video went viral on Click 2 Houston and social media of a local driver passing a school bus in the grass to the right of the bus, the Captain at District 3 of the Harris County Sheriffs Office ordered deputies to monitor and enforce laws inside the proximity of Crosby ISD School Zones.

One deputy wrote 23 tickets on Monday morning. The tickets range from speeding to passing a bus when the red stop sign has been activated.

According to Captain Jesse Inocencio, The Harris County Sheriffs Office has received complaints about people driving past loading and unloading school buses — Morning and afternoon. The Harris County Sheriffs Office District 3 Joint Task Force is conducting a traffic initiative on FM 2100 and surrounding area to include the Goose Creek and Crosby ISD. This is our second initiative this school year and we have already cited over 50 violators. This initiative began on Monday, October 19 and will continue for several weeks. We hope to get the publics attention and gain compliance with the law.

The increase in traffic enforcement has drawn a reaction already. One resident was out filming the traffic stops on FM 2100 Tuesday morning saying he intends to prove that his wife had gotten a ticket on Oct. 26 wrongfully because when she passed the bus the sign was not yet fully extended as the bus was still rolling to a stop.

He expressed outrage at the truck driver that was caught on a dash camera between 4:00 and 4:30 p.m. last Thursday on Bohemian Hall Rd. that stopped behind the stopped bus then hit the gas and drove around the side of the bus where children exit.

But the resident added, I guess about 82% of these stops are bull and we are going to alert people that this $1,200 ticket writing is out of control.

The driver of the truck has already turned himself in for the incident. However, there is a problem with commuters school zones and bus stops.

According to Dr. Keith Moore, Superintendent of Crosby ISD, I was pleased to hear that the driver of the truck turned himself in. I understand that stopping for our buses makes already difficult commutes even longer, but choosing to go around loading buses is genuinely careless, callous and dangerous behavior. Deservedly so, this driver will face significant fines and public ridicule but lets be sure to understand that this is not an isolated incident. Too many Texas drivers are playing Russian Roulette with our childrens lives everyday.

Captain Inocencio continued, Here are some myths or misunderstandings that we hear from the violators that I will address:

Myth: I dont have to stop on a four lane highway with a center turn lane WRONG: You do have to stop on both sides of the roadway  behind the bus and the opposite direction.

Myth: If there are no houses or children coming from the opposite side of the school bus then why should I stop? WRONG: you must stop if there is no center median- the law does not give you a choice.

The bottom line is that we do not want to write these tickets, our main concern is for the safety of the children and if we prevent a tragic event from happening then we are all doing the right thing.

Drivers near school districts and buses might better stay off cell phones and operate within the law or face hefty fines.

END_OF_DOCUMENT_TOKEN_TO_BE_REPLACED

Tuesday night the public heard engineers, financial experts, and the Water District board tell of the need for physical improvements to the water lines and processing facilities of the Harris County Water Control & Improvement District No. 1.

Mark Taylor, general manager of the water district, introduced Wallace Trochesset and Jimmy Flowers of the LJA Engineering firm, and Andrew Friedman of SAMCO Capital. They explained with slides and narration what work was planned for the system, and how it would be paid for.

Although the total bond package that voters are being asked to approve would total $16,000,000, it will be sold and implemented in two phases.

Phase I is termed 2016 Short Term Projects according to Trochesset. Work to be included are a digester for the wastewater treatment plant, and a control system for the existing lift station. The total for this work is about $2,500,000.

Also included in Phase I is to replace the lift station at Blue Bell, and West Houston. They are deteriorated beyond repair, Trochesset said. The Corley lift station would be removed. This work is estimated at $688,800.

Also included are renovations to the Battlebell water plant, and maintenance and recoating of the elevated storage tank, which is now 35 years old. This work is estimated at $1,977,000.

Also included are new water lines to replace aging and failing lines, on Clear Lake Road, Wallisville Road, and Magnolia and West Houston. The total estimated cost of these is $680, 600.

Trochesset said there is a Phase II, 2023 Long Term Projects that will include:

Rehabilitation of the existing clarifier No. 3 at the Waste Water plant, and treatment for phosphorous and nitrogen. This cost is estimated at $5,804,000.

Also included in Phase II is a replacement Lift Station on West Houston, and the abandonment of a left station on Corley. These projects are estimated to cost $$608,000.

The total estimated for construction costs is $12,256,400 and with engineering and legal fees the total project cost, and bond referendum amount to $16,000,000.

The bonds, and construction, will take place over the next 8 years, Taylor said. The work is necessary to keep the aging system in operation, and providing safe drinking water.

Bonds are a less expensive method of meeting costs, rather than paying for the work from ongoing water bill charges.

It was calculated that for a home owner with an assessed value of $150,000, Phase I improvements would only cost about an additional $200 yearly on the water bill. After Phase II, the cost would be $645 added to the annual water bill.