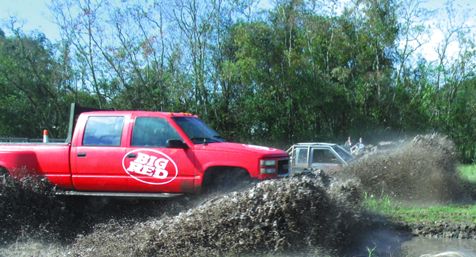 CROSBY  A throng of folks staired at mud filled ditches with breathless anticipation as ATVs, jeeps and monster trucks attepted to be the first across and still running last Sunday.

Crosby Volunteer Fire Department demonstrated how to disassemble a vehicle perfectly capable of running (donated by Turner Chevrolet) and extract people without hurting them.

Craft booths offered a wide variety of merchandise seldom found. There were consessions for the hungry and ame booths for more fun.

One of the first sights one could see were kids climbing the climbing walls and playing on the numerous inflatables.

END_OF_DOCUMENT_TOKEN_TO_BE_REPLACED 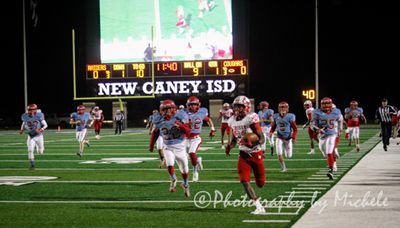 NEW CANEY  The Crosby Cougars again put on an exhibition last Friday against the Lumberton Raiders winning 42 to 13.

Coach Riordan commented on the maturity the Cougars displayed during the game, We have had the injury bug this season and we are finally getting healthy. That helps us get some consistency which helps us play better.

It didnt take long for the Cougars (about 24 seconds) to demonstrate they were the dominant team in the non-conference playoff game. Craig Sqwirl Williams blasted a zig zag pattern through the Raiders line for a 91 yard rushing touchdown.

The Crosby quarterback had an interception on their next possession and Lumberton brought it all the way to the 2 yard line before giving it back when the Cougar defense shut them down.

The Crosby Head Coach described how he educated the defense to become so powerful, Lining up correctly, make reads, and flying to the football. Effort is key on defense and then being physical.

The next touchdown came on the heels of a Tristan Cotton 32 yard pass to Trey Edwards. Juan Ochoa was perfect kicking all night.

It took nearly 3 minutes for Crosby to score again, Williams zig zagged through the middle this time for only 3 yards.

Riordan described the offensive development, We have cut down on penalties and mistakes that slow us down. We have gotten healthy and more consistent. Guys are making plays when it counts. The cohesiveness of the offensive line has played a big role.

Crosbys defense would blast a hole through the Raiders and another almost certain drive would be defeated.

Shammah Gray-Brooks snatched a 27 yard touchdown pass after Williams had amassed 145 yards with just over 8 minutes still left in the half.

Jordan Hill caught the next big touchdown pass to exit the 1/2 at 35 to nothing.

A seesaw battle raged in the third quarter, that was rocked out by Sherman McGee crashing though for a three yard touchdown.

The Raiders scored their first touchdown in the 3rd with 9 minutes left from eleven yards out. A series of turnovers, Crosby from two interceptions and the Raiders were made to fumble twice, brought it all to the one yard line where the Raiders were strapped down again and forced to turn over on downs.

Lumbertons Caleb Thomas would punch through to make the next touchdown from a yard out but the attempt for two points failed.

The game wrapped with another recovered fumble by Crosby with a minute left.

The Cougars play Ridge Point on Saturday, Nov. 21 as the visiting team at NRG Stadium on I.H. 610 near Kirby in Houston sometime between 5:00 and 5:30 p.m. or 45 minutes after the conclusion of the game before.

Cougar Nation is delirious about this, the Coach is realistic, Just another game, the field is the same size. We need to be 1-0 this week. 11-0 and NRG doesnt matter if we dont get the goal we set. #PlusOne!