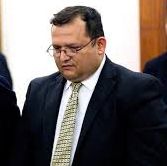 HOUSTON  Few have forgotten the morning of May 3, 2010 when learning that Kelly Danaher, 36, Huffman ISD teacher, husband and father had been gunned down on his own property.

Now, the man that was behind the pistol has been convicted for a second time of murder. The punishment phase of that trial began on Tuesday. Previously, he had been sentenced to 40 years in the penitentiary.

Raul Rodrigues got a second trail, his previous conviction overturned because the jury instructions were deemed unclear.

Rodriquez had claimed that when he went with his video camera and his pistol to a party he had determined was too loud that he was acting in self defense to shoot and kill the teacher. This was after calling in law enforcement that had patrolled to the party without incident.

Kelli Johnson, the prosecutor in the case had summerized in the latest case, This case is about provocation, pure and simple. The law doesnt allow you to create a situation and then claim self-defense.

Rodriguez had claimed that when he went to his neighbors party he had been lunged at by party attendees and was within his rights to defend himself with deadly force under the Texas stand your ground law.

In summary, Paul Sampson, Rodriguezs lawyer argued, This case is not about a loud party. Its about the split-second he had to make a decision when he was in fear for his life.

The jury deliberated three hours before reaching their decision in the last case, convicting Rodriguez. They had also viewed the videotape taken by Rodriguez of the incident several times.

The video tape clearly makes audible that the man making the tape says several times, I am in fear for my life. He had also printed out a copy of the public nuissance law and planned to use it and the video tape to authorities to make his point.

He was also recorded himself talking on his cell phone and saying he did not intend to lose to these people. A comment that presecutor Johnson did not let slip past attention. She also brought attention to his actions prior to firing twice and killing Danaher.

As the minutes tick by, he gets angrier and angrier, finally, he beckons the men from the porch out to the street.

END_OF_DOCUMENT_TOKEN_TO_BE_REPLACED

CROSBY  Newport Property Owners Association (NPOAN) awaits the closing to purchase Newport Golf Course and Convention Center but they already have a new Director of Events.

That person is none other than the President of the Crosby-Huffman Chamber of Commerce, Glenda Logsdon. She is to take this new position in December.

Logsdon continues as President until the end of November. Thereafter the new President of the Crosby-Huffman Chamber of Commerce is to be Kim Harris, the current Office Coordinator.

Nancy Gaudet announced, Newport Property Owners Association is buying the golf course. This is necessary to protect Newports property values and to protect Crosby. We are already making changes. Golfers have already seen changes in the T-boxes and the greens. We are making repairs to the golf house. We have done some landscaping and lighting. And, we havent even taken over yet. So, when we do close we will be making some big changes. Our new golf pro is Jeremy Reed. Jeremy comes to us from Evergreen and we look forward to attracting new golfers from the Baytown area. And, I would like to announce our new Director of events, Glenda.

During the monthly luncheon, Logsdon described with emotion the increasing role and impact of the Chamber in the community during her resignation speech.

Im reading a book and came across the idea that the five people you hang around with the most are going to have about the same incomes. And I thought, Im going to have to get a better class of friends.

She was interrupted by laughter.

She cited the impact that the success of Crosby Cougars football team that it not only bestows a positive contribution to the image of Crosby, it also attracts families to participate in the football program.

During the four and a half years that Logsdon has served the Chamber has made steady progress. The first change she presided over was the purchase of the Chamber Building on First Street. An initiative the board had sought for about three months. She began on August 1, 2011 the house was purchased on Nov. 11. She has elevated recognition of the chamber as being to help business and the community as a whole with the community. She facilitated the recognition by elected officials of the Chamber. And at the conclusion of her term will have added 84 new members since January.

Crosby Church hosted the luncheon and Pastor Smith spoke of the Crosby Care initiative that takes families to a local Wal-Mart bestowing a $100 maximimum to needy familes to have a Christmas. For details on helping uot with Crosby care call (281) 328-1310.