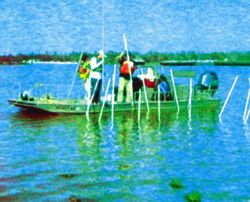 Representatives from the federal Environmental Protection Agency (EPA) met with the San Jacinto River Coalition and interested members of the public last Wednesday night at the Flukinger Community Center in Channelview.

The purpose of the meeting was for EPA to present a status report on efforts to remediate the Toxic Waste Pits in the San Jacinto River near the I-10 bridge.

About 100 persons attended the meeting, mostly residents from the east and west sides of the river adjacent to the waste pits area. They heard Gary Miller of the EPA explain new actions to repair a tear in the containment membrane, and additional requirements on the Responsible parties. These include 24/7 surveillance by camera, additional warning buoys and markers, and increased inspections on-site from 2 to 4 per year.

Miller described a process that for many residents has been drawn out too long. He said that a Draft Report on possible remediation methods is due in December 2016, and a Final Decision in the Spring 2017.

The audience was not happy with this schedule, and spoke up. Pam Barta, a former resident of Highlands whose family has suffered serious health problems, possibly from contaminated wells, asked why not deal with this on an Emergency Status. She wanted all fishing stopped immediately, toxin tests carried downriver to the Galveston Bay, and a shorter time schedule for action. She said water wells should be ordered shut down. Her own survey showed residents who look like we are in a War Zone – missing limbs, skin diseases, and more. Very Sick people. She attributed these problems to the dioxins in the waste pits.

A representative of the Harris County Polution Control Department, Bob Allen, said the county is taking proposals, due Feb. 22, on testing of wells in the area, and this would include dioxin screening for the first tiime. He said this testing is being paid for by settlement money from the lawsuit against the Responsible Parties, not taxpayer money.

Scott Jones of the Galveston Bay Foundation said that the results of these tests would be posted publicly on his organizationss website.

Another Highlands resident that raised the issue of health problems was Archie Bickley, who said that as a life-long resident of Highlands, he had developed a number of cancers, perhaps from the site. He said he has lung cancer, brain cancer, and skin cancer. He voiced the opinion we need that site cleaned up.

Gary Miller said that the EPA had a lot of concerns about the quality of work done last year on the cap, by the Responsible Parties. He indicated he would personally supervise future work on the containment at the site.

A number of other questions were asked by the audience. Scott Jones wanted to know how the site could be protected from barge strikes.

Another party wanted to know how a widening of the I-10 bridge might affect the Waste Pit site.

Miller said that the PRP would be required to make 5 new test well at the north edge of the cap. Also the south impoundment area is being studied, with sample wells and borings. He noted that the South is highly contaminated.

However, he said that sampling taken around the tear after the repairs, indicated that no toxins had been released, and no dioxin was in the river water. The issued was disputed by Jackie Young, who said that her orgainization tested wells and found dioxin.